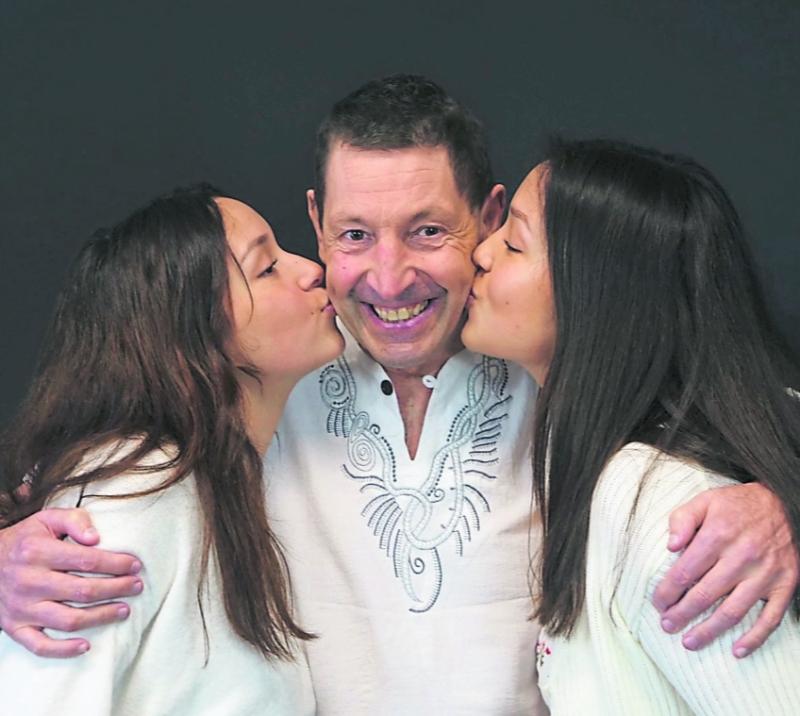 Ballymahon’s Kevin Stanbury, pictured with his two daughters Sophia and Jasmin, is terminally ill, and he hopes to raise money for Pieta House with his album that features ten songs

It only takes one person to make a difference, and Ballymahon-resident Kevin Stanbury knows that better than most. Originally from Newcastle in England, he has worn many hats, from husband and father to musician, soccer coach and fundraiser.

Kevin has spent years cycling and running to raise money for charitable causes across Longford and beyond, and despite a recent series of unprecedented and devastating health problems, he’s still giving everything he has and everything he is to help others.

Having taken part in many charity events - including a Malin to Mizen cycle which raised €60,000 for the South Westmeath Hospice - he had plans in 2019 to run the Ring of Kerry. However, he was rushed to hospital after being struck by a vehicle while training for the event.

A CT scan revealed a surprise diagnosis of a rare cancer called neuroendocrine lung cancer. According to Cancer.ie, neuroendocrine tumours (or NETs) are slow-growing rare cancers that affect the cells of the endocrine system.

The tumours are usually found in the digestive system, with NETs in other parts of the body - such as the lungs - a much rarer occurrence.

Unfortunately, the discovery of Kevin’s cancer and subsequent treatment set him down a difficult path of multiple surgeries including open-heart, a coma resulting in 14kg loss of muscle mass, mobility issues and blindness.

Despite the unimaginable circumstances he endured, Kevin - who is now in palliative care - surprised doctors and physiotherapists with his determination to regain function. He set a goal to overcome his mobility issues by re-learning how to play the guitar, teaching himself what was once second nature with sheer willpower.

Mastering the guitar once again was something to focus on to aid recovery, but Kevin had intentions beyond just that. He also wanted to give back, as he always had, by raising money for charity. With the help of fellow musicians and friends, he succeeded in recording an album of songs in aid of Pieta House, which is now available for purchase through Go Fund Me.

“The choice of charity was a difficult one,” Kevin says.

“There are so many charities in the world today, but this one in particular can help all. Suicide and mental [illness] can affect everyone, it affects children and parents and the whole family.”

Although Kevin says he had “no physical way” to raise money, he decided to use his hard-won musical abilities to encourage people to give what they could to a great cause.

His wife Pearl explained he wanted to help as many people as he could. “He understands how important care for mental health is,” she says. “He [decided] one phone call might help someone for life. It’s so important to stay alive.”

“[He] tried to do his own physiotherapy because of his fitness,’ John says. ‘He was determined, he did his own physio in the bed on a daily and hourly basis. He surprised the staff in St Vincent’s. They didn’t expect him to be doing it the way he did. He was on the verge of dying and they were amazed.

“I remember the physio said they couldn’t believe he’d done so well as to actually get up and around walking and actually get out there. That was the main feat in itself, getting him up and out and home to recover as quickly as he did, especially after going through such a traumatic experience.

“Losing his sight, discovering the operation wasn’t a success and going into theatre in such a fit state to come out like that was so devastating. It’s been horrendous ever since that day of the operation.”

John continued: “[He] is so proud and will never talk about himself and his achievements. He got going playing guitar on the album, he made himself do that. He had to re-teach himself how to play it, he didn’t have the skills to do it after the operation and to get those skills back again, it’s been a huge battle for him.”

Pearl is proud of her husband’s resilience throughout the past few years.

“He’s very determined,” she says. “He tried to get his fitness back, tried to walk to attend physio to do everything that he can. [I tried] to be there for him and give him support, and the girls, [our] daughters, were really supportive of him.”

The album was a labour of love for Kevin and his collaborators, with some of its ten songs recorded in England before the initial accident, two recorded in his front room in Ballymahon and others in a studio.

Kevin is proud to have succeeded in recording the songs for charity, especially as he was unable to lift his own guitar at one point.

Since its inception, the Go Fund Me page has raised approximately €2,500, and Kevin hopes people can donate whatever they can to the cause.

“You can buy the album for one euro or a thousand euro,” he says. “Anything will help.”

Unfortunately, Kevin says his recovered ability has returned “to square one” due to three bouts of pneumonia, but he hopes to inspire others to raise money for good causes in any way that they can.