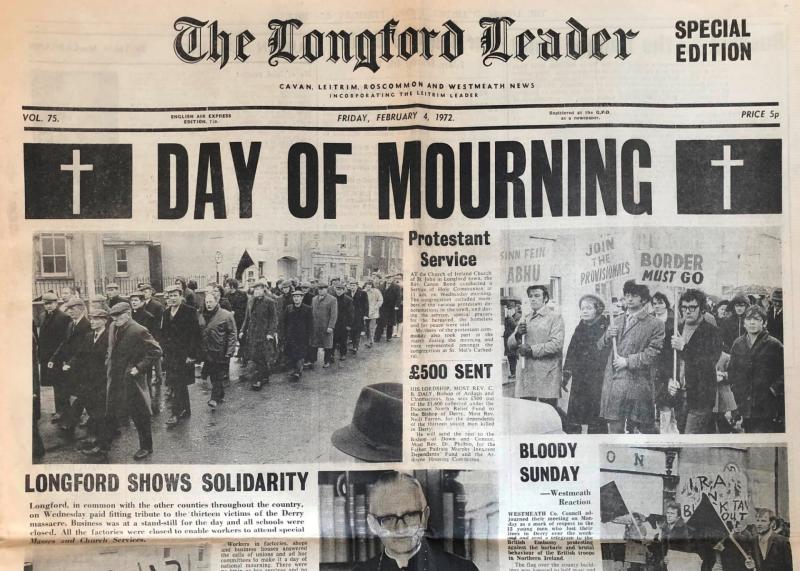 Well known author Seamus McRory, a native of Lissan parish, south Derry, has taught in a number of Longford schools and has lived in the county for many years and he is deeply involved with Longford Slashers GAA club.

He was a founder member of the SDLP, leaving active politics in the mid 70s. His sixth book, ‘Born to Lead’ was published in 2019.

On May 11, 2021 the Honourable Mrs Justice Keegan presided as Coroner over the inquests into the deaths of ten persons arising from incidents that occurred between August 9 and August 11 at Ballymurphy in West Belfast, almost 50 years earlier in 1971.

In his book 'The Dove of Peace', published in 2013, Seamus wrote a trilogy of prose poems around his memories of Bloody Sunday, which he describes as an 'awful time in Irish and Derry history'.

The poems were entitled 'The March', 'The Funeral' and 'Vindicated'.

In 'The Funeral', Seamus recalls the train journey from Belfast to Derry and back again on the poignant occasion of the funeral of the Bloody Sunday victims which he attended in the company of three other young teaching colleagues from the school he was teaching in at the time.

Seamus started his teaching career in St Aidan’s Christian Brothers’ Primary School on the Whiterock Road in Belfast. He recalls, "From 1969 onwards owing to increasing civil unrest, sectarian killings and mass destruction of properties, the everyday quality of life for everyone gradually worsened, allowing for very little normal social interaction."

Sitting, silently, uneasily in an old battered railway carriage
From Belfast to Derry,
We journeyed to Ireland’s most discriminated city
On its saddest, most poignant occasion.

All night large crowds from Derry, Donegal, Tyrone and beyond
Came to pay their prayerful respects,
To a truly courageous group of innocent men,
Cruelly cut down in the prime of life.

The panoramic view of the River Foyle
Nestled snugly beneath the church when we arrived at the hilltop.
Thousands of worried, tearful mourners thronged the nearby rain-laden streets
On that cold, dismal February morning.

All Nationalist Ireland, official and ordinary,
Were there in massive numbers.
Most others were then either unable or unwilling
To appreciate the intensity of the communal hurt felt by their fellow citizens.

Thirteen identical coffins, placed side by side,
Facing the altar in the church’s sanctuary
Was an overwhelming, disconcerting experience,
Too difficult to accept, too emotional to control.

Why, oh why, had anyone been asked
To bear such a huge personal burden?
Why, oh why, did a continuously downtrodden community
Have to suffer such humiliation, such tragedy?

Though entirely incidental,
The beautiful liturgical music of the Requiem Mass
Blended perfectly with the natural and incremental weeping of the bereaved
As the ceremony unfolded.

When the roll call of the deceased was read
We realised, for the first time, the vast significance of what had happened.
Suddenly, an eerie silence descended as priests and people
United in spiritual recollection.

The finality of death was never so stark, never so heartbreaking
As the haunting, lyrical strains of “Nearer My God To Thee”
Accompanied the mortal remains of the victims
On their last trip - to the cemetery.

We returned to the train station for our homeward journey.
Cold in body and colder in spirit.
Somewhere between Coleraine and Ballymoney
The future of our troubled land became crystal clear.

A catalytic moment had arrived.
No one who could have prevented all of this
Really understood the complexities,
The various challenges of the orange and the green, the differences between Britain and Ireland.

The course of the conflict was now altered, irretrievably
And not for the better.
Violence and counter violence, not consultation and consensus,
Would be the more likely future scenario.

Many more years of terrible tragedies, appalling atrocities surely awaited.
Before people of real vision could emerge
To mend broken hearts, change contrasting minds
In the process of uniting a divided people.