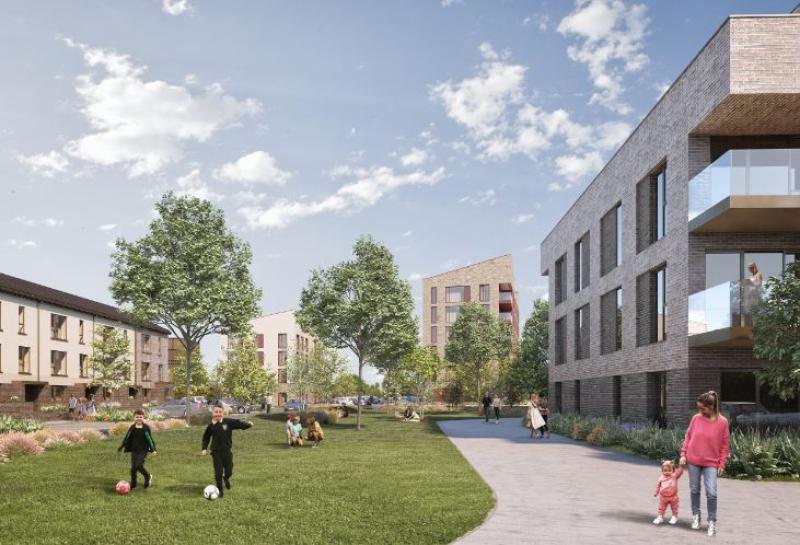 An artist's impression of the proposed student development in Athlone

Plans for a major multi million euro student campus to service Ireland's newest university have been lodged with An Bord Pleanála.

Avenir Homes Limited has lodged plans with the independent planning appeals body as part of a large scale development on the grounds of the newly announced university.

The venture, which is proposed by Longford developer and former Athlone IT graduate Mark Cunningham comprises 283 student beds along with 122 residential dwellings at Cartrontroy, Kilnafaddoge, Lissywollen and Ardnaglug (townlands), Athlone, Co Westmeath.

It is envisaged the proposal will positively contribute to addressing the well publicised shortage of student accommodation in Athlone which is having a pronounced negative impact on the local housing market.

The chartered engineer has lodged the plans to An Bord Pleanála through the State's Strategic Housing Development (SHD).

The development site, otherwise known as 'The Green Quarter' fronts onto The Old Rail Trail Cycleway where connectivity to the new Athlone Technological University (TUS) and Athlone Town centre for students and residents is proposed.

The ambitious plans comes barely three months after Athlone IT was upgraded to university status as part of a merger with Limerick Institute of Technology to form the country's third Technological University of the Shannon.

Mr Cunningham said the development was in keeping with local policy guidelines level to construct a "student quarter" while promoting Athlone as an "international student destination.

The former Athlone AIT student spoke of his own personal delight at being able to devise what promises to be one of the largest and transformational projects for his former alma mater.

“As a past student of Athlone Regional Technical College (RTC), I'm delighted to have the opportunity to apply for permission to construct a purpose built student campus which both reflects its new Technological University status and also Athlone's place as a regional growth centre in The National Planning Framework”.

A decision on the development is due to be made by An Bord Pleanála in the coming months.