'Life will never be the same again', vigil hears as Longford unites in support of family of Ashling Murphy 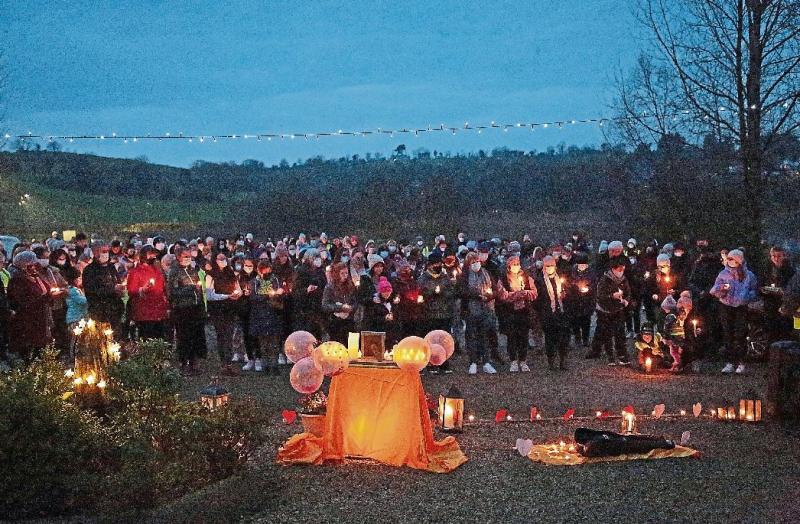 The large crowd that gathered in Leebeen Park, Aughnacliffe on Saturday for the Vigil in memory of the late Ashling Murphy

Communities from one end of county Longford to the other fell silent at varying intervals over the weekend in memory of murdered Offaly schoolteacher Ashling Murphy.

Vigils marking the 23-year-old’s insatiable zest for life and inimitable contribution to her chosen passions of music, sport and education were held in the wake of her death last Wednesday.

The most recent of those took place on the grounds of Longford’s Garden of Remembrance on Monday afternoon where women and men, young and old came together in common solidarity.

Cathaoirleach of Longford County Council, Cllr Peggy Nolan said the occasion was not one for lengthy speeches, but rather an opportunity to remember a young woman whose life had been so brutally and needlessly cut short.

As a mother and grandmother herself, Cllr Nolan told listeners to pray for the Durrow primary school teacher’s family, her pupils and a tight knit community in Tullamore who were still struggling to deal with the enormity of the past week.

“ I just want us to all keep in mind her mother Kathleen who, like all mothers whose children went to university and college, would have lit candles to see her little girl realise her dreams; to her father Raymond, who would have had so much joy in accompanying his little girl right around the midlands playing music that both of them shared and loved; to her brother Cathal who would have taken so much pride as his sister knocked it out of the ball park running up and down GAA pitches in her chosen sports and to her sister Amy, life will never be the same again because the banter, the love, the compassion and that special bond between sisters is gone forever; and to her boyfriend Ryan, a young man who had everything planned out with his beloved Ashling will have to journey now on a road that I hope God gives him the strength to start again; to the family, extended family of the Murphys, to the school community and those little seven-year-olds, may God give them the strength to be able to take in the atrocity that happened to their beloved teacher who was the nearest thing to family for those children; to the community in Tullamore and right across this nation, how privileged we are to be in a country that can be touched and show solidarity when something like this happens.”

In leading those tributes, Cllr Nolan also said it would be remiss to overlook the memories of the late Sharon Coughlan and Akadiusz 'Arek' Czajkowski who, like Ashling, died by violent means within the confines of Longford town.

Looking on to a stony silent faithful of around 150 onlookers, the Fine Gael local politician led sympathisers in a minute's silence to the hugely respected and admired Mary Immaculate College, Limerick graduate.

It was at that juncture well known local traditional musician Noel Carberry took to his uileann pipes in salute of the talented fiddle player.

There were touching sentiments too, uttered by Longford Women’s Link CEO Tara Farrell who said Monday’s lunchtime remembrance service was a day in which the much loved schoolteacher should have been beckoning her students back into class.

“But today is a day to remember Ashling and to stand here in solidarity and to offer our sympathy and thoughts to Ashling’s family, her boyfriend, to her friends, colleagues and wider community of Tullamore.

“We all know the power of community solidarity and I would hope the thoughts and sympathy we extend here offer some very small comfort to Ashling’s family in the weeks and months ahead.”