Tree of Knowledge: Stunning wooden sculpture on display at the new Edgeworthstown Library which opened its doors last week 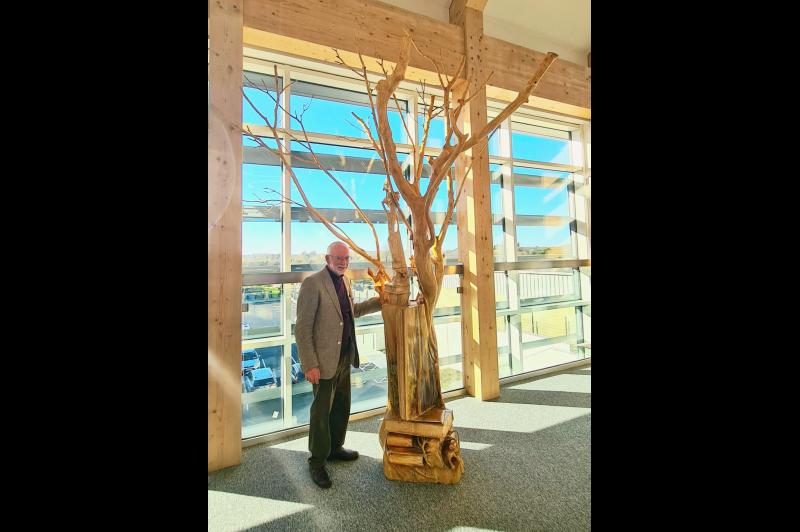 The official opening of Edgeworthstown Library in recent weeks was a huge event for the entire local community as they celebrated the addition of this beautiful, modern building on the town’s main street.

But for local artist Kevin Flood, the opening was extra special because it not only launched a new public facility, but put on show his beautiful wooden sculpture entitled The Tree of Knowledge.

“To have a piece locally is a major thing for me because I’ve always been involved in the arts and it’s lovely in your local area to have a major piece that you create over a long period of time,” he explained when the Leader caught up with him at the opening.

Kevin hails from the Legan area and has been involved with the arts all his life, attending Dun Laoghaire School of Art straight out of secondary school to pursue a career as a painter.

“That’s really when my interest in sculpting began,” he remarked.

“Because I went in initially, probably like all youngsters at the time, with the intention of pursuing a career as a painter.

“I loved sculpture from the moment I was introduced to it - carving of any description - but especially stone and wood. Those were the two things I loved to carve. The first piece, actually, I ever sold, was a piece of wood carving when I was only a student in college.”

He’s come a long way from that first wood carving and the evidence stands for all to see on the upper floor of the new library.
Stretching upwards towards the ceiling, this sculpture links in the beauty of the trees and nature with the gift of reading.

There’s even a subtle link to the Edgeworth family within the carvings of this beautiful ash.

Perhaps what makes this piece even more special to the artist is the fact that the wood used for its creation has an important link to Kevin’s own childhood.

“So the ash eventually blew down in a very unseasonable storm. It was in full leaf at the time, which is probably why it came down. And I hated the idea of just losing that tree, so what happened then was we kept a large section with a view to making a sculpture and this is that sculpture.”

You could spend quite a long time admiring this piece. The smoothness of the polished wood draws you in towards a subtle leaf pattern or a forest creature perched upon a branch.

And, Kevin explained, perspective had a huge part to play when he was carving this piece. A child, for example, would be looking at this from a lower point of view and so, if you crouch down and look up, you can take in the wonders of the artwork from below.

A little stoat popping its head out of a burrow, or carved tomes that form the base invite you to run your hands along the grain and enjoy the smoothness of it as you explore what wonders lie at the other end of the next branch.

“I wanted to show the beauty of the ash. There’s a number of things about ash,” said Kevin of his inspiration.

“First of all, it’s under threat because of the ash dying out. And it’s a particularly beautiful grain. You can see the beauty and the lustre of the grain. And it’s a tree that you can kind of take for granted because it’s a native tree and there’s so much of it growing around us. That was something I particularly wanted to explore - and the beauty of the ash as you polish it.

“But there’s another thing now about any tree, but particularly the ash. Depending on the strength of the wood, the branches will spread out in different ways and the ash is particularly elegant because the branch goes out a little further from the main trunk of the tree,” he continued, stepping back from the sculpture and pointing upwards where, yes, the branches do indeed become more elegant.

What adds to this element is the fact that there are some twigs near the very top that have been left untouched, creating a particularly striking statement on the ends of those smoother branches.

“If you ever want to look at beauty in terms of balance, you can look at a tree growing at this time of the year when the leaves are more or less gone and just study the beauty of how it balances itself. It’s amazing,” said Kevin, gesturing towards that balance on his own work.

“I spend a lot of time looking at trees in that way. And the other thing to do is to watch how the branches come out from the tree but gradually become slimmer and more elegant as they grow. So it’s very gradual and it’s really beautiful and we sometimes overlook it. When people are learning to draw trees, they don’t pay enough attention to how subtly the branch becomes thinner.

“The other thing trees do is they respond to each other’s space. A tree will try to grow straight for the most part and bring its leaves out to the sunlight on each branch.

“But it will respect the space of the neighbouring tree. So if you ever watch them, they kind of move gently away from each other as they grow. And it’s one of the most beautiful things to see in a woodland - to sort of watch how they respect each other’s space.

“So those are the key points about trees that I’m inspired by.”

Near the base of the sculpture, there are some delicate paintings of flowers and elderberries - a hat tip, if you will, to the Edgeworth family.

“The Edgeworth family were famous plant collectors and that’s one of the plants they brought back to Ireland, the Himalayan poppy or meconopsis poppy,” he explained, gesturing towards the little splashes of colour painted onto one of the carved books.

“I felt the lovely vibrant blue just brings the thing to life. And because they collected and grew it here locally I thought it would be very appropriate to have it in, plus the elderberry.

“I also wanted to have subtle things like these little leaves,” he said, pointing to one of those little hidden details, “that you’ll only see when you study it for a while.

“They’re all carved in bit by bit. It draws you in a little bit and you see these things.”

It truly is a stunning work of art that will invite even those who have little interest in such things to stand and study it in great detail. Walk around it, examine each branch and each nook or cranny and you might just find something wonderful.

“I’m delighted with this piece,” said Kevin, in conclusion.

“I was absolutely delighted to get the opportunity to create this piece. That was major from my point of view.”

The Tree of Knowledge is on display on the upper level of Edgeworthstown Library and is well worth a visit.

A great day as new library opens in Edgeworthstown