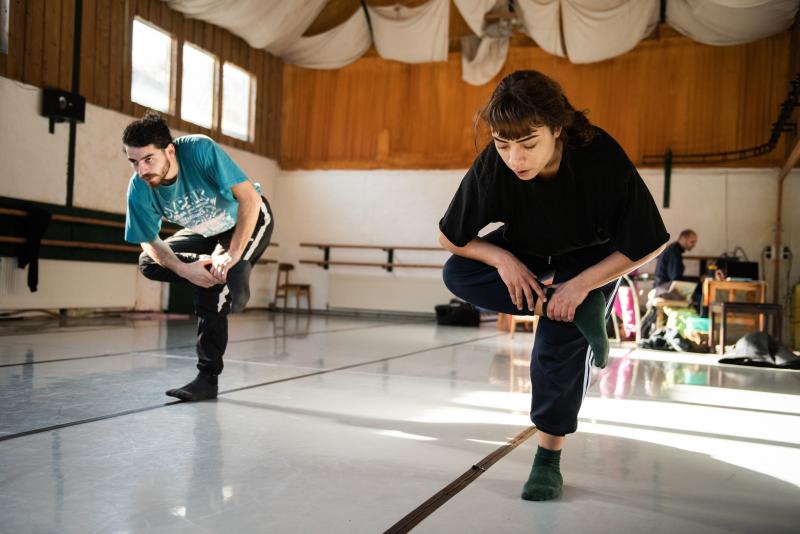 One of the dancers rehearsing for the upcoming show

All eyes will be on Longford’s Backstage Theatre this weekend as Catherine Young Dance presents the unmissable premiere of Floating on a Dead Sea on Friday and Saturday, November 26 and 27, revealing a rare and immersive glimpse into life amidst conflict in Palestine.

The production is a Dublin Dance Festival commission in association with Backstage Theatre, presented in partnership with the Abbey Theatre and this the first time in the history of the festival that an event will take place outside of Dublin.

This long-awaited production from the renowned choreographer, interweaving dance, film, music and text, will give audiences across the midlands an unmissable opportunity to reflect on one of the most complex conflicts in the world.

In 2017, Catherine Young took her dance company to Palestine to perform her critically acclaimed work Welcoming the Stranger which had premiered originally in the Backstage Theatre, Longford.

Compelled by the experience, she returned to Palestine in 2019 to find a way to share her overwhelming experience of being lifted and held by the generosity and kindness of the Palestinian people, in a place where nothing is normal. A place where everyday life, dreams and aspirations are stifled, basic rights denied, and lives lived unfulfilled.

With a cast of international dancers and stunning visuals by filmmaker Luca Truffarelli, Floating on a Dead Sea is a result of Catherine’s visits, placing the audience in the footsteps of ordinary Palestinians, allowing us to feel their enduring sense of injustice, urgency and need for action.

A chance to look and listen more deeply, especially to those whose voices are often unheard.

“Floating on a Dead Sea is a new dance and music show that I’m creating for the Dublin Dance Festival,” explained choreographer, Catherine Young.

“It’s been a long time in the making. We were supposed to premiere it last year, in 2020, but with Covid and everything, it was pushed back.

“The show is inspired by my time in Palestine. I was invited out there in 2017 to bring my show, Welcoming the Stranger, and the place really affected me as did the people.

“It was the first time I really looked at my rights and realised that I took my human rights for granted. When you’re in a place where people don’t have the right to speak out, the right to move, the right to choose, the right to express themselves. It really stuck with me.”