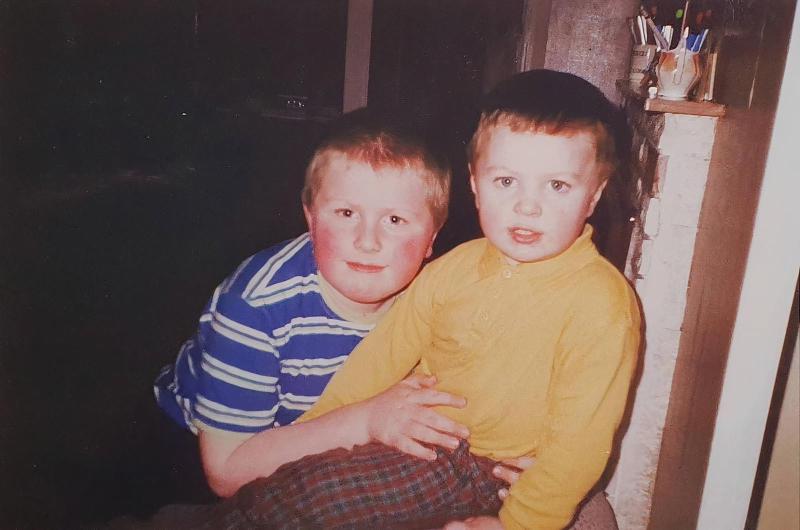 John McCord and his brother Andrew as kids. John is currently doing a Movember challenge in memory of his late brother

How many times have you asked a friend how they are, only to hear, “I’m grand”, even though you know in your gut that they aren’t? Perhaps you don’t know what to say as awkwardness begins to set in and it’s just so much easier to slip into banter.

For a year now, Stonepark local John McCord had witnessed both friends and members of the local community lose loved ones to suicide. John himself lost his brother, the late 18-year-old Andrew, to mental health a year ago and is currently embarking on a mammoth Movember challenge in his memory.

Andrew was a young man full of life, who lived for the craic. John’s distinct memory of his brother is the fact that he always dared him to do things.

“The phrase ‘bet ya wouldn’t’ became somewhat synonymous with Andrew over the years and many will have fallen victim to its magnetism,” John explained.

“It was used by Andrew as a dare or a prompt to push someone to do something ridiculous for a laugh.”

This Movember, John decided to try something different and use this phrase as the motivation behind the challenge I have set for myself - to visit 30 counties in 30 days.

“Over the month of November, along with anyone who’s up for a drive, I aim to raise €1000 for suicide prevention, explore 30 counties in 30 days, and attempt to grow a moustache,” said John.

“I’m doing this in the hope that some of those days, I’ll have someone to walk with and maybe spark up a conversation about mental health along the way. Let’s help stop people dying too young.”

He is now over halfway through the challenge and has raised over €1,500 for this challenge so far. He set a target of €1,000 and, in fact, has raised almost €10,000 for Movember since last year.

Anyone wanting to donate can do so via: https://bit.ly/3wMfsEW