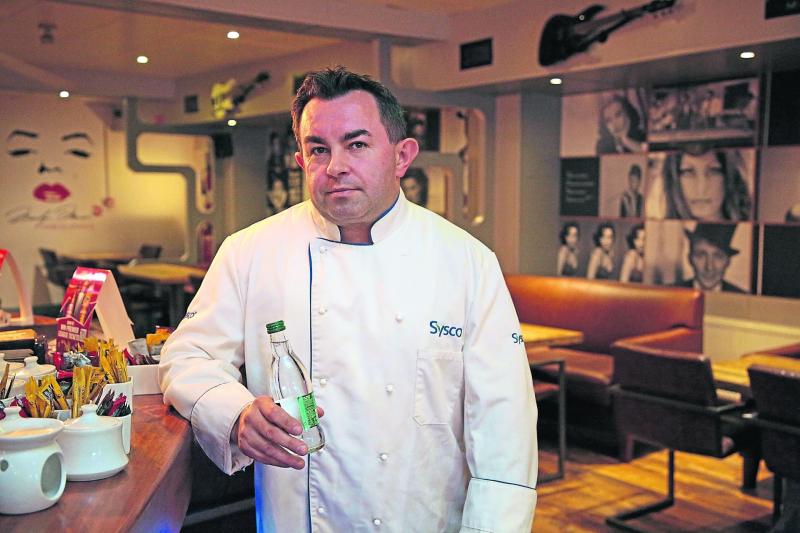 David Dowd holding a bottle of water inside his Take 2 restaurant in Longford town this week Picture: Shelley Corcoran

Irish Water bosses have been accused of failing to adequately communicate the issuing of last week’s boil water notice to dozens of hard-pressed businesses up and down the county.

A number of restaurant and cafe owners spoke candidly this week of the publicly-owned utility’s handling of a move which has left 17,500 Longford people facing into their second week without drinking water.

Two of those who spoke to the Leader this week revealed how the local hospitality industry had been effectively left in the dark by a crisis which is already threatening to derail its re-emergence from close to 18 months of Covid-19 enforced lockdown.

“I am not even sure what the problem is.

“My biggest issue is the lack of information which has been given out.

“Unless you had the radio on I wouldn’t have known.

“We are not really being kept up to date either and if it’s safe to (use drinking water) or if it’s not. The information is nil and it’s not acceptable.”

It was a similarly withering assessment from David Dowd of renowned Longford restaurant Take 2.

He said staff had fielded several complaints from irate customers over the weekend concerning its inability to serve cocktails and other refreshments because of the boil notice.

And like his industry colleague, David bemoaned the way businesses like his own were informed of the news.

In a further rebuke over Irish Water's oversight of the controversy, David called into question the utility's broader management of public water supplies.

“They were supposed to take over the running of water but no part of it is any better,” he said.

“The only thing that has changed is that they are a company that’s allowed to charge whatever they like for water that is unsatisfactory.”

Electronic monitoring of sex offenders to be allowed under new legislation

The diocese of Ardagh and Clonmacnois is looking for a new church leader following the appointment of Bishop Francis Duffy as the new Archbishop of Tuam.