Irish Water under fire: 'The whole thing is a disgrace' 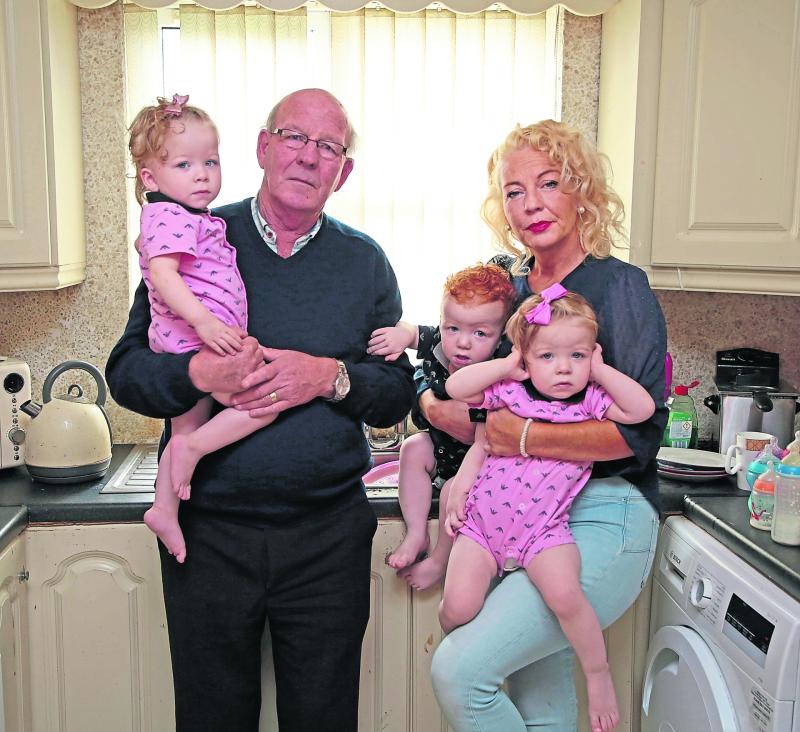 Marie Finnan at home in her kitchen with triplets Darcie, Daisy and Dominic alongside their grandfather and Marie's father, PJ Finnan Picture: Shelley Corcoran

A Longford mother to three newborn triplets has told of how she has been left at her “wits end” after a boil water notice issued last week left almost half the county’s population without drinking water.

Marie Finnan hit out at the sudden and unexpected nature of Irish Water’s decision to place approximately 17,500 people under a notice last Wednesday evening following consultation with both the HSE and Longford County Council.

The 42-year-old mother, who has five other children, spoke of her anguish at a move which has impacted her both financially and emotionally over the past week.

And, while questioning the transparency surrounding last week’s decision, Marie said she initially learned of the announcement through social media.

“I found out about it off Facebook. The whole thing is a disgrace. Yesterday I bought six three litre bottles and they are all gone.

“For me with the triplets and with the formula I use, I wouldn’t even use the water out of the tap.

“I am buying bottled water even to bathe them for the sole reason that because they were premature I would be so afraid what would be going into their mouths when washing them.”

A full time mother, Marie gave birth to triplets Darcie, Daisy and Dominic a week before the onset of coronavirus hit in February last year when the country first went into Level 5 lockdown.

Marie said her unease at what may have prompted Irish Water’s hand to enforce a boil notice was compounded by the fact her trio of newborns were 14 weeks premature.

“There are ten of us and I have eight kids,” she said.

“I can’t afford to be taking any chances, like my children were born between one pound and the biggest was two pounds.”

Marie had cutting words too for the utility provider, saying the fallout from last week’s decision had raised concerns about its ability to manage public water supplies across the county.

“It’s very hard to figure out who to blame,” she contended.

“There are so many questions which haven’t been answered.

“For a start, how long has Irish Water and the Government known about it? It’s hard to know who to point the finger at but yet Irish Water were quick enough to come looking for money and charge us for dirty water.”

Marie expressed her hesitation over the likelihood of when Irish Water might relax restrictions and called for State intervention to aid families like hers who have been left out of pocket by the move.

“There should be free water stations given out and I can’t see them (Irish Water) having it fixed by next week especially if they can’t find the source.”

Those concerns appeared to be well founded after Irish Water conceded this week it was not in a position to indicate when normal service to supplies would resume.

“Irish Water cannot be conclusive about how long the Boil Water Notice will remain in place,” a statement outlined.

“Experts from Irish Water and Longford County Council are working to resolve the issue at the plant with a view to lifting the notice as quickly and as safely as possible. In the meantime, all customers of this supply are advised to boil water before use until further notice.”

The national water utility also responded to reservations over the way households and local businesses were informed of the disruption.

“Our news section on the website was updated, a press release was shared with all local media outlets, an update was issued to elected representatives in the area and our social media channels were also updated,” the company said, adding “vulnerable” customers were contacted directly.