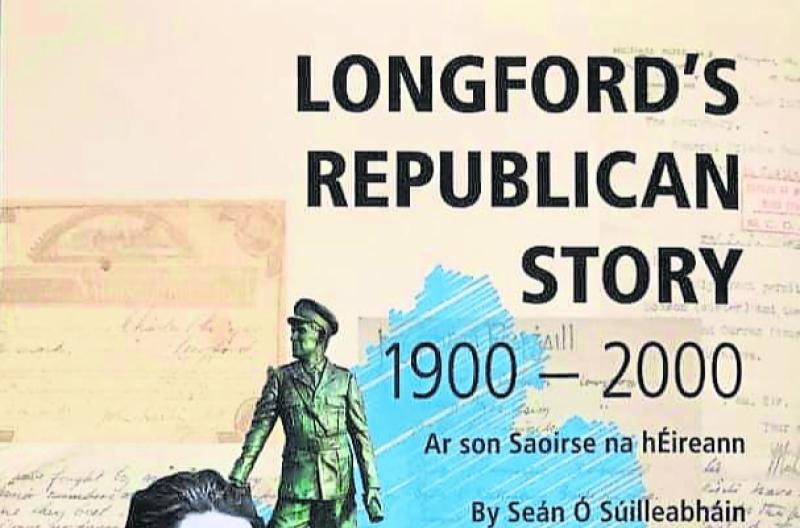 The eagerly awaited ‘Longford’s Republican Story 1900-2000’ will be launched in a series of events over the coming week.

After five years of painstaking research, the author, Seán Ó Súilleabháin, has brought to fruition the biggest and most extensive book ever written on County Longford.

The book runs to 590 pages with 450 photographs and documents.

It carries the story of Nationalist / Republican activity in County Longford from the days of the Irish Parliamentary Party in 1900, right up to the Good Friday Agreement of 1998.

There will be four launches in County Longford, as follows:

People are invited to attend whichever launch is convenient for them.

It is appropriate that in this year when we commemorate the end of the War of Independence, the most extensive chapter in the book is on that conflict. There are biographical sketches of the leading IRA men and extensive coverage of the main engagements in the county.

Cumann na mBan is also given appropriate coverage, as is the activity of Unionist groups and the Orange Order in the early part of the century.

The Civil War occupies the next biggest chapter. While Longford was spared the sort of atrocities that took place in other counties, there was, nevertheless, a good deal of activity in the county and Free State troops, under General Seán Mac Eoin, many of them from Longford, were in the thick of things in the West.

There is hardly a family, whose roots are in Co Longford, that won’t find a relative who was in the IRA during the War of Independence.

The lists of 3,223 men, as well as 969 women in Cumann na mBan, will enthrall people the length and breadth of the county.

The book covers the shooting of Richard More O’Ferrall in Edgeworthstown in 1935, the killing of Barney Casey in the Curragh Camp in 1940 and the execution of Richard Goss in Portlaoise in 1941.

Events that have seldom been given coverage before, like the Ballinalee Post Office dispute in 1953, are highlighted.

The period of the Troubles had sporadic impacts on County Longford. The Bloody Sunday killings in Derry in 1972 sent shock waves throughout the county, as happened throughout Nationalist Ireland.

The period of the H-Blocks hunger strikes in 1981 was the other occasion when Longford woke up to the reality of what was happening in the Six Counties.

There are numerous other Longford connections to the Troubles, such as the story of the Longford man who first highlighted the case of the innocence of the Birmingham Six and the Longford man who was sentenced to twenty years in England, the longest sentence ever imposed on a Longford Republican.

Taking the whole century of activity, the two figures that loom largest are Seán Mac Eoin during the War of Independence and afterwards, and Ruairí Ó Brádaigh in the second half of the century. These two men were the dominant Republican figures in their respective periods.

The Colmcille launch will be performed by Mait Ó Brádaigh, son of Ruairí Ó Brádaigh, and grandson of Matt Brady, who was seriously injured in the very first engagement of the War of Independence in Longford.

The Longford launch will be performed by Peggy Nolan, Cathaoirleach of Longford County Council.

The Granard launch will be performed by Sr Maeve Brady and Bernard Sexton. Sr Maeve’s father and Bernard’s grandfather fought alongside each other in the North Longford Flying Column.

The Ballymahon launch will be performed by Martin Morris, County Archivist.

The book will be available in shops throughout the county after the launches.

For any enquiries in regard to the launches, please ring 087 6821566. Beidh fáilte roimh gach duine.