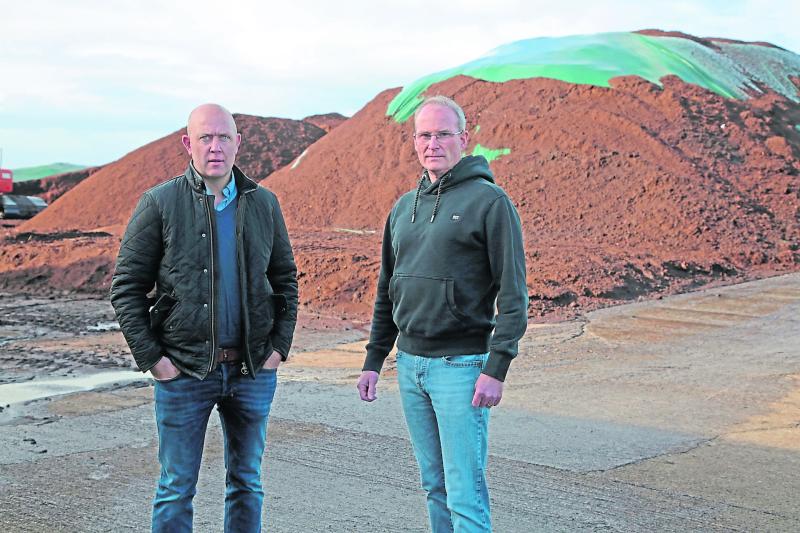 As talks of climate change, the protection of the environment and the importance of living a greener lifestyle dominate our society, you would be forgiven for believing that the ban on peat harvesting is a good thing in Ireland.

But when a country that has its own supply of peat is now importing almost 4,000 tonnes of the stuff from Latvia just to supplement the product it can no longer legally harvest, is it really a greener option?

A total of 3,600 tonnes of horticultural peat arrived on Irish shores last week - the first time in history that Ireland has had to import the product.

That massive shipment of peat was delivered to Klasmann- Deilmann Ireland Ltd., a factory which is located between Legan and Rathowen, and is now stockpiled on the edge of a bog that straddles the Longford/Westmeath border and on which the company has been working for 40 years. That bog has lain idle since 2019 when the ban on peat harvesting came into effect.

If the sheer size of the delivery hasn’t quite hit home yet, consider this: it took 200 truckloads on a 200km round trip to carry that peat from the bog in Latvia to the port in Riga. That’s 40,000km of diesel. Add to that the journey from Riga to Drogheda and you’ve got 3,000km of heavy fuel oil for the ship.

The final leg of the journey took 200 truckloads on a second 200km round trip to carry that peat from the port in Drogheda to its destination, where it sits in mountainous piles, just metres away from a bog that could have provided the same quantity without the giant-sized carbon footprint.

“Meanwhile our bogs in Ireland are emitting carbon whether we are harvesting peat on them or not,” said Kevin Mahon of Klasmann- Deilmann Ireland Ltd.

“Peat is being harvested in Northern Ireland, Scotland, England, Sweden, Denmark, Germany, Finland, Estonia, Latvia, Lithuania, Canada, and Russia… So this is not an EU problem; it is a uniquely Irish problem and if there was a willingness to allow a ‘Just Transition’ away from the use of peat in horticulture, the system could be fixed,” he added.

“Instead, there is a suggestion being presented that there is a system for companies to get regulated, if only companies in the sector would follow the system.”

Currently, companies have to go through a four- stage process for a licence to harvest peat, begining with what Mr Mahon has dubbed “permission to apply for permission for Retrospective Planning Permission”.

If granted planning permission by the County Council, the company can then apply to the EPA for a licence. This process could, again, take up to two years, with objections and appeeals - and with no guarantee of a licence at the end of it all.

“So what the Just Transition commissioner had recommended in his report was that there be a one-stop-shop set up - which makes absolute sense - that you put in one application, which would cover licencing and planning in one,” Mr Mahon explained.

“We don’t care which agency does it, whether it’s An Board Pleanála, or EPA, but just one point of contact, rather than this big long process.”

For a start-up, a six year wait to achieve regulatory approval to commence activities would be an untenable situation, according to Mr Mahon, but for a business that has already been operating successfully for forty years this is “effectively a death sentence”.

“We have only survived to date because, as a matter of policy, we hold several years of stock to protect us against the possibility of encountering successive seasons of bad weather. In addition, we have supplemented our own stocks by purchasing large quantities of peat from Bord na Mona but, now that they have ceased operations, stock is no longer available from that source.”

Hence the massive importation from Latvia. In fact, most Irish substrate manufacturers will exhaust existing stockpiles of peat in the coming months, if not sooner, which will lead to a shutdown of the entire horticultural sector.

The imported peat is to supplement the reserve supplies of Irish peat that have now been almost exhausted, forcing the sector to import peat into Ireland at a higher cost both financially and environmentally, placing 17,000 jobs across Ireland’s horticultural sector at risk.

A streamlining of the sequential permitting process is necessary to avoid the imminent shutdown of the industry and Growing Media Ireland (GMI) is now calling on the Government to secure the resumption of peat production in Ireland immediately to avoid a sector-wide financial and environmental crisis.

It is seeking a fair and workable licensing system that will provide for the phasing out of horticultural peat harvesting over a transition period to 2030, allowing alternatives to be developed but ensuring that there is a secure supply of Irish sourced growing media during that period, so the sustainable horticultural sector is not jeopardised.

Local Fianna Fáil TD Joe Flaherty last week addressed the Dáil, stating that peat producers were “aghast” at the news of such a large shipment of peat landing on Irish shores.

“Some 3,600 tonnes of peat travelled 3,000 km from Latvia. Similar, if not better quality peat could have been extracted from bogland no more than ten to 15 miles away and could have been brought on 10 km journeys.

“We are now being told by Growing Media Ireland, which represents the peat producers, that we are going to need at least two shipments the size of what arrived into the country last Saturday to meet Ireland’s peat demands for the foreseeable future.

“Peat producers are aghast, disillusioned and disappointed. They looked for a fair, equitable and workable licensing system that would have enabled them to extract peat,” he continued.

“Bord na Móna withdrew its seven applications from An Bord Pleanála at the start of the year, leaving two live applications, both of which are from a local producer, Klasmann-Deilmann, which is just up the road from me in Rathowen.

“There is surely an opportunity there for some of the Department officials to liaise with An Bord Pleanála and to prioritise and, it is hoped, get those two applications over the line to allow the producer to start extracting that peat to try to head off the absolute folly whereby we imported more than 200 truckloads into our country last Saturday - something we are going to repeat twice every month.”

The issue will also be discussed at the next meeting of Longford County Council where Legan’s Cllr Paul Ross has submitted a notice of motion requesting that Longford County Council call on the Minister for Environment, Climate and Communications and Minister for Housing, Local Government and Heritage to provide a “fast-track one-stop-shop framework” for planning and licencing for the harvesting of horticultural peat, as was recommended by the Just Transition Commissioner in his progress report dated April 2020.

“Such a streamlined approach between statutory bodies would help prevent the absurdity of 200 truckloads of peat being imported from Latvia to be stockpiled on a bog just outside Legan and would instead allow the resumption of the responsible harvesting of peat moss here in Ireland, as it occurs elsewhere in Europe,” he said.

All sectors of Irish horticulture including mushroom and small fruit and vegetable growers throughout Ireland are severely affected by the halting of peat harvesting in Ireland. But this affects all of us as food prices are expected to increase as a result of peat importation.

“It is probably fair to say that the current dysfunctional system favours the agenda of certain members of this government, so it is perhaps unsurprising that the Minister for the Environment, Climate and Communications is reluctant to make any changes that would lead to the resumption of harvesting in Ireland,” said Mr Mahon.

“It is hard to see how the current situation will benefit Ireland’s Greenhouse Gas Emissions and it certainly will not benefit the horticulture sector in Ireland. It’s gross hypocrisy and ‘Green Wash’.”

Calls for government to act immediately to save 17,000 jobs at risk
ADVERTISEMENT - CONTINUE READING BELOW