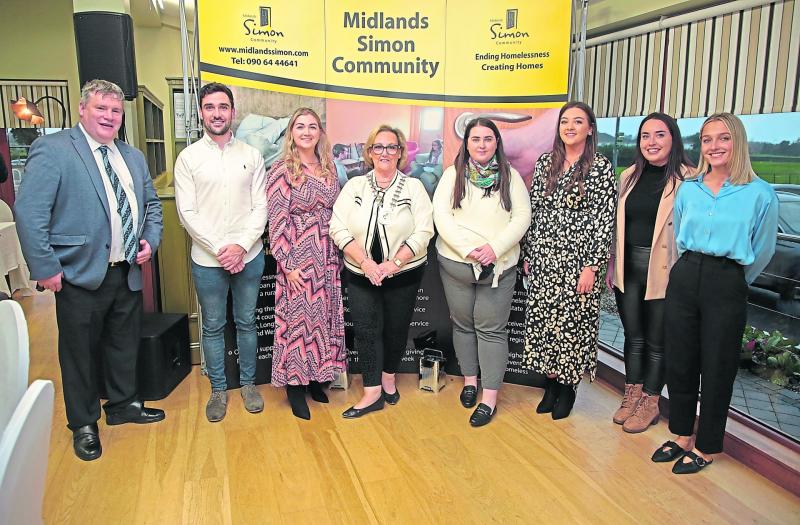 Three years ago, in June 2018, Midlands Simon Community began operating the Housing with Support Service in Longford.
The first ten residents moved into ten apartments, which have been leased for ten years at 80% of the market rate. All residents were referred by Longford County Council.

“The profile of our residents all had a history of homelessness, complex mental health and addiction issues, and at the point of moving in, some were homeless, sleeping rough and some were coming from emergency accommodation,” explained Emma Keane, Manager of the Regional Support Service.

“We had ten apartments that were about to become home for people and we were about to embark on what I can only describe to you as a memorable day for each and every one of our residents.”

Since June 2018, there have been many challenges faced by the staff but, on Monday evening at the launch of the Midlands Simon Community Report on Housing with Support Service, which took place at Longford Rugby Club, it was the happy memories that stood out in their minds.

“As a team, to have picked one (happy memory) was very hard. But I suppose for the purpose of tonight, we recall meeting one of our residents at the gate when she arrived,” Ms Keane explained.

“She stood there with a few black bags of her belongings and an artificial Christmas tree, which had lights, tinsel and the baubles on it. And when we respectfully asked her about the significance of the Christmas tree, she said ‘I didn’t have a home for many a Christmas, but this year I do, and I’m bringing my Christmas tree, if that’s alright’.

“That memory has always stayed with us as it was the summer of June 2018. But in that moment, we as a staff could already see that this person was on a journey to rebuilding their life after what can only be described as traumatic life experiences.

“And we are so fortunate that she has allowed us to continue to be part of her journey. She continues to overcome challenges by not having relapsed back into homelessness in three years and she continues to have the courage to deal with her mental health and her addiction issues.”

The staff at Midlands Simon Community and in the Housing with Support Service see firsthand the trauma of homelessness and the impact it has had on the residents at Victory Court.

Through the social care interventions provided, as well as organisational learning in the principals of Housing First and trauma informed care, visiting residents in their own homes, being on site and being acutely aware of residents’ needs, they have seen the quality of life that residents have achieved.

Commending the staff at the service, Cathaoirleach of Longford County Council Peggy Nolan said that she was “so proud” of what Midlands Simon Community had achieved, stating that she “would hope for the document to be called the Longford model”, which could be rolled out nationally. “How appropriate that it is called Victory Court,” she said, “because this is a real victory for the Midlands Simon Community.”

Also in attendance on Monday night were local Fianna Fáil TD Joe Flaherty and Fine Gael Senator Micheál Carrigy, both of whom commended the staff at the Housing with Support Service for the hard work they’ve put in to get the service up and running.

Damien Curley, President of Longford Rugby Club was also proud to officially announce the Club’s partnership with Midlands Simon Community, and saying that he looked forward to partnering on a number of fundraising events over the next three years, starting with the Sleep Out for Simon, which takes place on December 10 at the Club.

“We wish the Midlands Simon Community the best of luck and Longford Rugby Club will be right behind them,” he said.