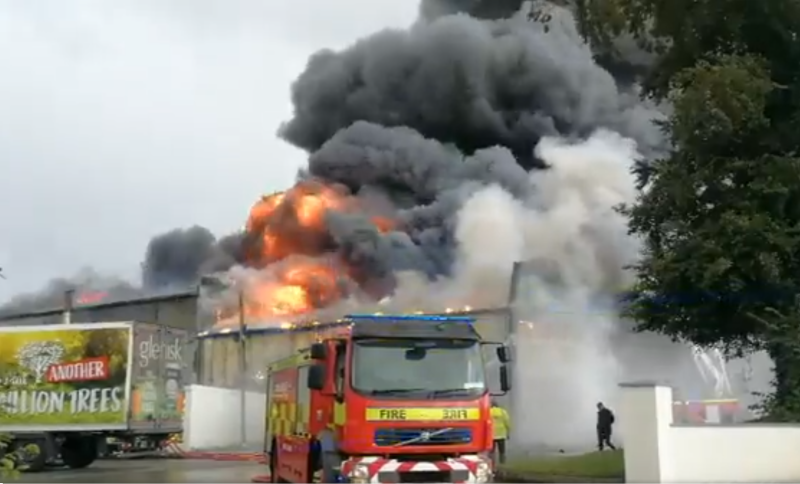 A large fire has broken out at the Glenisk plant in Killeigh, Co Offaly, this afternoon, Monday, September 27.

Emergency services, including gardaí, paramedics and fire personnel, rushed to the scene at lunchtime where thick black smoke can be seen rising from the facility.

It is understood a number of staff members are being treated for smoke inhalation.

No further injuries have been reported at this time.

Gardaí and the Offaly Fire Service are asking the public to avoid the area surrounding the Glenisk plant in Killeigh as they deal with a large fire at the site.

In a statement to our sister website www.offalyexpress.ie , the Offaly Fire & Rescue Service said it was still dealing with what it called "a substantial fire at Glenisk Organic Dairy in Newtown, Killeigh, Co Offaly."

They said the fire which is sending thick black smoke into the air around Killeigh has "resulted in damage to the plant."

Fire Brigade units from Tullamore, Edenderry, Clara and Portarlington are in attendance and 34 firefighters are currently battling the blaze, according to a spokesperson.

"The area should be avoided by the public while firefighting operations continue," the spokesperson from Offaly Fire & Rescue added.

In advice to residents in the vicinity, they said: "The public in the surrounding area are advised to remain indoors and close windows and doors."

Gardaí have also confirmed that they are attending the scene. The road between Killeigh and Annaharvey is closed as firefighting efforts continue.

It's understood a number of staff members have been treated for smoke inhalation but no further injuries have yet been reported. Gardaí are also asking people to avoid the area.