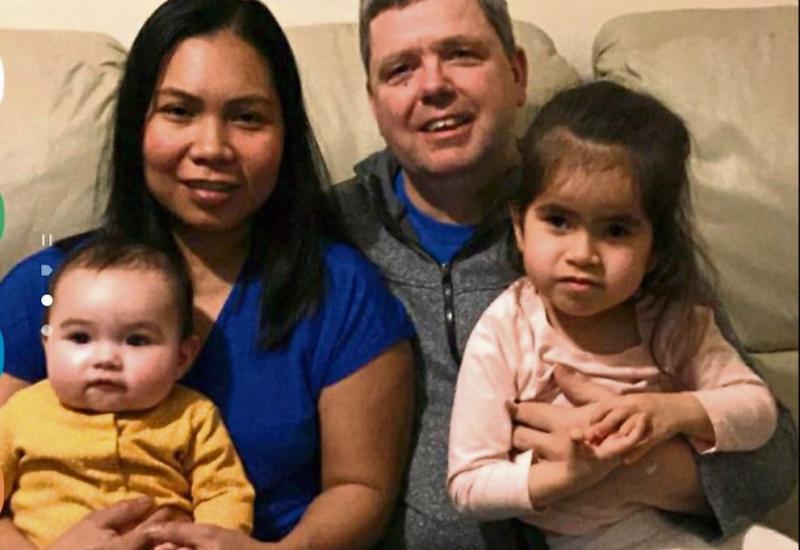 Drumlish father Declan McNeary would do anything for his children and he’s proving that now as he swallows his pride and asks the community to help him raise €20,000 to purchase a wheelchair accessible vehicle so that he can improve his daughter, Divina’s quality of life.

Divina McGeary was born in Galway University Hospital on May 17 2016.

By then her parents, Declan McGeary and Mitos Rodriguez, knew that Divina was going to have problems that may affect her life. Even at the pre-natal scans, they were made aware that Divina (whom they now call Ivy) had severe problems.

“Still it came as an almighty shock how severe when Ivy was born,” Declan told the Longford Leader, “but instead of sticking our heads in the sand, it was decided there and then that we would have to fight and make sure that Ivy got all the help that she could get.”

In 2016 Ivy’s parents decided that living in Galway might prove difficult as Declan was working as a Security Guard and Mitos was going to be the full time mum and carer for Ivy. So they moved to Longford.

“Ivy is very easy to describe,” said Declan proudly. “She is my Galway Girl and has a cheekiness about her that would melt your heart. But again that is not even a bit of the story. Since I got her into Early Intervention in Longford Town, Ivy has got help from the team there that I can only describe as first class. The Phoenix Centre where Ivy attended helped not only Ivy but myself and Mitos in so many ways.

“They helped give her the foundation where Ivy is actually now thriving and can quite possibly someday contribute to society in the distant future. That does not mean that I am expecting big things from Ivy, but what it does mean is that I must do everything in my power to make sure Ivy has the potential to reach those heights.

“To do nothing would be disgraceful to put it lightly. As a father, I have a responsibility to make sure Ivy has a future and if that means setting up fundraising campaigns, talking to media, etc, then so be it. I have to do what I have to do.”

Ivy has a bubbly personality and is a little bit cheeky at times but Declan wouldn’t have it any way. She loves to be in the car and, over the last six months with her growing and the arrival of a new baby sister in the family, travelling in the car has become more difficult.

“She really loves being outside and she has a great way of making friends as she is always smiling and all the other children while she was at creche seemed to love her,” said Declan.

Ivy is unable to walk or talk properly. She can communicate by pointing or by crying if there was something she wants, such as the TV channel changed - she’s a big fan of Peppa Pig and other children’s shows. She can move around by “bum shuffling” but she cannot stand without help.

“I can walk her upstairs but it is impossible for her to do it on her own. Her flexibility is amazing though as she can put her two legs right behind her but that is because of her condition,” said Declan.

“Ivy does not like to be held for too long as she likes to be put on the ground so she can move around. When was very young, she could not keep her food down and vomited a lot so we had to consult with a dietician who put her on a strict diet as she was not gaining any weight and was really thin. Thankfully she has improved a lot so we maintain her diet and try to add a few solids although that needs to be mashed as she is unable to chew properly.

“While Ivy will have these challenges for a while yet I am thankful for the work that my wife Mitos has put in to get her to this stage,” he added.

Ivy went to Minard Creche in Co Longford, where she was well looked after by the staff. She has just recently started attending St Christopher’s Special School, which Declan says is an “absolutely fantastic school” and that Ivy’s future “now looks much brighter”.

Because of Ivy’s condition and the difficulty of mobility with the family’s current car, Declan has decided to raise funds to purchase a motor suitable for his daughter’s needs.

“The motor that I have gone for is a Peugeot Expert type vehicle which already is wheelchair ready,” he explained.

“After much thought, I decided to ask my local credit union if it was possible to get a loan even though my finances were in dire straits.

“The car I was driving was a Ford C Max which is relatively small and very uncomfortable for my passengers even though it was a great car in my estimation. But to have two little girls in the back along with their mother was never going to work and to try and put a pram and a specialised buggy in the boot was making life very difficult.

“Ivy sometimes needs to be taken to see a specialist whether it be Longford town, Dublin or even Galway. By buying a vehicle more suited to her needs this will certainly give her a better quality of life as the stress can be taken out of every journey made. I knew that my only solution was to buy the proper motor even if I had to go into some serious debt. It was my responsibility as a father to do so.”

Declan found it difficult to ask the local community for help raising the funds for the car, which his family is badly in need of. But his determination to provide for his child is what pushed him to take that step.

“When I started this fundraiser, I was very apprehensive. Asking the public to donate their money was very difficult for me maybe because my own pride got in the way,” he admitted.

“But I have to try something in order that Ivy can have a quality of life that she fully deserves. I only hope that the General Public will take Ivy into their hearts as she is such a lovable little girl that deserves some kind of future.”

The word has slowly trickled out into the local community with friends and neighbours and kind members of the public donating and Declan is hoping that, by going public, he can spread Ivy’s story farther.

“I have had some support and I am so grateful for that. I still think though that a lot of the community are unaware of the situation I am in,” he said.

“I have tried my best to protect Ivy in every possible way to give her the space that she needs to develop. But there is no doubt that Ivy needs more help that I can give so maybe with me sharing this will help make the community more aware what Ivy has to face in the years ahead. I certainly want the best for her but to do this I have to accept that I am going to need more help.

“If this fundraiser is not successful, I will still be grateful for everything. My little Galway girl lights up my day every day and that is worth more than anything to me,” he concluded.

Donations can be made via a GoFundMe campaign at https://bit.ly/2XaRQwh.