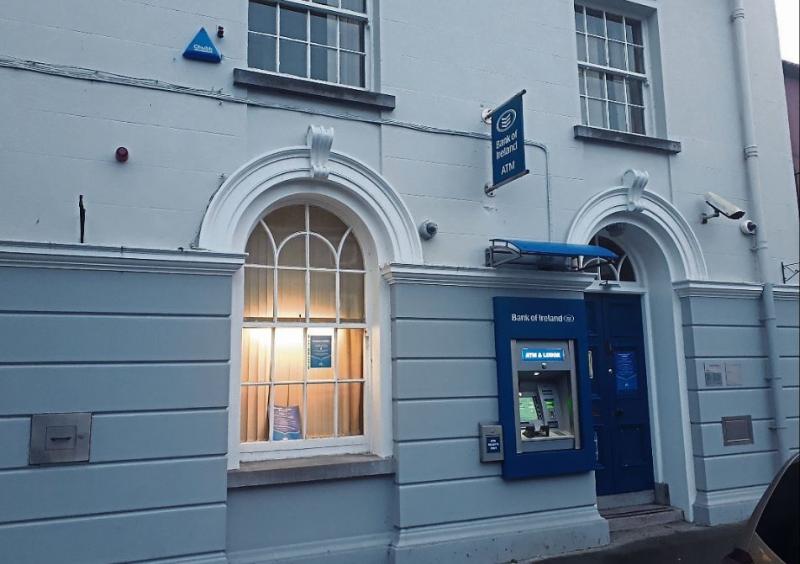 Bank of Ireland chiefs have been accused of “turning their backs” on Granard after confirming plans to withdrawn its ATM from the town next month.

A notice posted on its cash facility in the north Longford town detailed the news in a move which has sparked outrage locally.

Local Councillor PJ Reilly lambasted the decision, describing the decision as a “huge setback” for a town which will be left with no on street ATM going forward.

“It's very disappointing,” he contended.

“All that will be left is an ATM in SuperValu, but all you can withdraw out of that in one go is €200.

“They (Bank of Ireland) will say the Post Office is there for people but outside of business hours there is nothing.”

Cllr Reilly said a large slice of the despondency felt locally came largely as a consequence of the closure of the town's Ulster Bank branch in 2014.

The Fianna Fáil local politician claimed certain assurances were made over the bank's long term future in the town.

“It's not that long ago they were saying how committed they (Bank of Ireland) were to Granard and that they would not be leaving, but they have turned their backs,” he said.

Earlier this year, the bank told of how its Granard offices was one of over 100 branches to cease business from the end of September.

Francesca McDonagh, group CEO of Bank of Ireland said the decision was largely due to the changing face of modern day banking.

“Technology is evolving, and customers are using branches less, year on year on year. Covid-19 has accelerated this changing behaviour, and we’ve seen a seismic shift towards digital banking over the past 12 months,” she said

It's expected staff employed in Granard will be offered voluntary redundancy or will be redeployed to another branch or to work within its online services.

In a statement, the bank confirmed it would be removing its ATM service alongside its branch closure on October 8, but said a new partnership deal with An Post would allow for cash withdrawal services during business hours and until 1pm on Saturdays.

“Like many other companies with a large number of retail locations, and like banks across the globe, we had to change our branch services to better reflect how people are banking today,” read a statement.

“Customers have been moving away from cash to cards and digital banking, and this has rapidly accelerated in recent years.

"Customers are also choosing ‘cashback’ – where they take the opportunity to get cash back in shops when making purchases – and there are also an increasing number of businesses, including taxis, now taking card payments.”