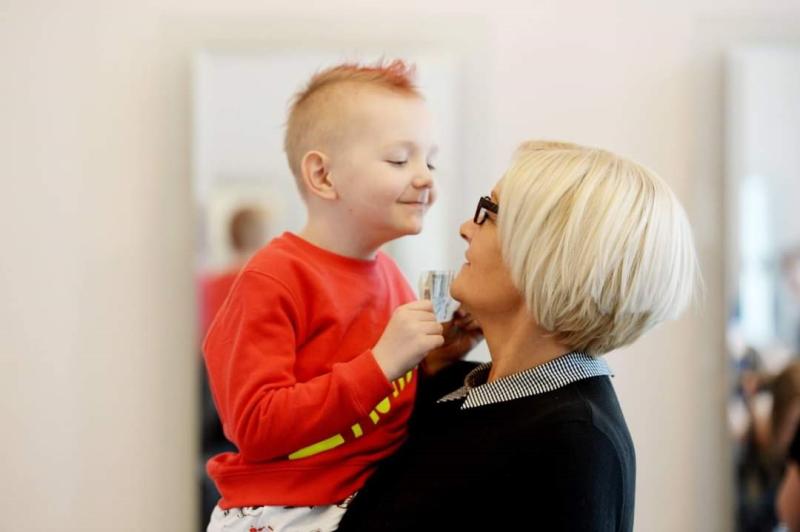 September is Childhood Cancer Awareness Month and, to coincide with the first ever Childhood, Adolescent, Young Adult and Survivorship (CAYAS) conference on September 11, a podcast series entitled Gold Ribbon Conversations has been released.

Longford mother, Cathy Birmingham will feature on the groundbreaking podcast series, which focuses on the lived experiences of people affected by childhood cancer.

The Longford town-based mother will discuss her little boy, Max Wenman, who passed away in 2018 at the age of eight.

“Our Mighty Max had an amazing life for eight years,” Cathy recalled.

“He had such an appetite for life and for fun and that rubbed off on everyone he met. He had an infectious laugh and smile.

“The focus wasn’t on him being sick because that’s not how he lived and that stays with me now since he has passed away.”

A love of wrestling was what earned him the name Might Max. Like all kids, he went through phases of loving Peppa Pig and Paw Patrol before developing a passion for wrestling.

“He had to get a lot of injections and I used to promise him a new character afterwards but that was getting expensive,” said Cathy.

“I had given away my older boy’s wrestling toys so I put a call out on Facebook asking if anyone locally had any WWE characters to sell. It was shared so much that we were inundated and were getting them from all over the world!

“They were sent over from America, the Gardaí collected loads for him and presented them to us, he got a special belt made with his name engraved on it. He was convinced he was a big warrior.

“He had a few opportunities to get into a wrestling ring and the crowd chanted ‘Might Max’ - he thought he was famous! But his favourite thing was to play wrestling with his dog Buddy. He’d have a wrestling mask on and he’d put one on the dog and they’d roll around.”

Max was diagnosed with neuroblastoma in July 2012, two weeks after his second birthday. He passed away one day after his 8th birthday in 2018.

“I know this sounds strange, but I think we were lucky,” said Cathy.

“Maybe blessed is a better word. Max had an amazing life for the eight years he was alive. He was at home with us for the last few weeks of his life and he wasn’t in pain. He was alert and talking right until the end. Everyone got to see him and spend time with him.

“Max seemed different that last day but I wasn’t sure if this was it. He used to joke with my sister and ask her for a ‘flavour’ instead of a favour, but she never got to find out what the last ‘flavour’ he asked her for was. Max’s Dad was holding him when he died and I had my hand on his heart.

“The few days after that were so important for our family and for Max’s siblings. I feel lucky that I had made so many friends when Max was in treatment. Unfortunately, some of those children passed away but having that network of women around me who had lost kids, meant that I knew what I wanted for Max and that really helped.

“Max is my favourite subject – I could talk about him all day long and I want it to be a celebration,” she added.

“When my friends come into the house, they say hi to Max (his ashes are on the mantelpiece) and we talk about him all the time. It’s not easy – people asking me how many kids I have is like a kick in the stomach, but since he passed away, I have really tried to celebrate his life, rather than grieve his death.”

The podcast is hosted by Sinead O’Moore of everymum.ie podcast and will be available from all streaming platforms on September 3.

To raise awareness for childhood cancer this September, a number of landmarks will be lighting up gold from September 1 to 7, including Dublin City Hall, Mansion House, Phoenix Monument, Convention Centre, Shannon Airport, and Dunbrody Famine Ship.

The first ever CAYAS Conference takes place from 10am to 4pm on Saturday, September 11. For more information, or to register for see www.cayasireland.ie.