New book from author who grew up in Lanesboro 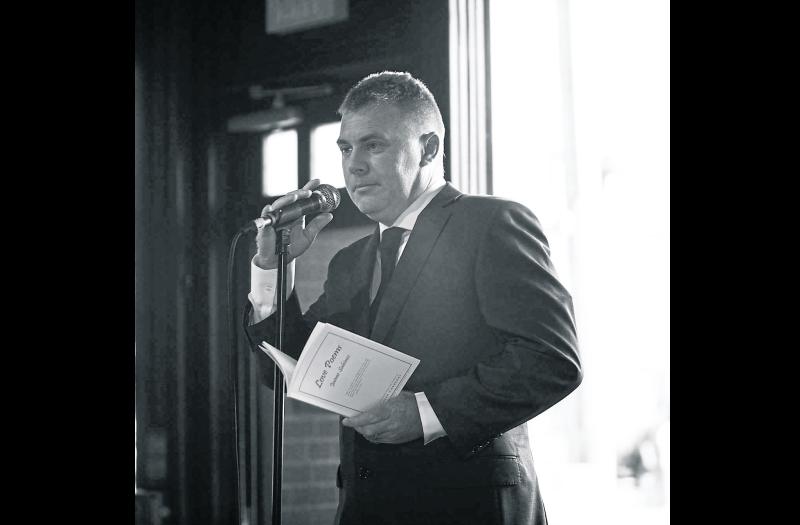 Decorated author Colin Carberry, who spent much of his early childhood in Lanesboro has spoken this week of his latest book Ghost 'Homeland: Selected Poems' which has just been released.
Colin now lives in the city of Linares, in the northern Mexican state of Nuevo León, with his wife, Verónica Garza Flores, and their two daughters, Kathleen and Emma Carberry Garza, who are 10 and six. He is an English teacher, poet and translator.
He has published four poetry collections--The Crossing, The Green Table, Ceasefire in Purgatory and Ghost Homeland--and I am the translator of Love Poems by the great Mexican poet Jaime Sabines (Biblioasis, 2011), along with an earlier volume of Sabines’s verse.
Here, he writes about his experiences of growing up in Lanesboro, representing Ireland in showjumping while attending St Mel's College and his writing career.

Linares, the small northern Mexican city in which I live, is 7,901 kilometers from Lanesboro, the small rural Co Longford town in which I was raised, but no day passes without images of my early life flashing upon my inner eye.

I was born in Toronto to Nuala Harold and Bernard Carberry, but we moved back to Lanesboro in 1975, when I was three.

On my first day in St Mary’s National School, I ran through the gates dressed in a cowboy outfit, shooting cap-guns into the air. In the playground, as we played with used tractor tyres, a girl asked me to say the word ‘butter’. When I did, she gaped. A Yank!

I spent the bulk of my time with my mother’s parents, as my grandfather, Thomas Harold, was both my showjumping instructor and boxing coach.

Along with Iris Kellett, he was one of the most renowned figures in modern Irish equestrianism. But he owed much to his wife, Kathleen (née Murphy), a strong, sensible farmer’s daughter from Cornollen, Newtownforbes.

Without her ingenuity, business acumen and thrift, he would not have been capable of financing his expensive lifestyle.

On Sundays, we would visit my father’s parents, Mary (née Ganley) and John Carberry.

Pop would let me sit in his big leather swivel armchair to watch The Muppets, while Nana fed us slices of buttered homemade soda bread sprinkled with sugar.

Originally from the townland of Mornine, they were dispossessed of their land in a legal dispute. That was how they came to live in ‘The Abbey’. They were gentle, unassuming, well respected people.

I loved camping in the woods around our old house, playing war in the ruins of Rathcline Castle, or exploring the Shannon and its islands in a rowboat.

Whenever I went missing, Tommy (as everyone called him) would say, ‘Find the nearest body of water, and there he’ll be, staring into a bog-hole.’

After finishing up at the Boys National School in Lanesboro, I boarded at St Mel’s College. The regimen was strict, but I enjoyed it.

In my second year there, I was picked to represent the Irish International Showjumping team. I was one of the best showjumpers in Ireland, competing in shows on both sides of the border, including the (Royal) Dublin Horse Show in Ballsbridge.

Sometimes reporters from the Longford Leader or Longford News come to interview me, and my classmates would begin stomping the ground and whinnying (¡)

In 1987, a few weeks before I was due to sit my Leaving Certificate, I left for Canada—which was just as well as I would never have passed Mathematics.

After graduating from St Thomas Aquinas High School in Brampton, Ontario, I studied literature at the University of Toronto. There, I met Dr Richard Greene, who read my poems and invited me to attend his writing group. Richard would also write the foreword to my debut poetry book, The Crossing

Seeking a break from the Canadian Winter, in February 2001 I spent three months backpacking around Central America and Mexico. A friend who was living in Linares, doing fieldwork for his doctorate, invited me to pay him a visit.

A year later, I returned and met my wife, Verónica, at a job interview. We now have two beautiful daughters, Kathleen and Emma.

Moving to Linares also proved to be a catalyst for many memorable literary adventures and experiences.

In the spring of 2003, a friend tipped me off that Barry Callaghan, the influential Canadian autor and publisher, would be in Mexico City to participate in a literary conference. I took a night bus down, and waited for him. Hours later, he lurched into the lobby of Hotel María Cristina.

The following year, Exile Editions published a book of my poems, The Green Table, and Weekly Diary and Poems in Prose, a translation of the great Mexican poet Jaime Sabines.

In July 2005 Veronica and I re-located to Toronto, so that I could finish my degree.

One night, I found myself reading alongside Goran Simić, the celebrated Bosnian-Serb writer and survivor of the siege of Sarajevo. Goran published my fourth book, Ceasefire in Purgatory. and included some of my work in an influential anthology of Canadian poetry in Bosnian.

On the strength of this, I represented Canada at the 49th edition of the Sarajevo International Poetry Days Festival, Bosnia’s best known literary festival. I gave readings in Sarajevo and Goražde, was interviewed on television, and was featured in both Bosnian national daily newspapers, Osblodenje and Dnevni Avaz.

I also had poems published in two important literary journals: Život and Motrišta. I continue to be fascinated by Bosnia, her people, literature, and culture.

While performing in Sarajevo, I met Marjan Strojan, a leading Slovenian poet. Marjan translated five of my poems, and in 2012 invited me to participate in the 44th Bled International Writers' Gathering, where I reported on the deteriorated state of free expression in Mexico and the state-sponsored killings of journalists.

Other than Bled, I visited Ljubljana, Piran and Škofja Loka—where I gave a poetry reading. I also met the (then) president of Slovenia, Dr. Danilo Türk, at a reception event in Vila Bled, Marshal Tito’s former summer residence.

In 2015, Jack Harte, Irish writer, fellow Lanesboro man and founder of the Irish Writers’ Union, organized a reading for me at the Irish Writers Centre in Dublin. In addition, he invited me to spend time at his Forge Corner Writers’ Retreat.

I visited nearby Alternan or the Keeve, in the footsteps of Mad King Sweeney, cursed by St. Ronan and turned into a bird.

Over the years, my poems, translations, articles and essays have appeared in numerous anthologies, and print and online and journals and newspapers in Asia, Europe, and North America. My poems have been translated into Bangla, Bosnian, Irish, Korean, Slovenian, Spanish, and, most recently, Chinese.