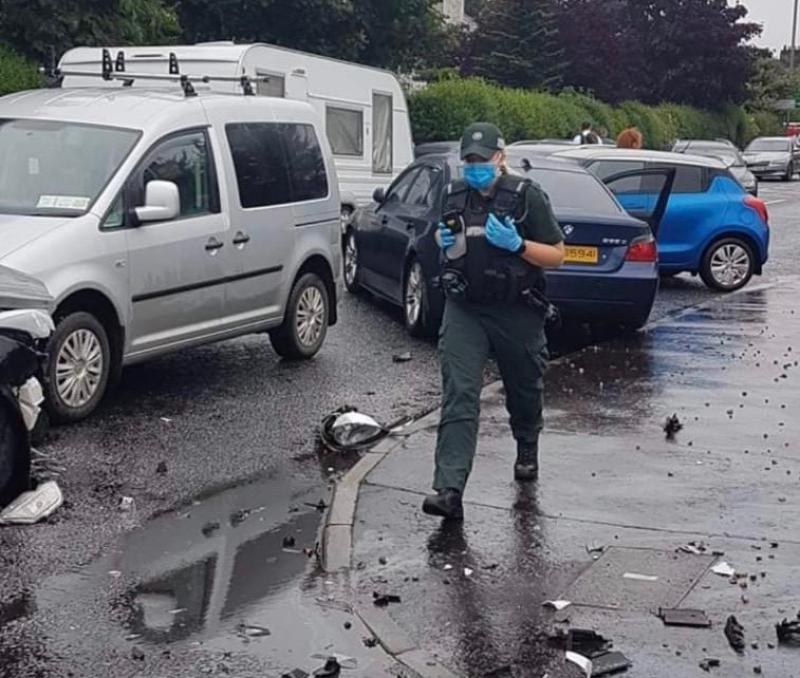 A police officer pictured at the scene of the Buncrana Road incident.

Four men and a teenage boy were today charged in connection with a violent clash in Derry this week which has been linked to a 'feud' between two Traveller families.

The five appeared at Derry Magistrates Court in connection with the incident at Buncrana Road on Tuesday afternoon.

A sixth man arrested on Tuesday is in hospital recovering from injuries sustained during the incident.

Video footage of the incident shared on social media showed a car crashing into other vehicles outside a filling station.

A number of men are also seen in the footage carrying weapons, including a crossbow and a pitch fork.

The court was told today that the violence was linked to a dispute between members of the 'Derry Stokes' family and the 'Longford Stokes' family.

It was alleged in court by one of the defence barristers that the 'Longford Stokes' had been living in Derry for the past 20 months but had recently received threats from the 'Derry Stokes'.

As a result of the threats, the barrister claimed, the 'Longford Stokes' had decided to leave Derry and were 'fleeing' from the city on Tuesday when they were 'ambushed' by members of the other family at the Buncrana Road filling station.

The barrister alleged that the 'Longford Stokes' had made police aware of the threats made to them and had asked the PSNI for an escort out of the city.

However, the barrister claimed police had declined to provide such an escort.

He said the 'ambush' happened as four vehicles in the 'Longford Stokes' 'convoy' stopped at the filling station to get fuel.

The court was told that a member of the public who was driving a car which was struck by one of the vehicles linked to the accused suffered a fractured sternum.

All three have current addresses in Derry.

Kevin Stokes is charged with a number of offences including affray; possession of a crossbow in a public place; and grievous bodily harm with intent.

Dylan Stokes is charged with a number of driving offences including dangerous driving.

Two men linked to the other family allegedly involved in the feud also appeared before the court today.

Charles McDonagh, 19, from Silverwood in Ballybofey, County Donegal, is accused of dangerous driving and possession of a number of offensive weapons.

Martin Mongan, 25, of Ballyarnett camp in Derry, is charged with possession of an article with a blade or point in a public place.

A police officer objected to bail applications for all five of the accused.

The officer said the 'tensions' between the two families 'remains unresolved' and there were concerns that there could be further violence.

In response to questioning from one of the defence barristers, the police confirmed that two caravans owned by the 'Longford Stokes' which had been left behind at Ballyarnett Traveller camp in their 'haste' to leave Derry had been destroyed in an arson attack yesterday (pictured below). 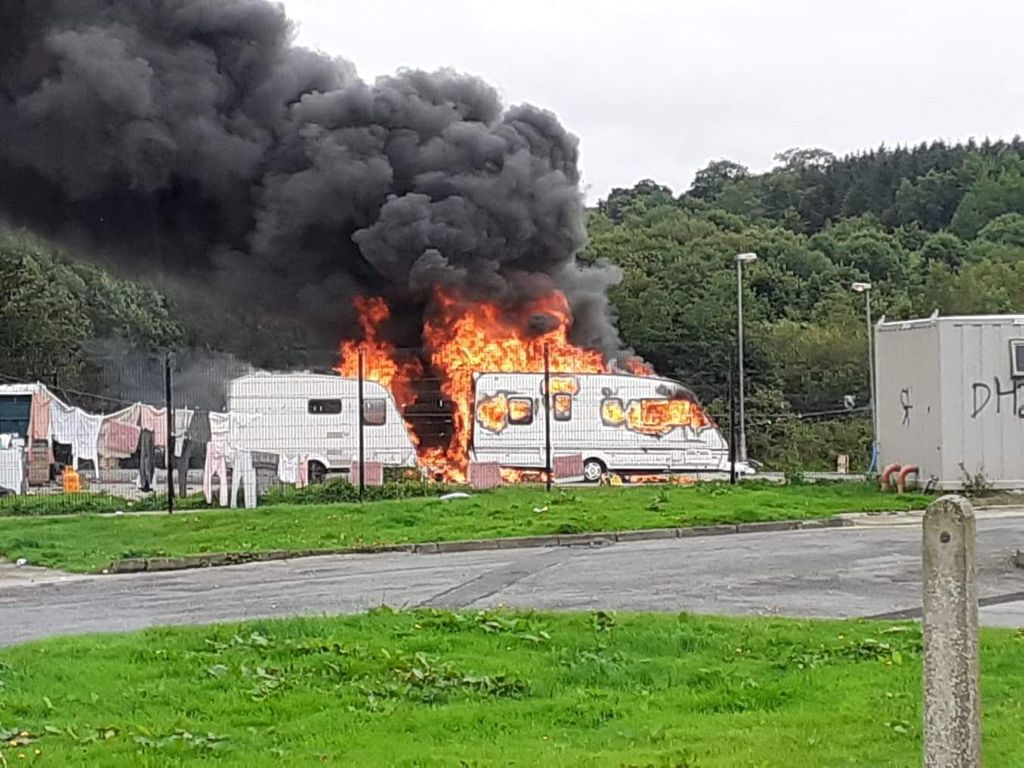 However, despite the police objections, all five were released on bail to appear again before the local court on September 16.