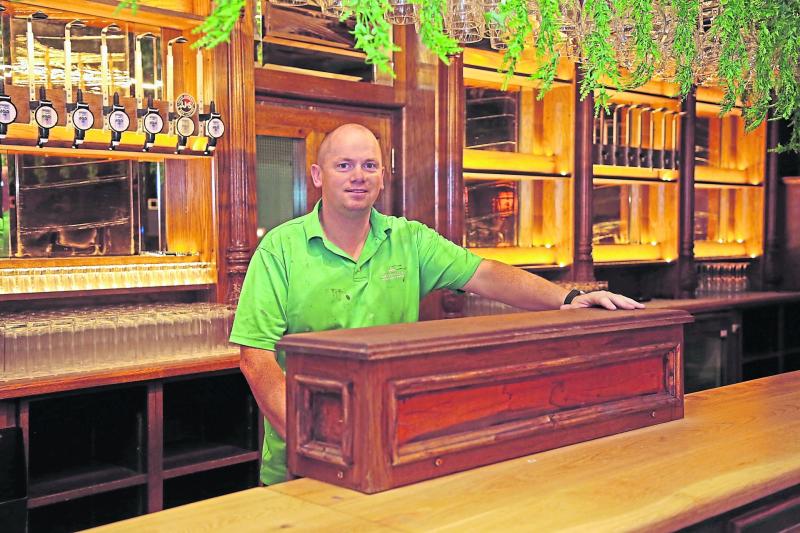 Barry Lynam hard a work as he prepares for the opening of PVs in September PICTURE: Shelley Corcoran

Over 70 job applications were submitted to PVs this summer as the newly-refurbished gastro pub prepares to reopen its doors in the coming weeks, providing 15 jobs to the local area, while bringing one of Longford town’s stellar venues back to life.

Granard-based couple Barry and Lisa Lynam have worked hard to get the Ballymahon Street pub ready for an early September opening and, while Covid-19 restrictions remain in place, they’re hoping business will be booming as things continue to reopen after a tough 18 months.

“There’s no better time than to do it now because there was a lack of places to go. There’s an awful appetite for people to get out and about,” Barry Lynam told the Longford Leader on Tuesday morning.

“People have been cooped up for nearly two years now and they’re just mad to go free.”

That “mad to go free” attitude may just be what will save the industry, in Barry’s opinion, with the potential for two or three “great years” of business once things are fully back to normal.

“We have to pay for this eventually. I think we’re going to have two or three good years of people wanting to get out for missed parties and missed occasions,” he said, accepting that the country will “linger on” with restrictions for the next couple of months but predicting a “bumper Christmas” as people start to enjoy more and more freedom.

PV Fallon’s was a well-established bar and restaurant in its time and was a great loss to the town when it shut its doors in 2013. Now, the Lynams are causing a bit of a stir around the town as news of its reopening brings back memories of great nights out or family functions to the locals.

“It was very popular but it’s been totally remodelled. There’s over half a million gone into the bar alone,” Barry explained, referring to the new up-to-date decor in the premises.

“We covered all the walls - one wall is brick and one wall is copper and stone and all the furniture is new, the bar counters are new - lights, fixtures, toilets, everything. There’s a brand new kitchen and then the room out the back is going to be a function room but that’s all remodelled as well.”

The venue will reopen in early September as a bar first, with dining options to be added soon after when the kitchen is ready to go.

“The kitchen needs a whole new fit-out, so hopefully by mid September we’ll be ready to serve food. I have the chefs and all organised, it’s just nothing to cook with,” said Barry.

An Edgeworthstown man himself, Barry has extensive experience in the hospitality industry. He worked as a general manager in a Ballinasloe-based hotel for 15 years before taking over PVs.

“So this is a small scale of what I used to do. I was feeding 200 people a night up until three weeks ago,” he explained.

“I also had a pub in Granard years ago but that was just an old pub I had with my brother. It doesn’t compare to this. This is a different animal altogether.”

If all goes according to plan, Barry and Lisa are hoping to open their doors on September 1. That’s depending on a number of jobs that need to be done but Barry is confident that, if those jobs are done in the next couple of days, they’ll be set to open on that date.

“I think the town needs it and it’s going to be a good start and if we can keep everything going well, it’ll be good. It’s another place for people to go,” he concluded.

Updates on the reopening of the popular Longford joint will be announced on the PVs Longford Facebook page.