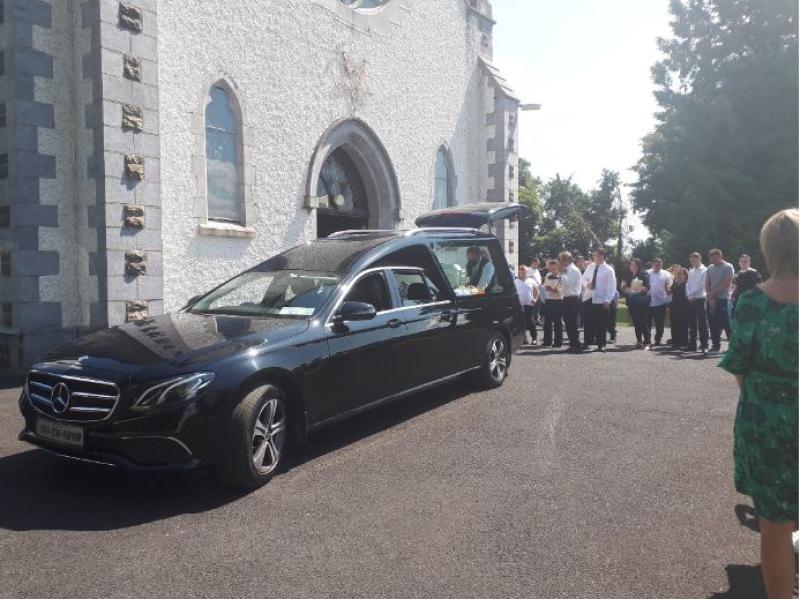 The father of a young mother of two who drowned while desperately trying to save her own son in a Co Cavan lake last week has said his daughter will be forever remembered as “my hero and my angel”.

Heartbroken Kevin Mooney was speaking at the funeral mass of 29-year-old Natasha Core at the Church of the Holy Family in Loch Gowna this afternoon.

Mr Mooney told mourners of how Natasha dedication and love for her two sons would be permanently etched in the hearts and minds of those closest to her.

“She was a loving mum and she made her family proud, especially her own family,” he said. “When you were down she put a smile on your face and she made you happy. She’s a hero to Tyler and Leighton and she is an angel.

“She is my hero and she is my angel.”

The young woman’s body was recovered from a lake last Wednesday evening less than a half a mile from where her funeral mass was held this afternoon.

A guard of honour featuring many of Natasha’s friends and neighbours as well pupils from St Patrick’s National School in Loch Gowna lined the roadway entering the church grounds.

A white coffin embellished with floral decorations was carried to the altar by members of Natasha’s family as dozens of mourners looked on in quiet reflection outside.

Symbols of the much loved and well respected young mother were brought to the altar in remembrance of a life Fr Michael Bannon said was abound in “warmth and affection”.

Her eldest son, Tyler, who Natasha managed to rescue from the shores of Loch Gowna just four days previously, brought a picture of his mother while her youngest son Leighton carried a phone.

“I don’t think either needs an explanation,” said Fr Bannon.

“She was either on the phone listening to music or talking to people very regularly.”

A candle and a paintbrush were also offered up as gifts, the latter being symptomatic of Natasha’s “house-proud” nature.

In paying testimony to the assistance provided by locals and members of various emergency service units in the search for Natasha last Wednesday, Fr Bannon said told of how the young mother’s legacy and commitment to her two sons would live on.

“It is the image of her walking with Tyler and Leighton, whether it was going to or coming back from school, whether it was bringing them for a walk or going shopping,” he said.

“They are the images of a loving mother always walking with her children and talking to them as they walked along. It’s an image of care, warmth and affection.”

Following the Mass and as Natasha’s coffin was carried out, mourners watched on as the opening bars of “the wind beneath my wings” echoed around the church.

The young mother of two was later laid to rest inside the grounds of the adjoining cemetery.