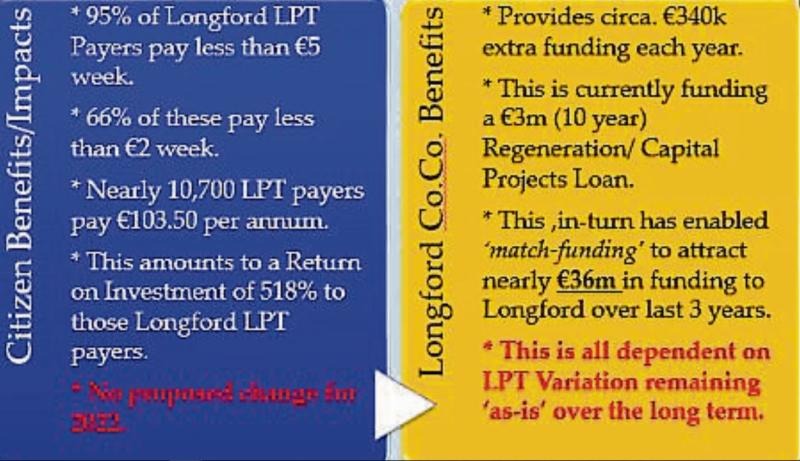 It means 95 per cent of households will pay less than €5 a week while two thirds face an average €2 weekly charge.

Local councillors signed off on the agreement at last week's meeting of Longford County Council meeting.

Despite congratulating her colleagues in Ballymahon and Granard who were “flying it” in bringing growth and development to their respective electoral areas, the focus of the council and its executive over the next 12 months needed to be on Longford town, she insisted.

“If your county town isn't right, it has a ripple effect,” she said.

“It's where people drive through, come to shop and if nothing is available in your county town, all boats will sink.”

According to latest figures, just over €2.2m is collected each year by Longford County Council with 20 per cent of that figure being assigned to an “equalisation fund” to bolster less prosperous councils.

Those measures have allowed the county to bolster its own reserves by varying LPT rates through its well documented 'Longford Model' in a move which has seen the local authority kickstart a number of large scale regeneration projects.

As part of the proposed reform of LPT, local authorities are set to be allowed to retain 100pc of all taxes raised within their own administrative areas from 2023. The Government is expected to make up any shortfall for smaller local authorities through central funding.

Independent Cllr Gerry Warnock said the decision to freeze LPT rates for 2022 was indicative of a broader need for “delivery and in particular delivery in Longford town.”