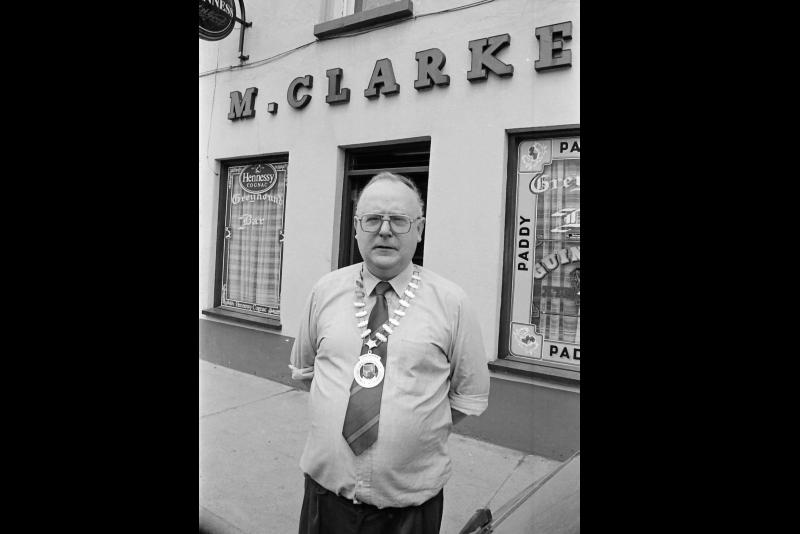 Longford bode an emotional farewell yesterday (Tuesday) to one of its most esteemed and revered characters in the form of former town councillor and publican Peter Clarke.

The popular compositor turned councillor and later businessman passed away peacefully in the the caring surrounds of Laurel Lodge Nursing Home last Saturday.

A compositor or typesetter with the Longford Leader and The Longford News, Peter's multi-faceted dexterity saw him enjoy long and distinguished spells both as a publican and local politician for almost four decades.

First elected in 1967 at just 24 years of age, Peter became Longford's youngest ever councillor, a mantle he proudly held for 27 years until the arrival of Fianna Fáil's Tony Flaherty in 1994.

The proud holder of Longford Town Mayor (1973-74, 1992-1993, 2001-2002) on three separate occasions, Peter was equally well known for his affability in being the mainstay behind Clarke's, one of the longest family run establishments still in existence in the county town.

This week, many of Peter's former political colleagues have been paying their own respects to one of Longford's most respected and admired personalities.

“He was a great man and someone who I had an awful lot of time for," said former town councillor Tony Carberry.

"He was elected before I was in 1979 and he had the experience. He was a very easy councillor to work with."

Mr Carberry said his long time political opposite number took those same unassuming virtues into many other facets of his life, most notably his successful running of his family run bar business on Dublin Street.

"Peter was a man who was the very same outside the bar as he was inside the bar.

"The minute you went in that door, you knew you were welcome.

"Peter would tell things as he saw it and he was admired for that. Politics would rarely ever come into it with Peter.

"He was a great friend of mine and is someone who I will miss dearly."

Those sincere sentiments were ones which were underlined by another of Peter's long serving town council colleagues, Christy Warnock.

The now retired Independent local representative who bowed out of local politics in 2011, said Longford had lost one of its most cherished and inimitable figures in the form of the former Fine Gael political heavyweight.

"I am very sorry to hear of Peter's passing," said a sombre sounding Mr Warnock.

"I have to say, he was a very personal friend of mine and was a very honourable, straight man.

"We served together for many years on the council and he was a first class councillor.

"Longford will be a lot poorer for his passing."

Fellow former town councillor Tony Flaherty told of how he managed to cut his own initial political teeth in the mid to late 90s on the back of Peter's vast political experience.

“He was a true gent, who always had Longford at heart,” said Mr Flaherty.

“I learned a lot from him on the VEC (Vocational Educational Committee) and served alongside him for 10 years.

“He never brought politics into it. Peter was a good councillor, he served the people well and if there was something which was good for the town, he was all for it. That was Peter.”