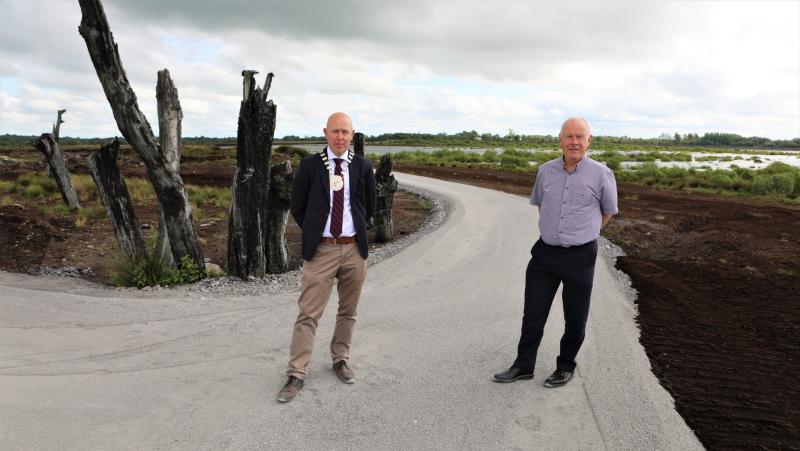 Longford County Council is delighted to welcome the allocation of €1.46 million for the further development of the Corlea Bog Amenity Walk and additional bog greenway extensions, linking them with a gem of Ireland’s Hidden Heartlands, the Royal Canal Greenway.

The funding, announced by Minister for Transport Eamon Ryan TD, is provided under the Strategy for the Future Development of National and Regional Greenways as set out by the Department of Transport, Tourism and Sport in 2018 which is supported in the Project Ireland 2040 plan. It’s part of the Department of Transport’s Greenway Programme worth €63.5 million, the highest single year amount ever allocated to this type of infrastructure.

These new routes, to be completed by 2022, will give local people and visitors extra options for active travel through the scenic areas of Longford. The project will see the recently completed Corlea Bog Amenity Walks linked up with the Royal Canal Greenway, as well as Longford Town and the villages of Clondra, Lanesboro and Ballymahon. These sustainable transport routes will provide a major tourism and public amenity, offering a breath-takingly beautiful escape to a natural environment in Ireland’s Hidden Heartlands.

Cathaoirleach of Longford County Council Paul Ross described the development as exciting. “This is an exciting time for tourism in Longford, with local entrepreneurs already seeing the benefits of the increased footfall off the Greenways. The development of assets like these also enhances the quality of life and health of our local people, encouraging us all to get active.”

The first phase of the existing Corlea Bog Walk, that complements the Corlea Trackway Visitor Centre experience, was completed in 2017 after €100,000 was received under the 2016 Rural Economic Development Zone (REDZ) Scheme. Then, as part of the wider Mid Shannon Wilderness Park project, €200,000 was confirmed under the 2018 Outdoor Recreation Infrastructure Scheme (ORIS). Both allocations were funded by the Department of Rural and Community Development. The ORIS funding saw the development of the Derryogue bog walk between Clondra and Killashee commence. Work on this project is expected to be completed in the coming months, with the benefit of the new funding.

This latest funding announced by Minister Ryan, seeks to complete the Corlea Bog Walk Phase 2, and extend it through Derrylough/Derrycolum and Ederra Bog Walk to open up access to a number of cut away peat bogs that are being rehabilitated at present, work that is already underway as part of the Mid Shannon Wilderness Park.

Chief Executive Paddy Mahon welcomed the funding, “Not only is this walkway a beautiful addition to Longford’s tourist offering, the entire project is further evidence of Longford County Council’s commitment to supporting the community most impacted by the power station closure as well as looking after our environment and tackling climate change.”

The Mid Shannon Wilderness Park is a project being developed by Longford County Council as part of an ongoing effort to return cut away bog land to a more natural state. It combines existing natural amenity areas, including Lough Ree, the rivers Shannon, Inny and Camlin, the Royal Canal, Newcastle Wood and other forests, with the future rehabilitated Bord na Móna bogs. All of these amenity areas, which are in very close proximity to each other, together, combine to create the Wilderness Park across south county Longford.