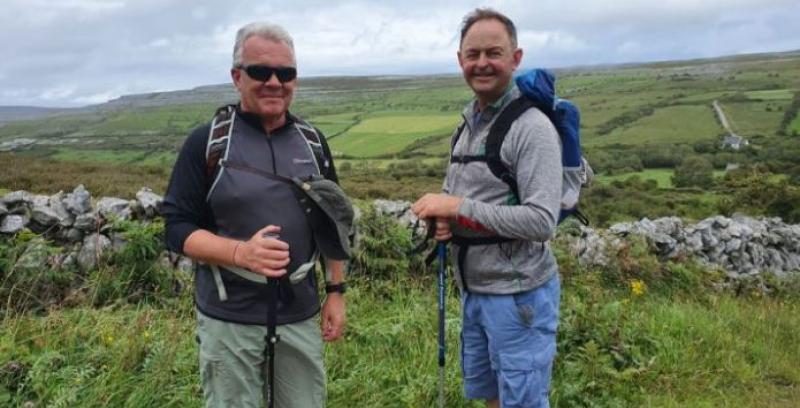 It can be difficult when you have someone who is suffering with their mental health. Vita House in Roscommon aims to provide counselling and therapy to the families of those who are having difficulty, to ensure that everyone is receiving the support they need.

One family that can sing the praises of the worthy charity is the Magan family in Killashee, who have been able to avail of therapy and counselling from Vita House for the last five years that their son has suffered with mental health issues.

“They’ve been helpful to our family because my son Daniel has been suffering with mental health issues and has done for the last five years. He has been into St Loman’s for some time and has needed help.

Now the family is hoping to give back with Dan and his friend Micheál Duggan embarking on a Malin to Mizen Head walk this Saturday.

“We were considering doing the Cian’s Kennels cycle, inspired by the Considine family,” Dan explained, referring to a cycle that was due to take place last year but was postponed due to Covid-19.

“We wouldn’t be up for the cycle, so we decided we’d walk it. And initially we were going to finish on the same day as they were finishing, but because of Covid the cycle got postponed. It’s going ahead in October but we decided we’d go ahead and do our walk in June.

“We’re heading off on the 25th of June. We’ll start walking on the 26th. We’ll walk about 37 kilometres each day for 16 days and it’s just less than 600km from Malin to Mizen the way we’re going.”

The pair will start from Malin head, through Derry, through Enniskillen, into Cloone, down through Drumlish, to Killashee.

From Killashee, Dan and Micheál will continue their walk along the Royal Canal Greenway to Ballymahon.

“Probably the safest part of the walk is from Killashee to Ballymahon because it’s on the canal,” he remarked.

“Then we’ll go on down towards Athlone and Nenagh and on down through Charleville, Bantry and Mizen Head.”

The two men have been friends since they went to school in St Mel’s College together. They’ve done several walks to train for their big undertaking, but none, Dan admits, that would compare to 37km per day, 16 days in a row.

“Hopefully our stubbornness will carry us through,” he laughed.

“It’s a nice way to see the country too. It would be lovely if there was a Greenway from north to south, but there isn’t so we’ll make the best with what we have.”

The funds raised will go to Vita House, with a donation also going towards Cian’s Kennels, which is the legacy of Killashee teen, the late Cian Neary.

Anyone wishing to donate can do so by visiting the GoFundMe campaign, Hike to Hope Malin to Mizen 2021, at the following link: https://gofund.me/84c03c35