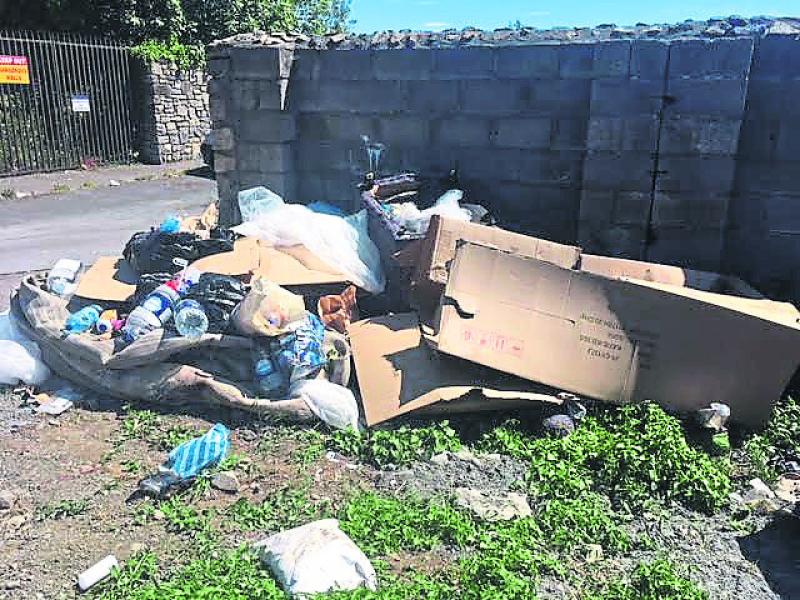 Local councillors are eager to tackle the issue of dumping in county Longford with proposals to introduce a domestic waste disposal scheme for council tenants.

Both Cllrs Gerry Warnock and Martin Monaghan had motions on the agenda of the May meeting of Longford County Council.
Cllr Warnock requested that Longford County Council write to the Minister for Housing, Local Government & Heritage to consider making provision, through an amendment of Section 31 of the Housing (Miscellaneous Provisions) Act 2009, empowering local authorities to incorporate charges pertaining to domestic waste disposal onto the rents of Local Authority

Tenants on the proviso that a suitable scheme is adopted by resolution of the members of the Local Authority.
Meanwhile, Cllr Monaghan called on the council to investigate the option of providing bins at a reduced rate compared to current market prices to all new and existing tenants.

“As the biggest landlord in the county, I would hope it would be possible to secure a competitive rate from a service provider. This rate could then be incorporated into the rental payment,” he said.

Cllr Warnock told his council colleagues that the subject of providing a domestic waste disposal service is not new to the council agenda and had, in fact, been “bobbing around for the last number of years”.

“The problem is, legally we cannot do that because of existing legislation. I do acknowledge that other members have raised this on a number of occasions,” he said, acknowledging also Cllr Monaghan’s motion.

“To me, it makes sense. We’re dealing with and talking about dumping every month and waste disposal issues and this, that and the other, and it would make perfect sense if local authorities were able to adopt the scheme and procure it at a knocked down rate.

“What I’m proposing is that, really and truly, we have to be hard on this. This is, in my view, common sense. It needs to be amended at a national level. Local authorities need to be able to make these decisions locally to suit their needs and that’s it, end of story.”

Cllr Monaghan agreed that it was a “no-brainer” to provide a waste disposal service to tenants, agreeing that the council should write to the Minister to get the legislation changed.

“This is a simple business plan. We can offer it to our tenants at a reduced rate because the market will be demanding this when we go to them with x amount of tenants,” he said.

“The technology is there now to allow these companies to go into areas, define which bins are theirs. I would back Gerry 100% because it’s the same notice of motion that I’ve gone along with and I just think with the amount of dumping and rubbish that has appeared in the last 12 months, it’s just getting out of hand and I believe if a tenant is paying for it, they’ll use their bins. And if it's part of their rent, they’ll definitely use their bins.”

Cathaoirleach of Longford County Council Paul Ross agreed that all elected members are aware of “the scourge of dumping” which he said is getting “worse and worse”, while Cllr PJ Reilly stressed that there are a lot of private landlords in Longford to and that it was important to note that it’s not just council tenants doing the dumping.

“There are so many people renting off private landlords now. We cannot tar our tenants as being the litter dumpers,” he said.

“So I know this is a good start off but we have to also note that there is the amount of people that’s not connected to the council at all, that’s in private accommodation and the issue can be there as well.”

The Environmental SPC from 2004 discussed the issue at length, according to Cllr Seamus Butler, who added that there was a precedent set in a court case called the ‘Mr Bin’ case.

“Local Authorities can’t incorporate waste disposal. However, there has been new legislation in the last 12 months that officials from the council can demand to know what the tenant or the owner of a dwelling is doing with their domestic waste,” he said, adding that the Covid-19 pandemic has put a stop to that but when it returns, “our housing liaison officer could put together a plan to tackle that”.

“I think getting the legislation changed in the short term isn’t going to happen, unfortunately. But we do now have the powers under the law to demand evidence of disposal of domestic waste,” said Cllr Butler.

Cllr Warnock acknowledged the support of his colleagues and agreed with Cllr Reilly that council tenants should not be tarred as dumpers.

“But in respect of my motion, this is something that local authorities can deal with for their own tenants,” he said.

“There’s 2,000 properties on the books. That’s a significant part of the total amount of households in the county, so if Local Authorities were at least allowed to set those parameters for their own properties, I think it would be a huge start going forward.”

Director of Services John Brannigan explained that Longford County Council has continued to do inspections on problematic areas during Covid.

“We’ve taken a soft approach initially, giving people one or two opportunities. That said, we will write to the Minister in relation to attaching the cost of the refuse collection to the rent. We propose to do a pilot within an area of Longford town this year, where we provide a subsidised refuse collection service that people can avail of,” he said.