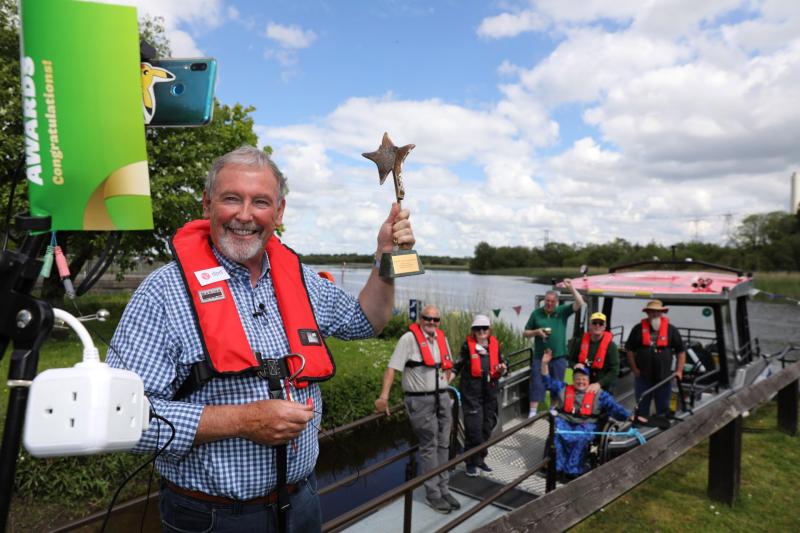 Lough Ree Lanesboro Angling Hub were winners of the Good Cause of the Year Award at the National Lottery Good Causes Awards. Alan Broderick (with trophy) and other club members celebrate

An inspiring not-for-profit organisation who are determined to promote inclusion within their community and provide equal access to fishing for people of all abilities has been named as the National Lottery Good Causes of the Year.

When Lough Ree Lanesboro Angling Hub realised how prohibiting fishing boats are for people with disabilities and special needs, they were inspired to bring about change and make the healthy activity accessible for all.

The group approached the Irish Wheelchair Association and a number of disability groups to draw up designs for a unique vessel, which has now become the first of its kind in Ireland and Britain.

The ‘Access-for-All’ boat has a bow that lowers like a ferry to allow up to eight wheelchair users roll on and off unaided. Since the debut voyage in August 2020, dozens of tourists and anglers with disabilities have been able to visit the lake every week.

Due to Covid, this year’s Good Causes Awards ceremony took place virtually with finalists tuning in from the comfort of their own homes. Grainne Seoige hosted the event live from the Round Room at the Mansion House in Dublin and was joined by an array of familiar faces to present each of the awards to the category winners.

The group were presented with their Health & Wellbeing Award from Professor Luke O’Neill while Lord Mayor of Dublin, Hazel Chu, had the honour of presenting Lough Ree Lanesboro Angling Hub with the overall Good Cause of the Year Award.

Andrew Algeo, Chief Executive of the National Lottery said: “I would like to congratulate all of the team at Lough Ree Lanesboro Angling Hub as well as our other six category winners who have all had a tremendous impact within each of their communities. The past year has been a challenge for towns and villages all over Ireland and these groups have gone above and beyond for those around them. It is such an inspiration to see the amazing work being done in every corner of the country by such a variety of groups who benefit from Good Causes funding.”

The six category winners received €10,000 each, whilst the overall Good Cause of the Year, Lough Ree Lanesboro Angling Hub, received an additional €25,000.