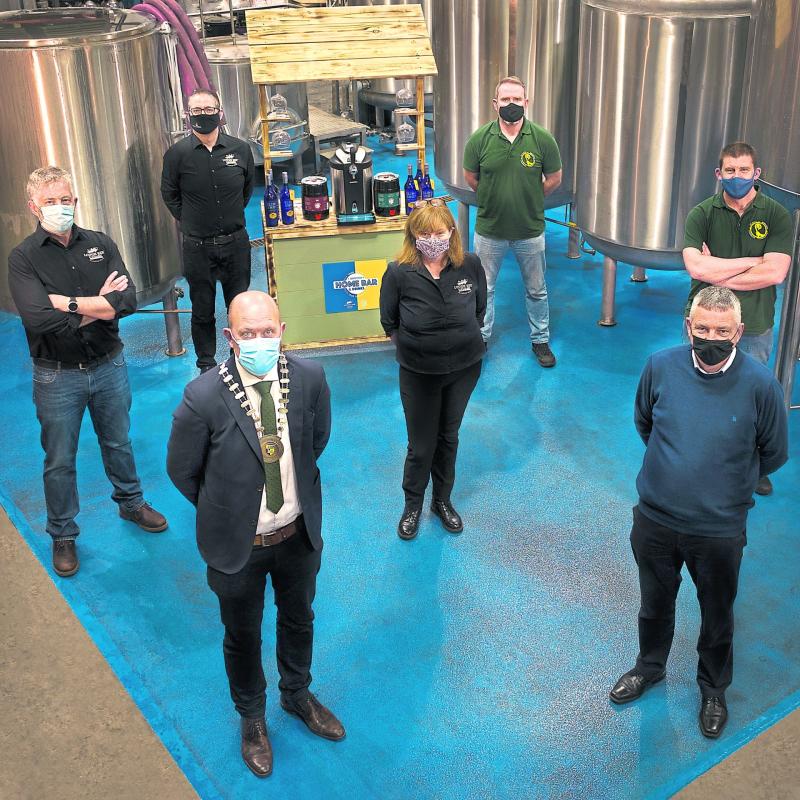 He continued, “We had worked very hard over several years to have our beers on tap in pubs and restaurants all around the region, and then all of a sudden, on March 12 last year, the on-trade side of our business fell off a cliff. We had a strong start to 2020 up until then, and had just finished shipping orders as pubs geared up for the busy St Patrick’s day and Easter periods. The uncertainty was probably the worst part. I don’t think anyone could have foreseen that almost 15 months later, many of those same pubs are still closed. But I think as the summer of 2020 wore on, we all realised that Covid was a longer term issue, and it was a case of looking hard at our business and seeing what direction we could take it in.”

Peter Clancy, CEO and Co-Founder of Lough Ree Distillery in Lanesboro, concurred. “We were the same, most of our business was in the on-trade so orders just stopped. On top of that we had just secured some duty-free listings for Sling Shot Distilled Irish Gin and Zesty Citrus Vodka, and then the travel industry ground to a halt. It seemed like a whole year’s work had been in vain. We were very fortunate in that we pivoted very quickly into making hand sanitiser and that kept us very busy through the early months of Covid. We followed that with launching a hands free sanitiser dispenser, CosSan, manufactured for us by Cooney Precision in Ballymahon, and we have nationwide distribution deals in place for those with our Sanitiser. Out of nothing practically we created a whole other business unit which is amazing really in hindsight.”

As the months dragged on it became obvious that the rapid growth of on-line shopping wasn’t just limited to traditional retail.

“Pre–covid, online wasn’t really a recognised channel to market for beer companies,” said Liam Hanlon. “However, having a bit of time on our hands gave us some headspace to address three areas in the business that we’d been planning for a long time but were too busy to implement.

“Firstly we embarked on a brand refresh process as we had outgrown our initial branding. As well as creating a branding platform for new ranges of beers, a key part of the brand refresh was building a whole new website, which had an e-commerce element built in.

“In the early part of Covid, we had signed up with some of the online platforms created by other craft brewers – and we could see how much traction they were gaining. People couldn’t go out, so instead they ordered beer delivered to their doorstep. That proved the concept, and gave us the confidence to develop our own on-line store.

“The final element was obtaining a special Producers Retail Licence, which allowed us to open our own Brewery Shop. Locals can now pop in and buy products directly from us, and it’s been a roaring success.”

Lough Ree Distillery’s experience was similar. Michael Clancy, Chief Technology Officer explained, “We had just opened Sling Shot Gin School at Churchtown Stores in Dublin, which we had to close temporarily due to Covid. But we saw a rise in demand for home based fun activities. We figured that if people couldn’t come to our Gin School, we’d bring it to them, and created our Sling Shot Gin School at Home kit. It’s absolutely unique in the market and has been a tremendous success for us.

“We’ve shipped them to customers in Italy, Germany, Belgium, France, UK and all over Ireland, and expect to have them listed on Amazon shortly as well. Just recently we’ve started to get traction with some of the big corporate Tech companies in Dublin who use it for team building events. We’re updating the packaging and branding aspects currently in anticipation of increased sales in the corporate and export space as the year goes on.

“The success of the Gin School at Home kits opened our eyes to the potential online, and at the back end of last summer we upgraded our online store, made our full product portfolio available there and then had to learn quickly the nitty gritty of order fulfilment and packaging for online delivery. It’s worked well and about 60 % of our sales in the run in to last Christmas were online, and we’ve been pleasantly surprised by how that’s continued since the start of this year,” said Sheila Mullen, the Chief Financial Officer of Lough Ree Distillery, and the third member of the sibling trio.

“Our latest Whiskey release , the St Mel’s No.1 Cask release under The Bridge Series shows the potential here. Most of that release, about 250 bottles, was available for online sale only, and it’s almost sold out at this stage after just a week.”

That leads neatly to the recent collaboration between the companies. As the two product people – Liam Hanlon and Mike Clancy explained.

“We’ve know the lads for years obviously,” said Mike, “and we’re always bouncing ideas off each other. We had bought some casks to finish our Whiskies in and we gave one of them, which had previously contained a Rioja Red Wine, to Liam.

“It’s something I’ve always wanted to try,” said Liam. “But having a distillery close-by made it easy to do. We filled the cask with Brown Ale and left it for 10 months, during which time the beer picked up some fantastic red wine notes. When we emptied it, we sent the cask back out to Lanesboro for the lads to fill with Whiskey, and we went ahead and released a cask aged brown ale which flew out the door literally.

“We took that cask and filled it with some nice 6 year old malt whiskey, and then watched it carefully over several weeks to see the influence the brown ale was having on the Malt Whiskey. After 15 weeks we emptied the cask and bottled it, creating the St Mel’s No. 1 release under The Bridge Series. The success of the collaboration both in terms of the distinctiveness and quality of the products we produced, and how they were received commercially means it’s something we’re going to collaborate on regularly, so watch this space for future releases from both companies,” added Mike.

It was as part of regular conversations that the idea for a joint competition came about. Eoin elaborated, “There’s a lot of similarities between our two businesses – we’re both in the drinks business, and we’re both really passionate about making top quality products, right here in Co Longford. All five of us are proud Longford folks. And when we looked at the challenges that both companies have faced since Covid started, we both had to adapt and innovate quickly to stay alive. Being a small business allows you to do that, but at the end of the day, it wouldn’t have worked for either company without our customers supporting us by buying our products, either through traditional means or online, and we’re really grateful for that support.”

Peter added, “Having come through the last 15 months, we all realise how lucky we are. Our businesses are certainly different than they were pre Covid, and hopefully much stronger for it. However, we also know that many others have faced greater challenges, of a business and personal nature throughout this period. And so we hit on the idea of having a competition with a great prize worth well over €1,000, just as our way of jointly saying ‘thank you’ to our customers for their support.”

Both companies acknowledged the support and encouragement they have received from LEO Longford over the years.

Commenting on the collaboration, Michael Nevin, Longford LEO said that it was encouraging to see local business connections leading to new opportunities. “Our job at Leo Longford is to create the environment for companies like St Mel’s and Lough Ree Distillery to set up operation in Co Longford, and to support them whatever way we can. But we have a minor role really – these are the entrepreneurs at the coalface who put in the blood , sweat and tears to make it happen.”

Launching the competition in a socially distanced St Mel’s Brewery last Friday, Paul Ross, Cathaoirleach of Longford County Council was brimming with enthusiasm – “It’s fantastic to see. I know both companies well and they are great operators, who are really proud of being based in Longford. It’s great to see them doing well individually, but also collaborating together on various fronts. And this competition is a brilliant idea and I wish both St. Mel’s and Lough Ree Distillery every success with it. Some lucky winner is going to be very popular with their neighbours this summer.”

The competition runs until midnight on Friday, June 26, with a fantastic prize of a Home Bar, complete with a beer dispenser, a mini keg of your choice of St Mel’s beer, six bottles of Gin or Vodka from Lough Ree Distillery , and some glasses.

Any online purchase from both companies right up until the closing date will be automatically entered into the competition, and entry is also free online at www.lrd.ie.