Preliminary investigations show speeding 'not a factor' in fatal accident 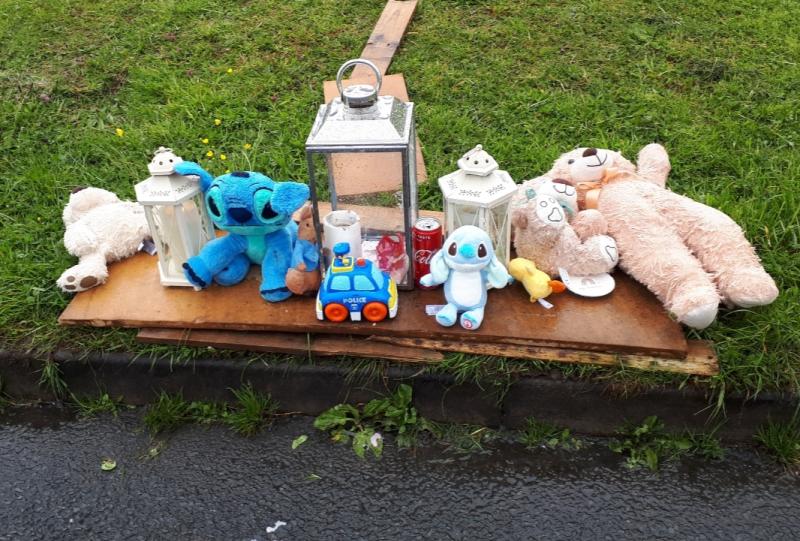 A four year old boy who was tragically knocked down and killed by a van in a Co Longford housing estate yesterday has been remembered as a “lovely little gusun” who had a “heart of gold”.

The toddler, who has been named locally as Charlie McDonagh, died after being struck shortly after 2pm in the Palace Crescent area of Ardnacassa.

It’s understood the young boy was fatally injured by a delivery van driver who had been in the area at the time.

He is believed to live locally and is said to be “shaken up” by the events of yesterday afternoon.

Relatives of the young boy’s parents are being cared for by close family and relatives.

Emergency services attended the scene within minutes but were unable to save the toddler.

A forensic examination took place yesterday afternoon with the scene being cordoned off for a number of hours.

A shrine displaying a collection of teddy bears and a police car have been erected at the scene in memory of the late toddler.

A postmortem is due to take place later today at Mullingar’s Midlands Regional Hospital as gardaí look to establish the circumstances behind yesterday’s tragic incident.

Senior sources have for the moment, the Leader understands, ruled out speeding as being a primary cause however.

This afternoon, locals who live on the estate, told of how the tragedy had left the local community in a state of shock.

John Keenan, who has been a next door neighbour to the family for the past three and a half years, said he and many others living nearby were struggling to come to terms with the news.

“Charlie was a lovely little gassún,” he said.

“He had a heart of gold. Me and him were good friends and he was always out playing.”

Mr Keenan did, nonetheless, hit out at how the location in which the tragedy unfolded had been left without any traffic calming measures compared to other areas of the estate.

“We have been asking for ramps in here for ages,” he said.

“That’s what we need and for speeding to be stopped.”

Another local resident, Amos Ngwenya agreed as he called on local authority chiefs to step in.

“It is very sad. I think we have to get some ramps on this road to slow the traffic,” he said. “There are a lot of things that need to be organised.”

A few yards across from a green area where the young boy was fatally injured, mother of three Favour Ede, spoke of how locals had been left devastated by the tragedy.

“I was inside,” she said, when recalling the incident.

“I am so, so sad today. My husband and my family are in shock.”

Local Cllr Gerry Warnock likewise expressed his condolences to the family of the young boy as he too reiterated calls for ramps to be made mandatory within all housing estates nationwide.

“This is a national decision which has to be made,” he said.

“In the interests of public safety they need to be brought in within all newly built and existing estates. Signage is only as good as its enforcement and, in my view, the physical barrier is the only barrier.”