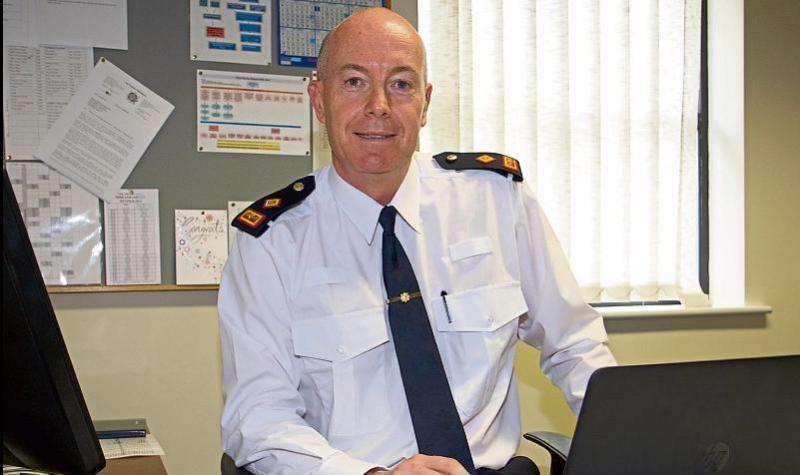 Supt Delaney has served in the Longford District for almost five years as superintendent following a lengthy and successful career with An Garda Síochána.

State Solicitor Mark Connellan this morning revealed that today was Supt Delaney's last official day in court, announcing that the Garda chief will retire in June.

"I just want to express my thanks to Supt Delaney for his service in Longford. He has been extremely diligent, competent and conscientious during his time here," said Mr Connellan.

That tribute triggered a series of well wishes from those within the courtroom with local solicitor John Quinn endorsing those comments on behalf of the solicitors present.

"I'd like to wish Supt Delaney the very best. I'd like to endorse fully what Mr Connellan has said. Supt Delaney has always operated with the utmost cooperation. He has been very cooperative and easy to deal with," said Mr Quinn.

On behalf of An Garda Síochána and in particular those members who have worked under Supt Delaney, Inspector Frank Finn commended the professionalism with which Supt Delaney conducted himself.

"Supt Delaney came to Longford in August 2016 and he has been in the district almost five years but he was very familiar with the area as a Detective Sergeant of the divisional drugs unit prior to that," he said.

"He always sought ways to include the community wherever he could," he added, noting the cooperation between An Garda Síochána and a number of local groups throughout Supt Delaney's time in Longford.

"Personally, I'd like to thank him for his service," said Inspector Finn.

Court Registrar Maggie Curley, on behalf of all the court staff said that Supt Delaney was of great service to the court over the last five years.

"On behalf of the court staff I wish you the very best. Thank you for all your help," she told Supt Delaney.

Judge Seamus Hughes also wished the retiring Garda chief the very best with his retirement, paying special tribute to the support that An Garda Síochána has offered the court under Supt Delaney's watch.

"I didn't actually know he was retiring until today. I thought he'd be here many years after I retired," Judge Hughes quipped.

"I don't know what he's doing next but whatever he does, I wish him well.

"I'd like to thank you personally for your support," Judge Hughes continued.

"Our interactions would not be very frequent but he has always sent the very best of men to represent him in court.

"I'd also like to thank him for his support and assistance at the door outside," he added, noting the importance of a strong Garda presence both before and during the Covid-19 pandemic.

"We wouldn't be able to manage without his help in providing extra support during what has been a very difficult time with Covid-19," said Judge Hughes.

"The court could not have functioned without the help of Supt Delaney and An Garda Síochána.

"I'm aware from the local newspaper that he is regarded with the utmost respect in the community.

"He's been kept on his toes these last five years. He has ensured that An Garda Síochána have carried out their duties. They have gained the confidence of the people of Longford, which can only be done if the people at the top are conscientious and professional.

"Supt Delaney is held in great regard by all in Longford. Nobody likes to see a person retire, especially a young person. I wish you every health and happiness," he concluded.

Responding to those touching tributes this morning, Supt Delaney expressed his sincere thanks to all who had wished him well.

"I'm actually the one who should be thanking all of you for your help. I came here in 2016 and it was a bit like a homecoming for me," he said.

He added that "from the very outset" he had made it "quite clear" that he wanted to work closely with all agencies, such as the Joint Policing Committee and other community groups noting the success of those cooperations over the years.

"I've had five very challenging but productive years and it wouldn't have been possible without them," he said.

Speaking to Judge Hughes directly, Supt Delaney said, "I'd like to thank you personally for the support you have given. At times when the thin blue line was threatened and lives were threatened, you stood up and took account.

"Policing is an infinite cause. You don't own the position, you rent it. I'm only a tenant in this position for the last five years. I believe the very least you can do is leave it as well as you found it and I hope that I have done that," he concluded.