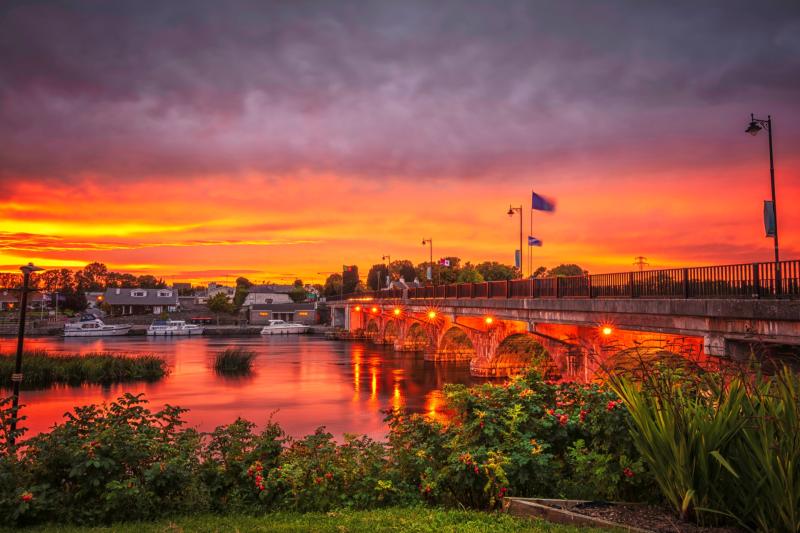 This beautiful sunset photo of Lanesboro was captured by Brigid Mullooly

Members of Longford County Council have expressed concern that Roscommon County Council has gone ahead with a feasibility study for a boardwalk without the inclusion of Lanesboro representation.

At last week’s meeting of Longford County Council, Cllr Mark Casey requested that the council give an update on the correspondence with Roscommon County Council in relation to the tendering of the proposed feasibility study for a boardwalk around the inner lake of Lough Ree in Lanesboro and Ballyleague.

“We need to keep on pushing this. This is a thing that’s really needed out in Lanesboro to increase our tourism capacities and increase our footfall for tourism,” said Cllr Casey.

“The ESB has left Lanesboro now and they’re not seen too much around the place. I’m afraid that everything is going to leave the town and there’s going to be nothing left.

“So we need something there that’s going to be a lasting tourism project. This is what the people of the town team and the people have identified and I just want to make sure that we keep on pursuing it as much as we can.”

Head of Finance with Longford County Council, John McKeon, informed councillors that Roscommon County Council had received funding for their feasibility study via phase one of the Just Transition Funding in September 2020.

“They went off and consultants did the feasibility study for the boardwalk in Ballyleague which was under their control and we can’t control them on that, so that’s what happened there,” he explained.

“We have received, in collaboration with Roscommon, funding for the Economic Enterprise Development Strategy for Lanesboro and Ballyleague. This is now very near completion and that will allow for a number of strategic objectives for the future development of the area and with that, we’ll follow on with our view on it,” he added.

Cllr Casey again emphasised the importance of this project for the local community and for Longford as a “premiere tourism destination”.

“This would be a fantastic thing. It’s ticking all the boxes. It’s joining Longford and Roscommon. It’s two counties collaborating together, although it looks like Roscommon isn’t going to collaborate,” he said.

“The feasibility study for half a boardwalk doesn’t seem practical. The boardwalk is going nowhere. It’s going to a dead end. It’s a cul-de-sac boardwalk. It just seems a bit ridiculous what Roscommon County Council are planning and it looks like they’re not interested in this project and I’d be very afraid of that because we have a very good team of people out in Lanesboro that are trying to drive this forward and drive the town forward.

Cllr Casey was backed by Cllr Colm Murray who highlighted the importance of collaboration between the two counties.

“It is worrying that Roscommon County Council are going off and acting unilaterally with regards to this development,” he said.

“We set up a collaboration group down there to help two local representatives and the people in Lanesboro and the other side of Ballyleague to come up with a shared vision of what could be done in that Lanesboro/Ballyleague area and to have one local authority acting unilaterally is not satisfactory.

“Maybe we can put something on the agenda for the Ballymahon Municipal District meeting where we can get a further update as to any discussion that may take place with Roscommon in the meantime.

“And I think some conversation needs to take place to see what’s going on, to see if we’re still going into the collaboration group for Lanesboro and Ballyleague or should we be fighting fire with fire. I don’t want to fight fire with fire. Joined up thinking is all that will help areas progress and lessen the blow that the likes of the ESB loss will have to that area.”

The issue will remain on the agenda.

Threats against MEP Luke Ming Flanagan and his daughter resolved

Longford Senator Micheál Carrigy: 'Social media companies need to take on more responsibility to ensure that their platforms are safe spaces for our teenagers'