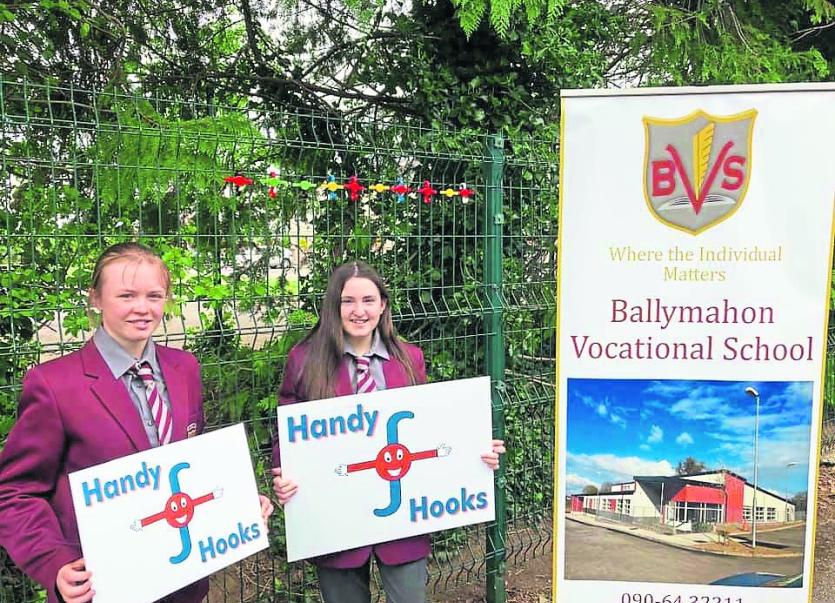 Ballymahon Vocational School students Chloe Hopkins and Amy Kelly, under the guidance of their enterprise teacher Ms Ann Hall, came up with the innovative ‘Handy Hooks’ concept. It triumphed at the Longford Student Enterprise Awards county final, organised by Longford LEO, and they were absolutely thrilled with their success at the national final which took place ‘virtually’ at Croke Park.

Owing to Covid-19 restrictions, just one of the victorious duo was able to appear on the Late Late Show with presenter Ryan Tubridy and that honour went to Chloe Hopkins.

‘Handy Hooks’ is a customised hook that can hold a wide range of items from gear bags, hoodies, drink bottles, coats etc and can be used at sporting grounds and parks. A very versatile and portable product, it's particularly useful when dressing rooms are out of bounds.

Longford was also represented at the National Student Enterprise Finals by Ardscoil Phadraig, Granard’s Cian Brady and Ryan Spollen from ‘R&C Controller Stands’ in the Junior category. Representing Longford in the Senior Category were Ella Duggan, Megan Glennon, Anna Flynn and Aoife Cullen from Meán Scoil Mhuire with ‘Picture It’.

Cian O’Hara from Cnoc Mhuire, Granard also represented Longford with ‘Save Your Breath’ in the “Most Creative Business Idea” section.

Praising the winning students and all those representing Longford at the National Finals, Michael Nevin, Head of Local Enterprise Office Longford said: “This is a proud day for student enterprise in Longford. We would like to congratulate the students, their families and their teacher at Ballymahon Vocational School on winning a national award in Croke Park. We would also like to pay tribute to all the other finalists and participants from Longford who are impressive ambassadors for student enterprise in the county.”