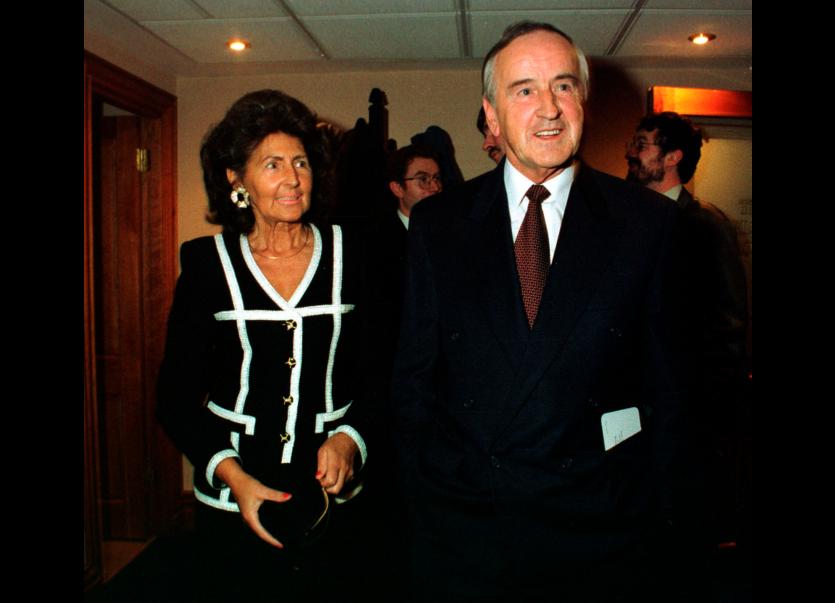 Kathleen Reynolds, wife of the late Taoiseach Albert Reynolds, was quite simply one of a kind.

A devoted wife, loving and committed mother, she oozed gentility throughout her 88 gloriously fulfilled years.

The mother of seven was remembered this week as someone who held a deep and resolute faith wherever she went.

“One thing you can say about Kathleen was she was loyal,” he said.

“When she took a saint on board, that was her personal saint.

“There was no other saint. I used to say to her would you not think of saying a wee prayer or a Novena of Hope. ‘No,’ she said,

‘I will stick to the one that works’.

“The secret power behind the plan of peace was Kathleen’s prayers and Kathleen’s dedication.

A proud descendant of Ballymoate, it was here the elegantly stylish Sligo native met her future husband during his spell as a CIE work.

At the time, the then Kathleen Coen, was plying her own trade in McGettrick’s Outfitters.

When goods arrived by train, her future husband delivered them to the shop and later invited Kathleen to go to a dance with him, by bicycle.

It was an invitation which would turn into an abiding union that would last a lifetime.

It didn’t come without a few interesting interludes at the outset of the pair’s romance, however.

Fr D’Arcy told of how showband legend Paddy Cole referred to a conversation the Monaghan musician had exchanged with a mourner ahead of this morning’s ceremony.

“He said as he came into Church that some man had spoken to him outside and said he took Kathleen for a dance one night but during the dance he got a tap on the shoulder from Albert who said: ‘You don’t have planning permission for that’.”

The pair would later go on to exchange nuptials at a modestly sized wedding at Westland Row Church, Dublin, in June 1962.

For the first few months of their newly married life, the couple co habited with Mr Reynolds’ mother in Rooskey before later going on to buy their own home, ‘Mount Carmel’ along Longford’s Dublin Road.

Within two years of their marriage, their first child, Miriam, was born with Kathleen opting to become a full time homemaker.

A full time house helper moved in with the family, but it failed to stop Kathleen aiding the children with their daily homework.

Though always seen both exquisitely dressed and with a dazzling smile on her face, Kathleen underwent personal health issues of her own, always courageously borne and away from the public eye.

In December 1991, she was diagnosed with cancer and like she had done all the way through her life, the power of prayer pulled Kathleen through.

“I silently prayed to St Rita of Cascia,” she said at the time.

“Over the years, I had asked her for little favours, like exam success for the children and the like. She never let us down.”

Readily viewed as the perennial mainstay behind her late husband’s rise to political stardom, memories have been relived this week of February 1992 when Mr Reynolds was elected Fianna Fáil leader.

In an extract taken from Tim Ryan’s book entitled ‘Albert Reynolds: The Longford Leader’, the would be Taoiseach reportedly told his wife on the morning of his election: “You’ll be proud of me before this day is out.”

Upon kissing Kathleen on the cheek, the insatiably proud mother of seven replied: “You know I’m very proud of you, love. We all are. Good luck and God bless, Albert.”

An agonising forty-six minutes later and just after 3:30pm, a newsflash filtered through, confirming the inevitable.

A huge cheer is said to have engulfed the Reynolds’ living room, prompting Kathleen to sigh: “Thank God, it’s finally over.

“If anything ever calls for a celebration, this does.”

It was a statement which illustrated just how steadfastly loyal she was to her husband’s political career.

Her influence on Mr Reynolds and in the home was unquantifiable.

“He likes to have my support, and he thinks it important,” she said in an interview with the Sunday Press.

“But I wondered at the start, how I was going to attend all those functions.”

Indeed it was how the then ‘first lady’ was likened to her US based counterparts by political correspondents of the day which undoubtedly best summed her up.

“The difference between Kathleen and the Barbaras and the Hilarys (of Bush and Clinton administrations) is that Kathleen is for real.

And that, perhaps, just perhaps is how she will be remembered-one of a kind.

The late Kathleen Reynolds is survived by her children Miriam, Philip, Emer, Leonie, Albert, Cathy and Andrea, her sister Sr Emmanuel , her brother Paddy, her daughters-in-law Anne and Erika, sons-in-law Kevin, Niall, Garret and Jamie, her adored grandchildren Phoebe and Heidi, Robert, Stephanie and Mark, Mia, Katie, Jack and Sarah, Charlie, Harry and Anna-Rose, sister-in-law, nieces, nephews, relatives, many friends and her wonderful carers, to whom sympathy is expressed.
May she rest in peace.