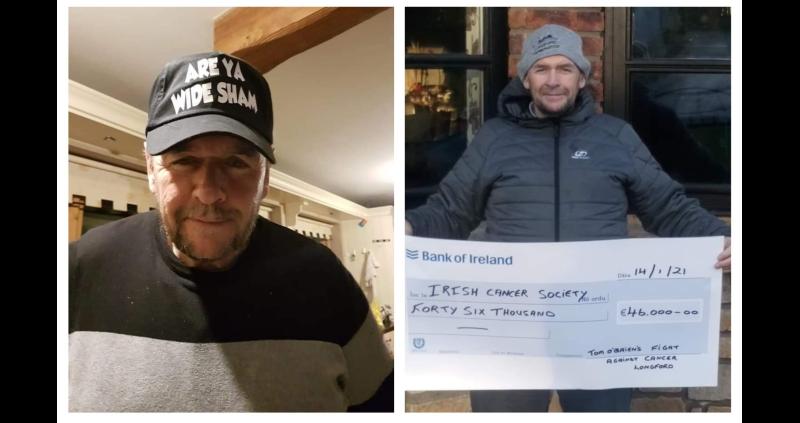 Townies will no doubt miss hearing his famous ‘Are ya wide Sham’ greeting, however, their memories of the late Tom O’Brien, one of Longford town’s favourite sons, will live with them forever.

A cloud of enormous sadness descended over the town Tom loved so well when news of his death, following a brave battle against cancer, broke yesterday, Thursday, May 6.

An immensely proud dyed-in-the wool townie, postman Tom was renowned for putting a smile on everyone's face and many people are heartbroken following his passing, but most especially his family, wife Kathleen, children Daire, Niamh and Diarmuid, sisters Ailish Smyth (Granard), Joanne (Carlow) and Christine; brothers Donal (Dublin), Padraic (Longford Leader) and Benny; and a vast circle of friends.

People fondly remember Tom working in his parents, the late Maura and Tommy O’Brien’s shop and he loved dealing with customers, regaling them with tall tales and jokes.

The O'Brien's shop was an institution on the Park Road / Teffia Park and it had been run by Chrissie Cotton, who was a sister of Granny O'Brien, before Maura and Tommy took it over in 1976.

Maura died peacefully on Sunday, January 12, 2020, while Tommy, who passed to his eternal reward in 1998, was a legendary GAA player and official and he was honoured as the Longford Association in Dublin Longford Person of the Year in 1993.

You always felt better after meeting Tom and he always had a smile even on the darkest of days.

Tom was a comedy legend, possessing a charismatic stage presence and he starred in numerous St Mel's Musical Society, Tops of the Town and Longford Variety Group productions, and he was also a past member of the Backstage Theatre Group.

St Mel’s Musical Society expressed sadness at the passing of one of its true stalwarts. Tom played the role of ‘Stewpot’ in their 1983 production of South Pacific and he also featured in ‘Calamity Jane’.

He starred as ‘Marcellus Washburn’ in ‘Music Man’ in ‘94 and twelve months later, Tom finally landed the male lead role, when he was excellently and memorably cast as ‘Gaylord Ravenal’ in ‘Show Boat’.

He was also super in the role of ‘Chief Sitting Bull’ in the 1996 St Mel’s Musical Society production of the comedy western ‘Annie Get Your Gun’.

Paying tribute, Longford Variety Group said Tom’s comedy skills were second to none. “He loved the stage and why wouldn't he, he was born for it!”

He was also accomplished at belting out a song or two, and his rendition of ‘Bad Bad Leroy Brown’ or ‘I Did It My Way’ were heard many a night at karaoke venues around town.

Indeed, earlier this year, in January, Tom and his close friend Éamon Ó Ceallaigh, enjoyed incredible chart success as their song ‘Whatcha gonna do when you leave School’, went to number one on the Irish iTunes charts.

With massive support from the people of Longford, ‘Whatcha gonna do when you leave School’ kept chart trailblazers like Dermot Kennedy, Ed Sheeran, Little Mix and Taylor Swift off top spot.

Tom loved that of course and at the time, in the midst of his own cancer fight, he thanked everyone 'from the bottom of his heart' for their amazing support.

Four decades ago, when Tom and Éamon were in their late teens, Éamon says he wrote a song, with Tom in mind. In late 2020, a suggestion was made that the song ‘Whatcha gonna do when you leave School’ should be recorded and it was the realisation of a dream when the song reached number one in the Irish iTunes charts and in the process raised precious funds for the Irish Cancer Society.

The young Tom also tried his hand at a bit of gaelic football and he was part of a St Michael’s panel that famously won the Longford Bord na Scol title in the 1970s, breaking the dominance of the then all-conquering Shannon Gaels.

The O’Brien name is synonymous with Longford Slashers GAA and Tom was a Slashers man his entire life, as a player, coach and supporter.

A tribute on the club’s Facebook page highlighted how Tom won Championship medals at under 14, 16, Minor & under 21 football as well as Minor hurling. “He coached underage boys and girls teams. He couldn’t have been any prouder of Daire, Niamh and Diarmuid when they pulled on the sky blue - they were always the best players on the pitch in his eyes!”

Tiernan Dolan, on his Humans of Longford Facebook page, said Tom O’Brien’s ‘legacy will live on through his amazing generosity, warm personality and being one of the genuine sound lads’.

He wrote, “Though only a young man, he was one of the real, genuine characters of Longford. Always with a smile and time for everyone, he was surely one of Longford's favourite sons. You always came away feeling better after meeting and chatting with the genial Tom.”

For almost two decades, Tom was a familiar figure pounding the pavements of Longford town and delivering the post in his own inimitable and memorable way.

He’d a complimentary word for all the ‘beures’ and greeted everyone he met with his trademark, cheerful smile.

The ‘lucky’ postman, who loved to joke about the number of post boxes he rattled, even featured on RTÉ’s Telly Bingo in 2018 when the ticket he purchased in Vaughan's Daybreak, Park Road, came up trumps in the National Lottery's 'Phone Risk' card number game.

A respected and great work colleague, he revelled in the banter that accompanied his ‘big TV break’.

Tom enjoyed social media fame in a hilarious TikTok video that went viral and unsurprisingly, there has been a huge outpouring of sympathy and a string of warm tributes paid to him across various social media platforms.

The genial Tom loved life and loved people, and he will always be remembered as ‘some Sham for one Sham’ and we express sympathy with his family at this extremely difficult time.

Ní bheidh a leithéid ann. May he rest in peace. 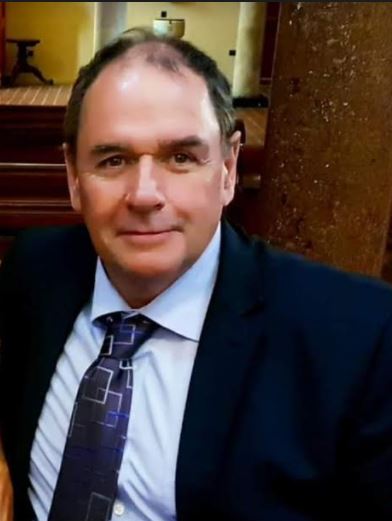 The death occurred, peacefully in the loving care of the nurses and staff of St.Vincent’s Private Hospital, Dublin, on Thursday, May 6 of Tom O'Brien, Cartrongeeragh, Longford Town, Longford. Predeceased by his parents Thomas and Maura and by his infant sister Derbhala and brother Colm. Tom will be sadly missed and remembered with love by his beloved wife Kathleen, his adored children Daire, Niamh and Diarmuid, sisters Ailish Smyth (Granard), Joanne (Carlow) and Christine, brothers Donal (Dublin), Padraic and Benny, father-in-law Tommy, mother-in-law Angela, sisters-in-law, brothers-in-law, nieces, nephews and a wide circle of friends. May he rest in peace.
Mass of the Resurrection on Sunday, May 9 at 1pm in St Mel’s Cathedral, Longford. Given the exceptional circumstances and in accordance with government guidelines, the Mass will be restricted to 25 people only. The Mass will be streamed live, please go to www.longfordparish.com
There will be an opportunity for the community to support the family by being present along the route (please adhere to social distancing and mask wearing protocols) as Tom’s funeral cortege leaves St Mel’s Cathedral, proceeding out the Dublin Road, through Teffia, passing Longford Slashers G.A.A grounds, past his residence and on to Ballymacormack Cemetery for interment.
Those of you who would have liked to attend but due to current restrictions are unable to, may leave their personal messages in the “condolences” section on RIP.ie. The family very much appreciates your support and consideration at this time. Family flowers only please, donations, if desired, to Longford Hospice c/o Glennon Funeral Directors or any family member. Please note Tom’s residence is strictly private.

Below - Page from the St Mel's Musical Society programme for their 1995 production of 'Show Boat' which starred the late Tom O'Brien in the lead role of ‘Gaylord Ravenal’. His brothers Padraic and Benny were also on stage for 'Show Boat' in the roles of Steve and Frank, respectively. 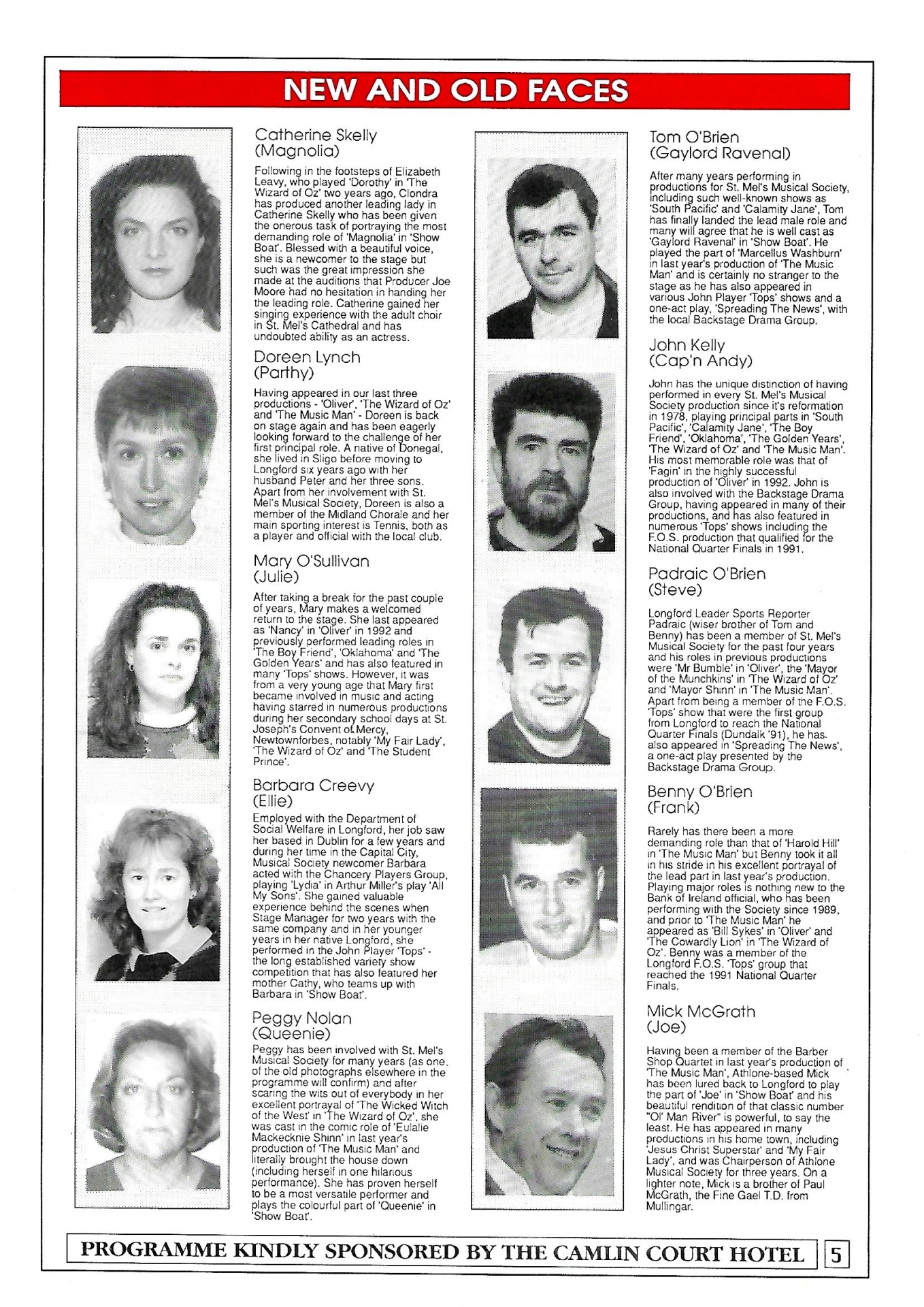 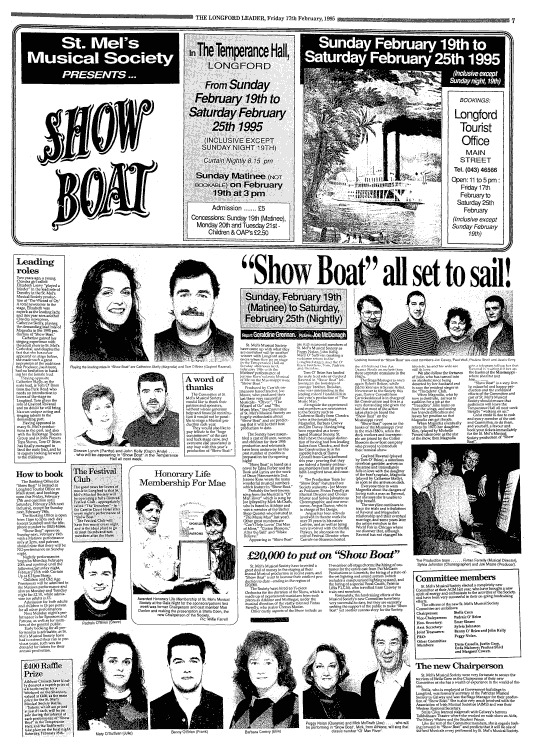