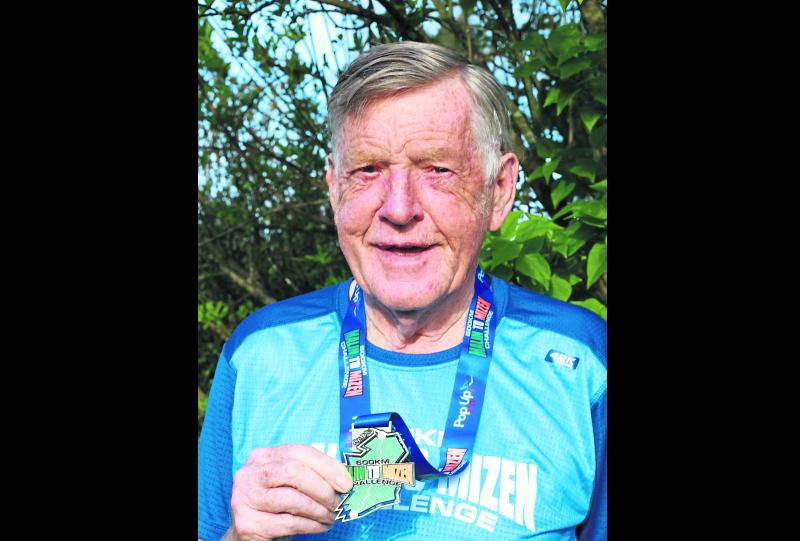 ‘Marathon Man’ Liam Fenelon with his Malin to Mizen medal

333 marathons not out: Liam Fenelon running 100 miles a week

It’s a mantle the affable 79-year-old is in no way keen to self proclaim however, as he focuses all of his efforts into raising much needed funds for St Christopher’s Services.

Part of that drive is borne out by a mix of lockdown fatigue tinged with an insatiable desire to underpin an organisation which remains very much close to his own heart.

“There hasn’t been any marathons for quite some time and I wanted to try and do something,” he said somewhat modestly.
Liam’s turn of phrase of “doing something” is not what most others would relate to or even consider taking on, however.

Rather, it has for the past four weeks involved completing 100 miles a week, firstly by taking on a gruelling 600km Malin to Mizen Head run and more recently an even more exhausting 100km Route 66 Virtual Challenge.

Both, given the current Level 5 restrictions, have seen Liam cover almost every footpath and section of road throughout the greater Longford town area.

And it’s started to strike a chord among the public, it would appear, with passing motorists already digging deep into their pockets to help Liam in his fundraising efforts.

“I have already got €100 passed over to me from the windows of cars and where people have stopped to ask what I am raising money for,” he remarked.

Liam is keeping his fingers crossed those who routinely would have supported both the Longford Marathon and Niall Mellon Township Trust initiative will redirect those contributions to his St Christopher’s fundraising endeavours over the coming weeks.

“Niall Mellon is not going ahead this year and there’s no doubt that St Christopher’s needs a push,” he stated, revealing that since its inception almost 20 years ago the Longford Marathon would have donated around €200,000 to St Christopher’s.

“The marathon didn’t go ahead last year and we still don’t know what is happening this year (with current public safety guidelines), so I am hoping people will do what they can to help,” he said.

Liam said his current fundraiser is not one designed to throw the spotlight on his shoulders, but instead uphold one of this county’s most treasured organisations.

“I don’t need publicity, I’ve got enough of it over the years. This is about supporting St Christopher’s and supporting a place that is dear to the hearts of so many Longford people.”

The link to ‘Liam Fenelon's Malin to Mizen for St Christopher's' gofundme page is: https://gofund.me/282c7104