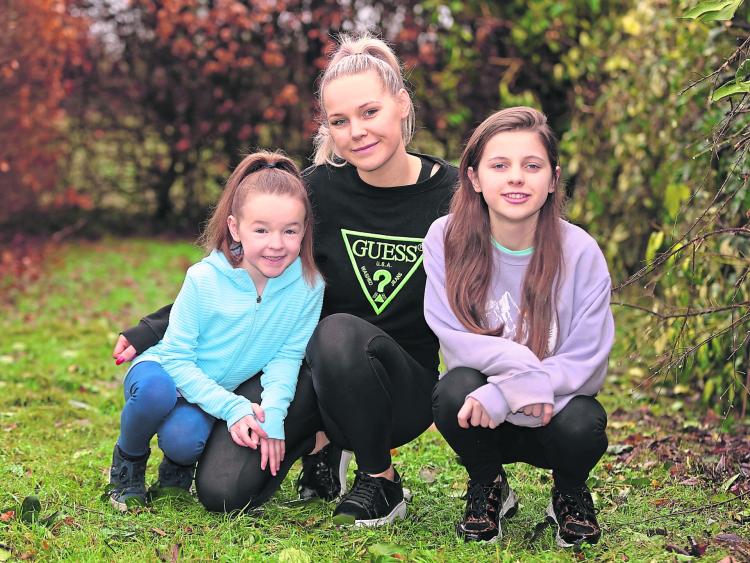 Lynsey Bennett with her daughters, Zoe and Hailee

The eyes of the nation were firmly fixed on Longford woman, Lynsey Bennett in February when she jetted off to Mexico for four weeks of intensive cancer treatment.

The 32-year-old mother of two has battled cervical cancer twice already and come out the other side but was told in the autumn that the disease had returned and, this time, she wouldn't be cured by the treatment.

Fundraising efforts in aid of Lynsey were hugely successful, with the organisers of the Shroid Christmas Tractor Run announcing last week that they had managed to raise an incredible €21,000.

“It is outstanding, during Covid times, when we were in a level five lockdown and still so many people made such an effort to come out and support - way more than was ever expected,” said Lynsey.

“I think it was €20 per tractor. People were unbelievably generous. When I collected the cheque, I didn’t know what to say. I was left speechless.

“People always say how generous and supportive the Irish are. But the people of Longford and surrounding counties were so generous, it was phenomenal and I am truly grateful.

“I don’t think that I’ll ever be able to express how grateful I am for the support. A lot of people are out of work at the moment but people still came and showed their support.

“I just want to say a massive thank you to Shroid community and committee that set all this up. I’m looking forward to the next tractor run they set up. I can’t wait to volunteer and to give back. I was hoping to donate to them for a defibrillator for Shroid.”

Between the tractor run and a GoFundMe campaign, Curing LynseyBee, which has to date raised close to €90,000, Lynsey was thrilled to be able to travel to Mexico where she spent four weeks at the Oasis of Hope Hospital.

“Mexico was such a fantastic idea,” said Lynsey.

“It really exceeded my hopes and what I was expecting. I was hoping to boost my immune system. I wanted to be the healthiest I could be while having cancer.

“When they did the ultrasounds over there, they found that some of my tumours and lymph nodes had a reduction. And the other tumours stayed the same,” she continued.

“But also, the tumour markers in my blood came down as well, so it wasn’t a case of the scan being wrong, there was actually a reduction in the markers.”

Diet has been a huge factor in Lynsey’s treatment and in Mexico she found herself enjoying a variety of fresh, healthy foods.

“Diet is so vital in all of this. This is my first time having cancer that I actually don’t just eat whatever I can keep down or whatever is available. I’m eating healthy and I can’t believe the difference,” she said.

The healthy diet and lifestyle is something she was eager to continue when she got home from Mexico after four weeks apart from her two daughters, Zoe and Hailee.

“So I didn’t tell the girls that I was back in the country because I didn’t want to give them a day and then have to cancel on them. But when I came home, they were so happy. Hailee couldn’t speak for about an hour, she just kept hugging me and looking at me, and Zoe was delighted too.”

Lynsey has been sharing her story on her Instagram, @cancerwithgratitude, and has been inspiring others to follow her lead and seek treatment in Mexico.

“I just want to wish the best of luck to anyone who is following in my footsteps and going to Mexico,” she said.

“I know there’s one girl there at the minute that said she was there because of me, and there are a few others who want to go over.

“There’s one girl from Longford who is looking to go over there. I just want to wish them all the best,” she concluded.