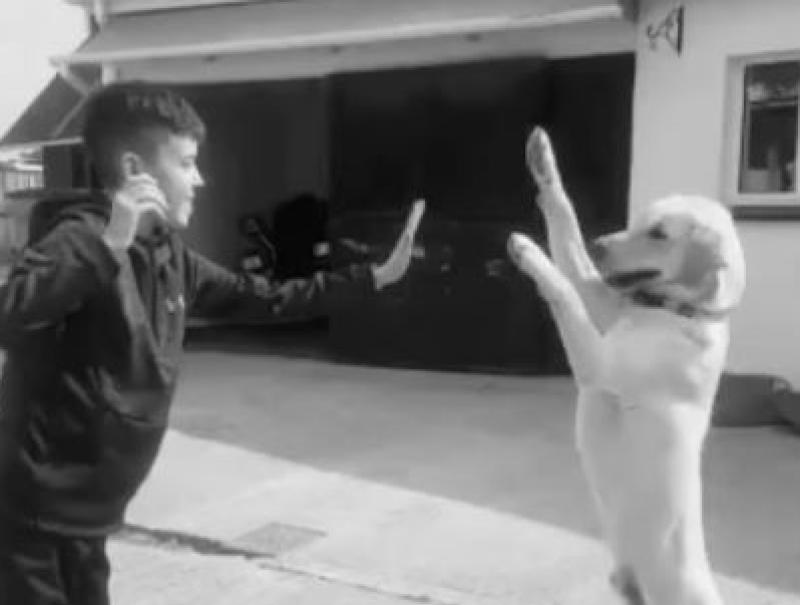 The memory of Cian Neary is well and truly alive on social media this week following the launch of Cian’s Kennels’ new Hi5 challenge to raise funds for the very worthy charity.

Cian Neary passed away in September 2019 after a battle with cancer. While he was in hospital, his parents did their best to bring his beloved dog, Cooper, to Dublin to cheer him up and it worked a charm.

Since the 15-year-old Killashee boy passed away, his family have worked tirelessly to get a charity up and running in his name.

When in hospital, Cian pined for Cooper. With the support and goodwill of many people and organisations, his parents managed to bring Cooper to Dublin and base him in kennels near the hospital.

Cian visited Cooper most days and it had a huge positive impact on the local teenager.

Cian remained in hospital and on treatment until the last week of his life and having Cooper based near the hospital allowed him to enjoy many occasions and outings in Dublin, knowing Cooper would be safe nearby.

Cian’s family now hopes to bring that same joy to other sick children and their families via Cian’s Kennels, which will see the charity work to house beloved pets near the hospital so that the children can see them and experience the same comfort that improved Cian’s final weeks.

Covid-19 has obviously had a huge effect on the types of fundraising events that can be held in aid of Cian’s Kennels or any other charity but has seen a huge surge in virtual events.

One of those events is taking place online this week to celebrate Cian’s upcoming birthday.

Cian’s family have put a call out to pet owners across the country to recreate the high five featured in the Cian’s Kennels logo, and pictured here, with their own dogs. If you haven’t got a pet, grab a stuffed toy and join in.

The rules are very simple: do the high five with your pet, donate €5 via GoFundMe, post the video on Facebook, Instagram or TikTok and challenge five of your friends to take part by tagging them. Don’t forget to tag Cian’s Kennels and use the #CiansHi5 tag in your posts.

You can donate via Cian's Hi5 Challenge on GoFundMe.