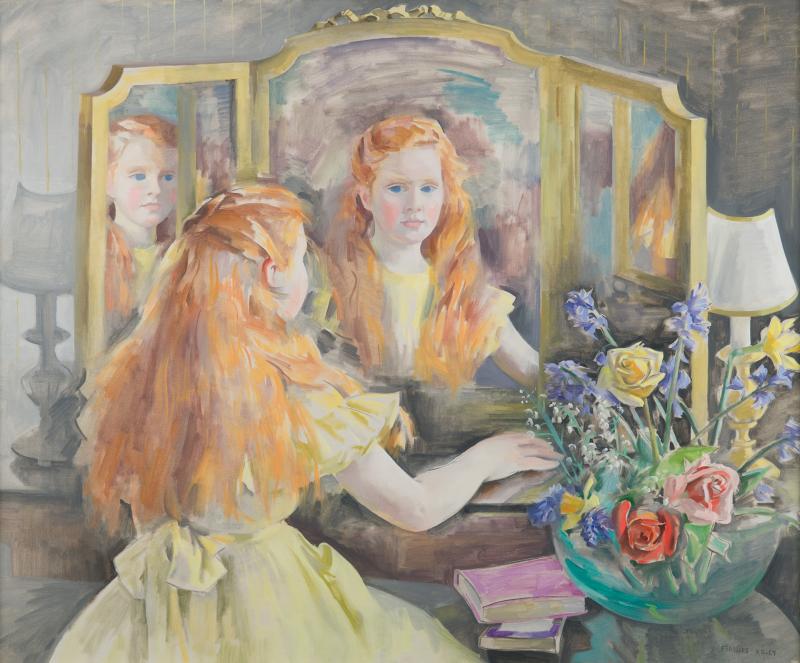 Painting of Eavan Boland as a young girl by her mother, artist Frances Kelly. Courtesy of the Boland Family.

Backstage Theatre have teamed up with Druid Theatre to bring a new theatrical production streaming live from The Mick Lally Theatre, Druid’s home in Galway, from Thursday, April 22, to Saturday, April 24.

‘If there was a narrative to my life in those years, then let this be the sound of it.’ – Eavan Boland

With words by Eavan Boland, edited by Colm Tóibín and directed by Garry Hynes, Boland: Journey of a Poet explores the mind and imagination of one of Ireland’s great poets, Eavan Boland.

The latest in Druid’s online theatre series, Druid at Home, the production will also be made available on demand for a limited period, following the live stream performances.

Eavan Boland passed away on 27 April 2020; her first-year anniversary will fall during the period of this new production, a fitting tribute to the late poet.

Garry Hynes, Druid’s Artistic Director, said: “Eavan Boland is an extraordinary Irish poet and essayist, and her standing only grows with time. Working with her words, edited by Colm Tóibín, I am excited to bring this new live stream production to audiences throughout Ireland and the world.”

Colm Tóibín added: “I feel privileged to have been commissioned by Druid to edit the words of Eavan Boland and present this new interpretation of her life and work. It is my hope that her writing will forever be cherished by Irish people and people around the world, and that this production will remind us of her stature as a major poet.”

Inspired by Eavan Boland’s mother, the expressionist painter Frances Kelly, Boland: Journey of a Poet will feature the Irish artist Debbie Chapman live on stage who will create a piece of art in response to the production.

The poster for this production also features one of Frances Kelly’s paintings, a portrait of her daughter Eavan Boland as a young girl.

Boland: Journey of a Poet is the latest in Druid’s series of online theatre, entitled Druid at Home. In February of this year, they presented the world premiere of Sonya Kelly’s Once Upon a Bridge and, in March, an encore screening of their 2020 production of The Cherry Orchard. These productions were also streamed to audiences around the world, making Irish theatre accessible to global audiences.

Live stream from April 22 to 24, with on Demand availablefrom April 27 to May 2. Tickets for the live and on demand productions are available on backstage.ie.