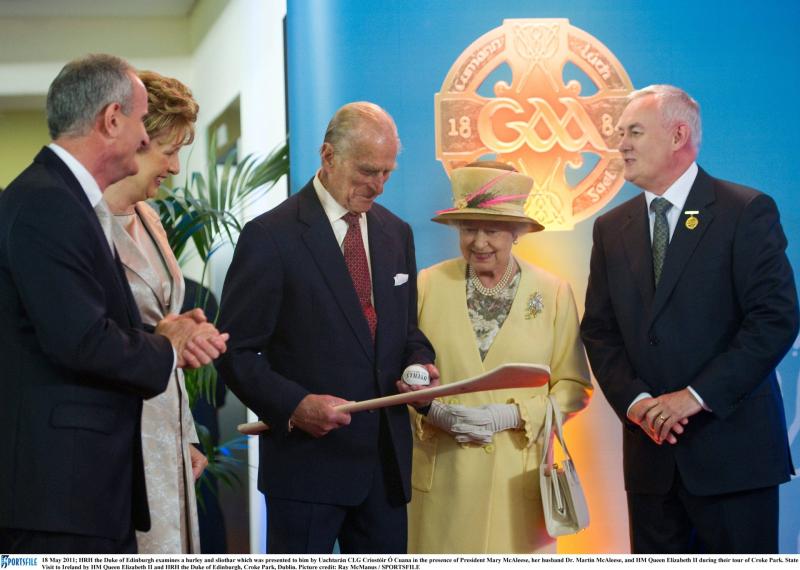 May 2011: The Duke of Edinburgh examines a hurley and sliotar presented to him by GAA President Christy Cooney in the presence of President Mary McAleese, Dr Martin McAleese and HM Queen Elizabeth II

Prince Philip, Queen Elizabeth II's husband, has died, aged 99, it has been confirmed by Buckingham Palace.

A short statement said: "It is with deep sorrow that Her Majesty The Queen has announced the death of her beloved husband, His Royal Highness The Prince Philip, Duke of Edinburgh. His Royal Highness passed away peacefully this morning at Windsor Castle."

The prince married Princess Elizabeth in 1947, five years before she became Queen, and was the longest-serving royal consort in British history.

Mr Martin said, “My thoughts and prayers are with HRH Queen Elizabeth and her family today, on the occasion of the passing of His Royal Highness The Prince Philip, Duke of Edinburgh.

"Ireland remembers the great success of the State Visit to Ireland in 2011 by Queen Elizabeth and Prince Philip, a historic and important occasion which was a key moment in our bilateral relations. This was followed in 2014 by the State Visit to the United Kingdom by the President and Mrs Higgins, when they were hosted so generously in Windsor Castle and across Britain.

"The commitment of the Royal Family to Irish-British relations is an important part of the work we do together - and today we pay tribute to Prince Philip’s own important contribution.”

Most Revd John McDowell, Archbishop of Armagh and Primate of All Ireland said, "With profound sympathy for Her Majesty the Queen, I wish to express my sincere condolences to her and her whole family on the death of His Royal Highness the Duke of Edinburgh. Her Majesty’s sense of loss must be very great after over seventy years of unbroken love and friendship.

"In remembering and reflecting on a life of service, including as an Naval Officer in the Second World War, we recall his exemplary sense of duty to the nation and Commonwealth over seven decades and, most especially, his love, honour and obedience to Her Majesty.

"Prince Philip accepted and developed a unique role in the life of the United Kingdom, always closely supporting the Queen as her “liege man of life and limb”, and continuing to serve in an active public life which continued long after many would have sought to lay aside a heavy burden of public service.  My prayers will be with the Royal Family in the days to come.’