Where is Richard Halliday? Concern grows for missing US soldier who grew up in Longford 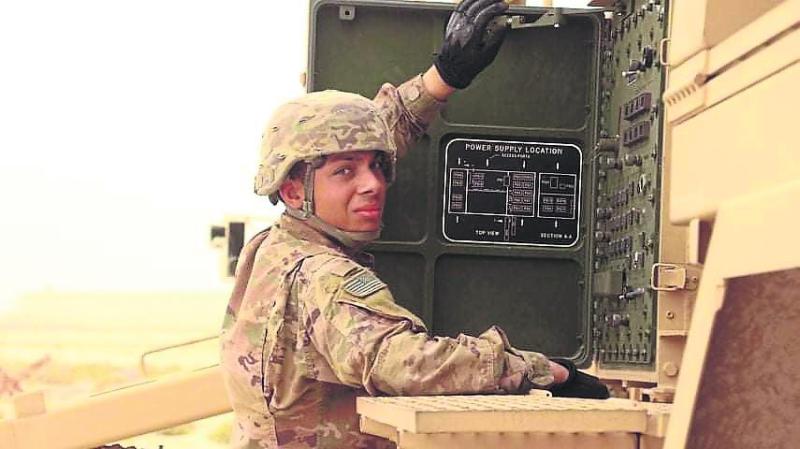 #FindRichardHalliday: Private Richard Halliday (21), previously from Drumroe, Ardagh in Co Longford: The last occasion that missing Richard spoke to his mother was on July 23, 2020

Parents Rob and Patricia Halliday stayed in El Paso for four months, rallying at the gates of Fort Bliss searching for information #FindRichardHalliday

It is now over 250 days since Private Richard Halliday (21), previously from Drumroe, Ardagh in Co Longford disappeared from the barracks in Fort Bliss, El Paso, Texas, where he served in the US Army.

It was only after 36 days, when his parents hadn’t heard from him, that Rob, his father, called the unit and was told his son had gone AWOL and was by that time regarded as a deserter.

After this initial shocking news, Richard’s parents discovered that his unit wasn’t even searching for him. This concerned them greatly and they decided to go to El Paso to get more information.

US citizens, with German and Irish relations, Rob and Patricia Halliday bought a cottage at Drumroe when Rob was working in Germany.

He was an officer in the US Army at the time, but hoped to work from home in Ireland. The idea was to create a self-sustaining life-style, while Patricia, his wife, would home-school their four children. Unfortunately the office needed Rob to stay on in Germany.

Together, as a family, they, however, transformed Drumroe into a beautiful house and elegant garden with vegetable patches, a hothouse and chickens.

They were very involved in the Ardagh and Longford community, e.g. church, girl guides and karate. They lived here for over ten years.

When Richard, the youngest of the four children, completed his Leaving Cert, he decided to visit his oldest sister, Hannah, who was by now married and living in Seoul, South Korea.

It is from there that he decided to join the US Army as a volunteer.

After Richard was accepted and started his voluntary two and a half years in the US Army, he excelled on almost every terrain: he was first in his unit’s basic training and received $500 as reward.

He received 100% in fitness, was the fastest runner and was the unit’s guidon bearer, an honour for a US soldier. He received three merit awards during his first year and was also promoted ahead of his peers. He was then on detached duty overseas and on his return he was posted to Fort Bliss. Here things seemed to go wrong for him. And Covid-19 hit the world.

The last time Patricia spoke to Richard, was on July 23 2020. They noticed that he had become evasive in his phone calls and that he was not happy in this unit. He said that he couldn’t really share any detail of what he was doing or how he felt and that he always had “someone with him”.

After that last conversation, Richard disappeared - about two weeks before he would have finished his military service. He had many plans for when he returned to civilian life and hoped to also return to Ireland.

It is understandable that Richard’s parents were extremely upset when they found out that he was missing and thought of five possible explanations: He did desert the Army, he was in an accident and lay injured somewhere, he was abducted, he committed suicide, or he was murdered. With more information they dismissed the first four, but still hope that he might have managed to walk away. But with no sign or proof of any activity, e.g. bank accounts, the chances are slim.

Only when Rob and Patricia started asking questions when they visited the unit did they discover that he was punished severely for over three months for minor offences, which involved underage drinking at age 20 and disobeying orders.

They learned that he had to wear full ‘battle-rattle’, as the full army gear is referred to, in the heat of the desert, over 32 degrees Celsius, having to wear a face mask the whole time, being kept busy for about 18 hours of the day, his salary halved and his promotion degraded with three levels. He also had an escort all of the time.

Those who have experience of the army, would know how one can be humiliated, but even sources among Richard’s peers said he ‘worked like a dog’ and alleged he was humiliated in every possible way, to such an extent that they thought it was inhumane and torturous. At the end he was so exhausted, he had to be dragged out of bed.

The Hallidays’ view is (remembering that Rob was in the Army, as was Richard’s grandfather), “The intent of Article 15 is non-judicial punishment, as a means of providing restitution. Richard's Article 15, as administered, was not restorative and certainly not part of a rehabilitation plan. It was deployed on a volunteer soldier to strike fear in all witnesses, an act of tyrannical power. It was cruel and abusive. … it was used as a weapon to destroy him and not as a tool for rehabilitation and restoration. The Article 15 administered to Richard was a manoeuvre to make an example out of him. Why? For what?”

Rob and Patricia think they have some answers by now and are still finding out more and more. They decided to go to El Paso themselves, in the hope of getting more information from the unit’s leaders and to search for Richard.

Rob and Patricia stayed in El Paso for four months, rallying at the gates of Fort Bliss with posters, pamphlets, candles, asking people to pray for Richard and encouraging soldiers and anyone who knew anything, to volunteer information, even anonymous.

They also promised a reward for information that led to finding Richard. A Gofundme page was opened by a friend in order to raise the amount. They have over $16,000 by now, but hope to increase it to $20,000. You can support the fund by logging onto Find Richard Halliday on www.gofundme.com After this, the Army put out a reward of $25,000 for information that would lead to finding Richard.

Gradually individuals approached them in the streets, or secretly and via text messages with pieces of information.

This led to Rob and Patricia following up leads themselves, walking miles and climbing mountains, visiting hell-holes in Juarez, across the border in Mexico. They started to piece together some of the activities going on in the barracks.

Patricia started a live post on Facebook, twice daily, explaining their endeavours and creating a support group, called #FindRichardHalliday. She vowed to be transparent and truthful.

It has been a very difficult year for the Halliday family as they sold their house during this time of searching, had to go back to pack, moved to a different location, unpacked, supported their other children, of which Richard’s brother, Robert, and his wife had their first baby, and Patricia’s father fell seriously ill. Patricia is currently helping to take care of him.

When they received more specific leads, they hired people to follow it up. Launching all these searches requires finances, so a good friend started a page #Adoptasearcher, in order to assist and reward the Mexican searchers. Many of them didn’t want any reward, but used the opportunity to search for some of their own loved ones who had been missing for years. All the information can be found on the Facebook page #FindRichardHalliday.

The Hallidays have learned a lot from the Guillen family, whose daughter, Vanessa, disappeared from Ford Hood and was later found murdered. She too was regarded as AWOL and a deserter until her body was found.

Therefore the Hallidays had been fighting for all Articles 15s on Fort Bliss to be deferred until a team can investigate each case for their “rightful purpose, rehabilitation and restoration”.

Further in their plight: “How can we continue to allow this injustice to rule over and ruin the lives of our volunteer Soldiers and their Families? The US Army owes Richard restitution. We request Richard's unjust Article 15 be rescinded immediately. How can leaders who are aware of this use of tyrannical power be silent?”

A petition has also been set up on www.gopetition.com called ‘Rescind Richard Halliday’s Unlawful Article 15’.

Major General Sean Bernabe, who was not the commanding general at the time when Richard went missing, admitted during a press conference, reported on by many media outlets, including the El Paso Times and NBC news, that mistakes were made.
He also ordered an inquiry into the leadership, climate and treatment of soldiers in Richard Halliday's unit in the wake of the disappearance.

“Frankly, we made two mistakes early on," Maj Bernabe said. "First, despite attempts, we failed to make timely initial contact with the Halliday family, when we discovered Pvt Halliday missing. This failure caused us to lose the trust of the Halliday family. We are working hard to regain their trust."

The second mistake was that Fort Bliss was too slow to ask the US Army Criminal Investigation Command, commonly known as CID, for assistance when Halliday first disappeared.

"Fort Bliss continues to make a broad appeal for information from the public to help us find Pvt Richard Halliday," Maj Bernabe said. "We owe it to every family and every service member to search for missing soldiers until that soldier is found."

The US Army has now revised their policy regarding soldiers who are absent for duty, from assuming that they are on AWOL, to missing. A plan to search first has also been put in place.

Further information can be found on the Facebook page #FindRichardHalliday