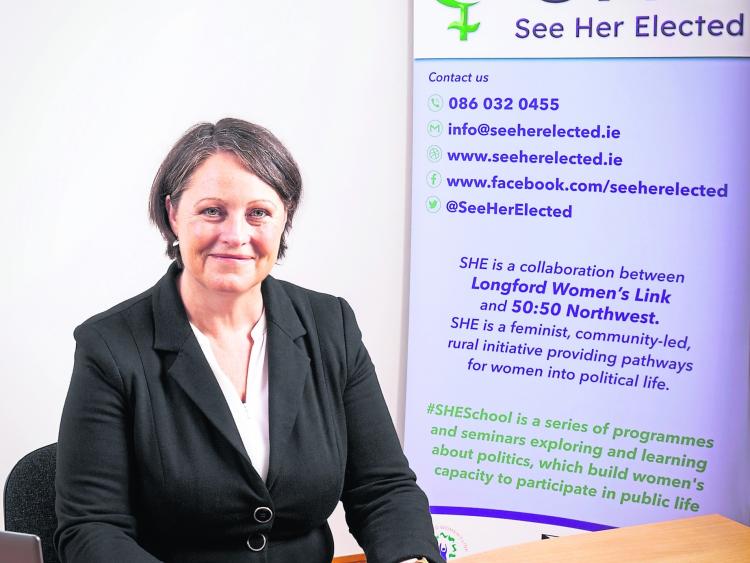 Dr Michelle Maher is the See Her Elected Programme Manager.

It is unsurprising that the language used in the cut and thrust of politics can be insulting, but when it moves beyond what anyone might deem as acceptable it becomes abusive and threatening.

Some of this language we recognise immediately as dangerous. It is essential that we all call it out as such.

Other language used around politicians may not be dangerous. But it can be just as effective at reinforcing gender stereotypes about who our politicians should be.

Just this week we see the Mayor of Galway City Council, Councillor Mike Hubbard stepping back from his role following the escalation of threats made against him and his family. Also reported in the last few days is that the Gardaí recently increased armed security around Tánaiste Leo Varadkar.

This is not a recent escalation of dangerous abuse. For example, in 2018, Senator Lorraine Higgins was subjected to a two year long campaign of threats, including stalking. In 2014 the then Councillor Catherine Martin had to make a complaint to Gardaí following a threat of sexual violence against her.

Increasing numbers of politicians report levels of abuse that it is difficult to imagine being levied at any other profession. Much of this happens online, and is targeted at female politicians.

It is little wonder that Ireland is ranked 101st globally for female parliamentarians. Women account for just 22.5% of TDs and 40% of Senators. Just four of the 15 Cabinet ministers are female. Of the 949 county councillors in Ireland, just 226 or 24% are women and that figure is even lower in rural counties than urban centres such as Dublin.

The SHE (See Her Elected) Programme seeks to empower more women in rural counties of Longford, Roscommon, Leitrim, Sligo, Donegal and Westmeath to engage in electoral politics and also examines some of the barriers deterring women from entering politics.

One of these barriers is the language used in relation to female politicians. In addition to overt abusive and threatening language, women in public life in Ireland will also encounter language of a more subtle yet equally deterring nature.

The depiction of Sinn Féin party leader Mary Lou McDonald as a witch in a cartoon featured in a recent edition of the Sunday Independent is one example.

It caused anger and was denounced by many women’s groups and female TDs and Senators across the political divide. Why?
On the face of it, the cartoon shows Mary Lou McDonald pouring a packet labelled ‘Sinn Féin frenzy’ into a bubbling cauldron with ‘electorate’ written across it. Some would argue that the cartoon was merely satire and that female politicians just as their male counterparts are fit subjects for public scrutiny.

However, when you place this cartoon depiction in the context of how insults of powerful women are used to cut them down to size, you begin to see language being used to amplify a degree of discomfort that persists about women being in power.

We have plenty of examples.

In 2011 the UK Prime Minister David Cameron told MP Angela Eagle to ‘calm down dear’ in a debate in the House of Commons. His remarks were correctly categorised as sexist and patronising.

In the United States the phrase ‘she was warned…nevertheless she persisted’ became a rallying call for women when it was uttered by Senator Mitch McConnell in relation to Senator Elizabeth Warren.

And talking of witches - Hilary Clinton was described as a witch throughout her career and Australia’s first female Prime Minister Julia Gillard met with chants of ‘ditch the witch’ while she was in power.

The connection between women and witchcraft has long been recognised as a deeply rooted misogynistic notion as at its core it suggests that women’s perceived lack of intelligence made them submissive to demons.

Closer to home, we have research data with women candidates in the 2019 local elections all reporting incidences of patronising or sexist behaviour, with some women describing this as normal.

Sadly, examples of such everyday sexism in politics are plentiful.

One that sticks out dates to 2010 when Brian Cowen’s reaction during a heated debate with Joan Burton was to ask her party leader Eamon Gilmore to ‘try and reign her in now and again’.

More recently, TD Holly Cairns has spoken about being elected to Cork County Council and watching a male colleague congratulating other newly elected male councillors on their campaign but reserving a ‘well done, you look great’ for her.

The reality is that patronising language used towards women politicians and candidates reinforces the notion that politics is the preserve of men.

The subtle sexist language and the abuse make it harder for women to see themselves entering a career in politics.

We need to see more women in decision making roles and if our public figures are to truly represent the electorate then we need to have more female representation at Local Authority, Dáil and Seanad levels.

It is important to have a female perspective at decision making levels as this will ensure more balanced decisions are made on a range of issues which matter to us as women whether that’s climate change, finance, employment, parenting, care or violence against women.

We need to empower other women to achieve and enter the political arena- the unique perspectives of women do not need to be feared but rather embraced as part of a collective strength which can only benefit and enhance the political system.
And that’s part of the reason why it truly is ‘Time to Ditch the Witch’.