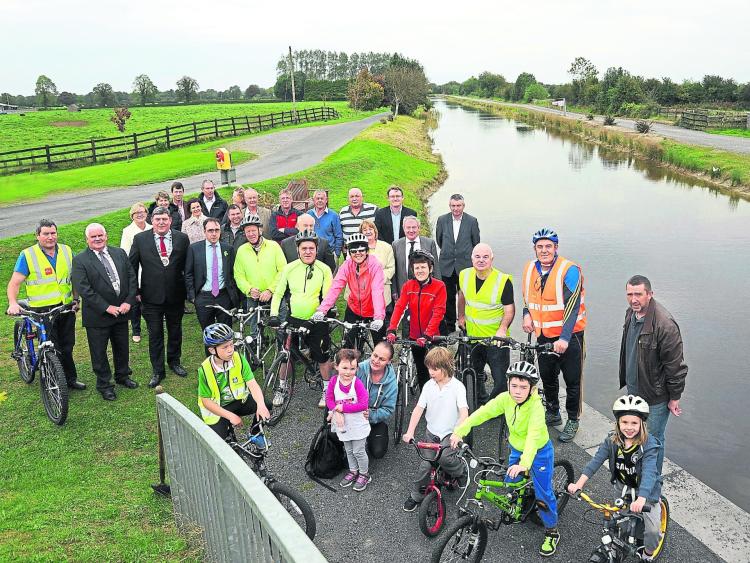 The Royal Canal Greenway project will transform towns, villages and communities in Longford, according to Sharon Lavin, Head of Mareting and Communications at Waterway Ireland.

The Royal Canal Greenway stretches 130km from Maynooth to Clondra, where the canal joins the River Shannon, and into Longford town along the Longford branch. The project is valued at €12m and will be officially launched on March 24 via a virtual event.

The Greenway will be an opportunity for Longford to embrace local amenities to ensure there are things for visitors to see and do along the way.

“Signage will be critical to show how far the next stop-off point is and signage will have the distinctive greenway branding,” said Ms Lavin.

“There will be storyboards along the route to tell local stories and there will also be the distinctive shoes of the famine way.”

Presenting the product to Longford councillors last week, Ms Lavin referred to the Great Western Greenway which, in its first year, saw 45,000 visitors, contributing €7m to the local economy and providing 39 full-time jobs.

In recent years, the Western Greenway has averaged 250,000 annual visitors and has enabled a platform for innovation and enterprise with new businesses setting up, including bike hire, guided tours, hospitality and services like food and drink, shopping, accommodation and taxi services.

Research trends, Ms Lavin explained, show that there has been a renewed appreciation of the outdoors, fresh air and spending time with others outside.

Since the pandemic, there is also a greater emphasis on holidays at home or close to home. There’s also a desire for simple pleasures, shared with friends and family, she added.

“We need to develop vibrant and attractive services for visitors. We want to encourage them to explore. We’ll continue to work with Fáilte Ireland and the tourism offices to entertain them while they’re here and get them to come back,” said Ms Lavin.

“It’s very important that businesses work together to provide packages and bundles to encourage people to stay overnight.”

The Waterford Greenway has been hugely successful in recent years with an average spend of €28.50 per person with 80% of visitors staying in paid accommodation. It is used most by families and 91% of those planned a loop or return journey to their starting point.

“In the same period at Ballynacargy, there were 10,841 journeys.”

The product is opening up in “a crowded market”, Ms Lavin added, so the Royal Canal Greenway will need to stand out.

“We’re going with the tagline, ‘One trail, endless discoveries’. We’re following the 200-year Royal Canal and there is so much wildlife and wonder along the way. There are beautiful vistas along the route, as the seasons change. It’s important that we continue to share those images.”

Councillors were very impressed with Ms Lavin’s presentation and are excited to launch the Royal Canal Greenway on March 24.

Cllr Gerry Warnock noted that, since the pandemic began, there has been a renewed sense of value for local amenities.

“There’s a huge ambition for a lot of people in Longford town to reinstate the canal and bring it back in and connect to the Longford branch of the Royal Canal,” he said to Ms Lavin.

“It’s very hard to make a business case for that to happen again. What assistance can Waterways Ireland offer to us to put forward a case when we're looking to get funding, which would be quite substantial?”

Cllr Peggy Nolan agreed with Cllr Warnock that the canal would be an important amenity “to bring people into the town and keep them there”.

Ms Lavin agreed that the Longford branch would be a very valuable asset to the town and said that Waterways Ireland would be happy to work with the council.

“I’m unable to give specifics today but we are willing to partner and please feel free to engage with us in your plans,”she said.

“Longford has a huge amount to offer and I think there will be huge opportunities. We will be featuring what there is to do in each of the towns.”

Cllr Pat O’Toole emphasised the importance of signage along the route but asked about the possibility of extending the route from Maynooth to Dublin to allow even more visitors to use the amenity.

“The link to Dublin is not just a Waterways Ireland project. There are plans to develop the Royal Canal Greenway to Spencer Dock, running to Clondra,” said Ms Lavin.

Chief Executive Officer of Longford County Council Paddy Mahon said that the council has worked very hard with Waterways Ireland over the years.

“Longford is the largest section of the Royal Canal running 35km from Clondra to Abbeyshrule,” he said.

“It will be a huge contributor to our local economy.”