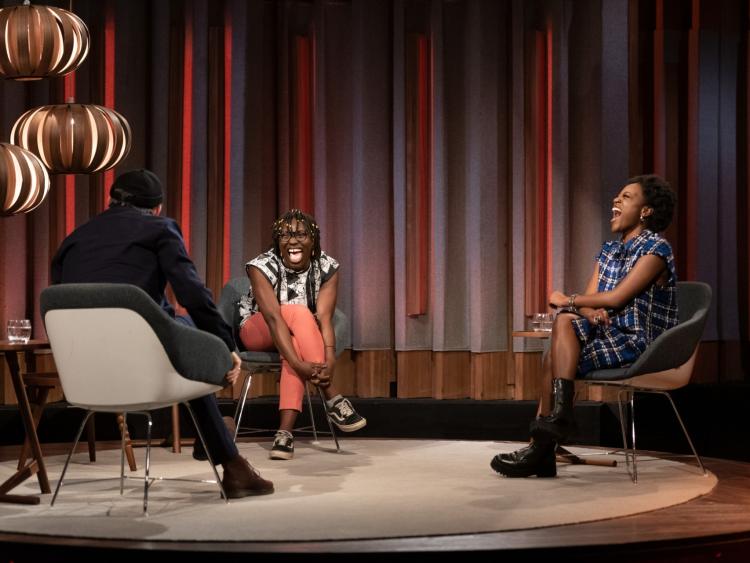 Longford's Felicia Olusanya (FeliSpeaks) and Tullamore's Tolü Makay proved to be a massive hit with viewers of the hugely popular Tommy Tiernan Show on RTÉ One.

Twitter and social media platforms lit up with praise from people who were bowled over by the pair's talent, energy and enthusiasm, and many were calling for the state broadcaster to give them their own chat show!

Nicola Coughlan of Derry Girls and Bridgerton fame tweeted: "You two are just absolute sunshine, my mum is a midlander and she’s delighted with herself seeing two of the midlands own being brilliant on the telly!"

Longford's Síona Cahill tweeted that they were "the breath of fresh joy and gorgeousness and art that we all need. The conversation flowed so well and so joyfully that I could have watched the chats all night."

Doireann Garrihy tweeted that she 'obsessed with the craic Felicia and Tolu are having'.

Tolü Makay shot to prominence recently with her incredible cover of the Saw Doctors classic, N17, accompanied by the RTÉ Concert Orchestra.

FeliSpeaks, was born in Ogun State in southwestern Nigeria. She and her mother moved to Longford in 2003, when she was eight years old. She attended Maynooth University, where she studied English and sociology.

Her poem "For Our Mothers” is on the 2021–2023 Leaving Certificate English curriculum.

Show presenter Tommy Tiernan asked FeliSpeaks to recite her poem and she did, prompting Maïa Dunphy to hail it as 'breathtaking', while Róis Ní Fhloinn said the poem was 'amazing' and 'apt' on the eve of Mother's Day.

Watch FeliSpeaks reciting her poem "For Our Mothers"

In 2018, FeliSpeaks co-wrote her first play, Boy Child, with Dagogo Hart—a story about a boy without a father navigating what it means to be a man through the eyes of the women in his life. Boy Child was featured at the Dublin Fringe Festival, selling out and earning Felicia a nomination as Best Performer.

A newly appointed board member of Poetry Ireland as of August 2020, FeliSpeaks is also a member of Dublin City Council Culture Company’s Culture Advisory Panel. She is a former contributor to Word Up Collective and a founding member of poetry collective WeAreGriot, composed of herself, Dagogo Hart, and Samuel Yakura.

She was commissioned by RTE in 2020 with the poem 'Still' about Ireland’s response to the COVID pandemic.

FeliSpeaks told Tommy Tiernan: "I think in our community, we're good examples. What I love about the Black Irish community, in the older generation specifically, beforehand they don't tell you to go for poetry and singing.

"They say, 'Go and read your medical books, go and be a lawyer now. This is going to bring you money'. But now that we've gone out of our way to do the non-conventional thing and we look like we're doing good at it...my mum is proud."

She also spoke of what being Black and Irish means. "We're both born in Nigeria and moved here as children. I suppose I'm Nigerian-born but Ireland formed a lot of our personalities. There's just quirks and jokes that we straddle both fences on. You're nearly too black to be Irish but too Irish to be Nigerian."

This Thursday, March 18, from 8pm FeliSpeaks will feature alongside Stephen Rea, Matt Molloy, Neil Martin, Brian Connor and Paddy Glackin with Brídín, in 'A tribute to poet Derek Mahon' as part of St Patrick's TradFest 2021. CLICK HERE for more details

“I think part of the complexity is the fact that it is such a young, budding space.”@FeliSpeaks and @ToluMakay talk to @Tommedian about the exciting evolution of the Black Irishness#TommyTiernanShow pic.twitter.com/RWMbZceN2N

You two are just absolute sunshine, my mum is a midlander and she’s delighted with herself seeing two of the midlands own being brilliant on the telly!

YESSSSSSS @FeliSpeaks on #tommytiernanshow tonight with @ToluMakay was the breath of fresh joy and gorgeousness and art that we all need.

The conversation flowed so well and so joyfully that I could have watched the chats all night.

Obsessed with the craic Felicia and Tolu are having, Tommy looking on like a total fan girl #tommytiernanshow

@Tommedian these 2 are fuckin priceless they need their own tv show. Such a brilliant interview #TommyTiernanShow pic.twitter.com/D5p8hMXt79

Yes!!!! Felicia for Leaving Cert 2023! What a legend and imagine being a black or mixed race Irish kid studying that
YUP Longford! #RepresentationMatters #tommytiernanshow

Great show tonight . Joe Slattery would restore your faith in the goodness of people, what an incredible story.

Weren’t they just fab! @FeliSpeaks and @ToluMakay definitely made my Saturday night!

Had to hunt down @FeliSpeaks ' poem 'For Our Mothers' after hearing it on #TommyTiernanShow (link below). Such an apt performance in light of tomorrow being #MothersDay. Amazing!! https://t.co/Jdn1lO9R7V https://t.co/6RF3IbQNDQ

Oh my God @ToluMakay & @FeliSpeaks need to have their own chat show. Their energy is brilliant. I love them

YES THATS RIGHT! MYSELF and @FeliSpeaks on tonight’s Tommy Tiernan show! Make sure to Tune into @RTEOne for the @Tommedian show! Tonight at 9:30pm

I’ve been so excited to share this with you all pic.twitter.com/t0eNbd1VUw