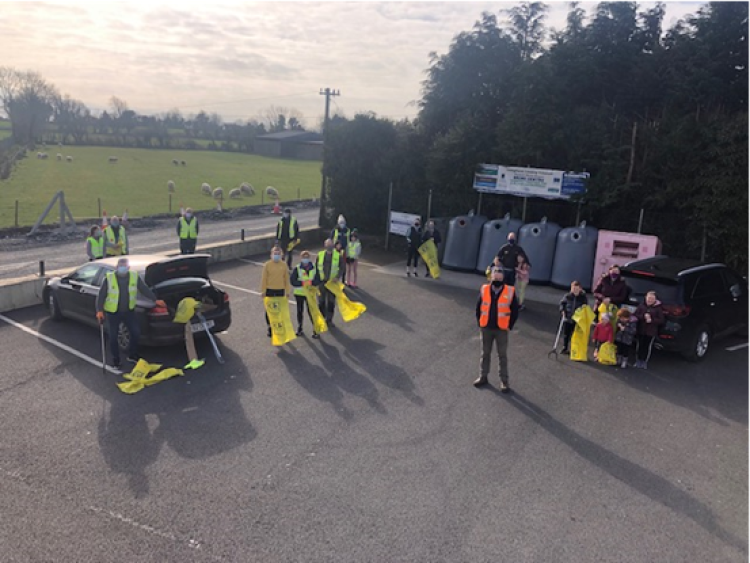 Colmcille Area Development Group organised a community litter pick on Saturday where 38 volunteers turned out for the spring clean.

Chairman of the group Matt McGauran and the committee were delighted with the turn out and in particular the results from the morning’s work.

Two trailers and a van were packed full of litter which weighed 1,020kg - over a Tonne of waste/rubbish.

“The group met at the community centre at 10am and set out for two hours and look at what was achieved. It’s not just litter thrown out of cars but also fly tipping, bags of household rubbish, tyres, glass, beds, mattresses, bicycles etc,” said Mr McGauren.

“It’s absolutely terrible and soul destroying to see such mindless pollution not to mention the environmental impact.”

Matt went on to thank the local volunteers, Longford County Council and Environmental Officer Gary Brady, Longford Community Resources Clg. and the local representative Cllr Garry Murtagh for their help and support in making the event a huge success.

“We are hopeful that over the next few weeks that more and more people would come forward and support our ‘Pick A Mile’ campaign,” he said.

“We, the committee through the support of Longford County Council would provide litter pickers, bags, gloves to anyone that is willing to get involved to walk a mile from their gate and pick the rubbish along the road verges.

“The committee would happily collect the bags of rubbish on the route that evening. It is envisaged that with enough volunteers that every mile in the parish, indeed the county would be covered.”

Cllr Garry Murtagh told the Longford Leader it was a pet hate of his to see mindless littering and in particular dumping and fly tipping throughout the county.

“It’s been brought up on numerous occasions at both council and municipal district meetings. It’s disgraceful to see rubbish dumped into ditches and streams eventually making its way into our rivers and lakes,” he said.

“Which in our case is Loch Gowna where over 5,000 people are receiving their main water/drinking supply, so it’s not only having an impact on our environment and fragile ecosystems, but also human life.

“I think I can safely speak on behalf of the majority that it’s simply not good enough nor expectable that this mindless dumping is allowed to continue.

“I am aware there is a legal case on-going at the moment, involving dumping, mobile cameras and GDPR, which is hindering Local Authorities from doing their work.

“However, I believe it’s time to by-pass the middleman and look at alternative ways of recuperating the expense of waste removal for everyone and it might see the end to dumping/fly tipping once and for all.”