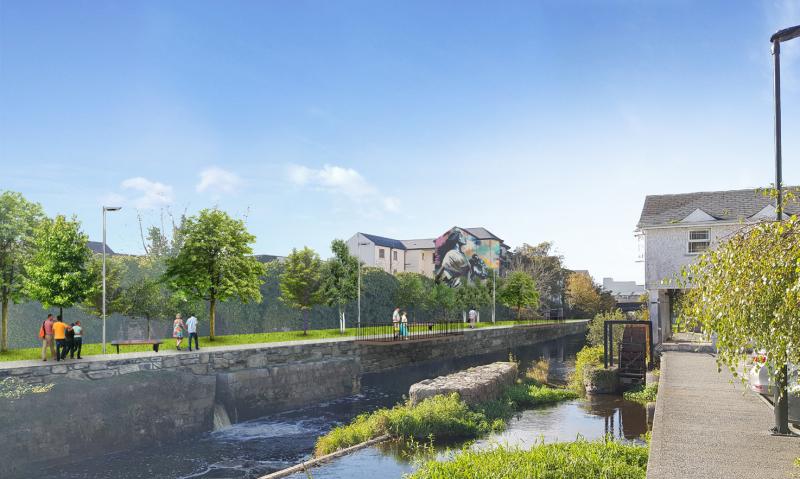 An indicative artists' impression of how the Camlin Quarter will look

The funding was confirmed today, Monday 8 March by Minister for Housing, Local Government and Heritage  Darragh O'Brien and Longford Westmeath TD and Minister of State with responsibility for Local Government  and Planning Peter Burke.

This ambitious project, together with the already commenced €4 million Longford Connected Project, will completely transform the core of Longford town, increasing footfall from both locals and visitors by  improving the commercial environment and attracting future inward investment to address the cycle of  economic downturn of recent years.

Cathaoirleach Paul Ross explained “This is Longford’s time to shine. This project represents a visionary  approach and is the single biggest government funding investment to come to Longford (€10.44 million plus €3.48 million match funding by Longford County Council), which will take three to four years to complete and  will see the culmination of a number of plans for the area including the Camlin Masterplan, which reimagines the area underlining the importance of the Camlin River as a key asset within the town centre.”

This area has suffered the loss of key commercial services in recent years which has decreased footfall causing  overall decline. This project is a series of interventions to re-energise more than 55 acres of the northern  town core area. It prioritises the pedestrian experience, celebrates the historic significance of the area and  most importantly, will attract sustainable public and private sector investment to stimulate the immediate  economy.

Delighted with the news, Chief Executive Paddy Mahon said “This is a vote of confidence by central  Government in the ambition shown by Longford County Council to deliver a series of transformative flagship  projects for Longford Town that we have been planning since 2018. We remain confident of further large-scale  central Government supports in the time ahead which will enable Longford County Council to unlock the true  potential of Longford town.”

Cathaoirleach of Longford Municipal District Peggy Nolan paid tribute to the Executive of Longford County  Council. “I wish to compliment everybody involved in this exceptional achievement. This is the result of five  years of working together because together we’re stronger. Nobody knows the needs of the people of  Longford better than those who serve and as Cathaoirleach of Longford MD, I want to acknowledge both my  fellow Elected Members and the Executive for their dedication and diligence.”

Chief Executive Paddy Mahon emphasised the Council’s commitment to the project and the importance of  consultation and collaboration with businesses and communities. He also said “The forward-thinking decision  taken by elected members in recent years to increase the Local Property Tax has enabled Longford County  Council to take on such ambitious projects and it has perfectly positioned it to deliver this transformative  vision for this area. It represents a richly deserved return on investment for the Local Property Tax payer and  Commercial Rate payer of Co Longford alike.

Terry Rooney of Longford County Council Regeneration Team said “After so many years of detailed planning,  the members of the Regeneration Team are delighted that this funding is now being allocated. The project,  which will greatly enhance the investment potential of the area, will set the scene for future projects of scale,  planned and proposed”.

Cathaoirleach Paul Ross thanked the Regeneration Team for working tirelessly on bringing the project to this  stage. “Today’s announcement is further proof of the Government’s commitment to the rejuvenation of  regional towns like Longford. Today is the first step in what will be a transformative time for Longford town.  It’s going to change the environment in which we live and work and will continue to make Longford the place  to be.”