‘Unsafe staffing levels’ are a severe threat on diabetes unit 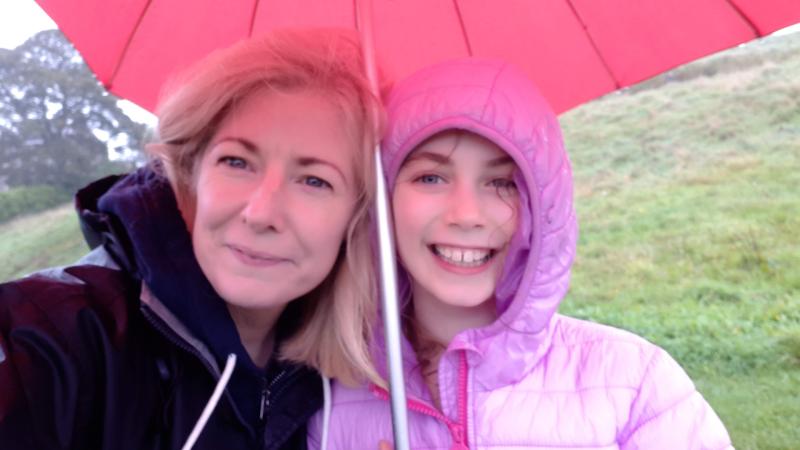 Siobhán Beatty, with her daughter, Emma, who has been attending the Paediatric Diabetes Unit at Mullingar Regional Hospital since she was diagnosed with Type 1 Diabetes last year

There has been widespread public concern among parents over what one local mother referred to as a “lack of true commitment and due care” by the HSE to children with diabetes at Mullingar Regional Hospital.

Earlier this month, the parents of 130 children of the hospital’s Paediatric Diabetes Unit received a letter from Paediatric Consultant, Professor Michael O’Grady, regretfully informing them that “due to ongoing, unsafe staffing levels”, all paediatric diabetes clinic appointments would be cancelled “with immediate effect”.

Prof O’Grady further lamented that the unit as a whole would be under threat if sufficient staffing levels are not reached by this summer.

In response to questions from local TD Joe Flaherty, Minister of State in the Department of Health Mary Butler told the Dáil that a candidate has been offered the position of paediatric diabetic nurse and is due to start employment in the coming weeks.

However, considering the HSE’s lengthy recruitment process, along with the national shortage of Clinical Nurse Specialists (CNSp) and the fact that Mullingar Regional Hospital has been without a CNSp for 14 months, despite concentrated efforts to recruit one, those comments have raised more questions than answers for many.

Statements from the HSE that resources will be provided have done little to ease the fears of local mother, Siobhán Beatty, who said that the HSE needs to inform parents of what permanent resources will be in place when the service reopens, stressing that “the time for half measures has passed”.

“How is it possible that the hospital has advertised, interviewed and offered the position in a five day period of time?” she asked.

“HSE recruitment campaigns usually take on average six months. The consultant, Dr O’Grady, is unaware of any recruitment efforts and is supposed to be involved in the recruitment process.

“We parents have had no direct communication from the hospital, the consultant in charge of the service has been given no further information about what is promised and we have basically heard it all before,” she said.

“This is a matter of grave concern as the HSE and hospital management are undoubtedly failing our children in their duty of care and have been doing so for a considerable time.”

Ms Beatty has been attending the clinic with her daughter, Emma, since she was diagnosed at nine years of age in January of last year.

“I couldn’t speak highly enough of Dr O’Grady who did his very best, under very difficult circumstances, to ensure that we received the required training and information to allow us to understand and treat our daughter’s type 1 diabetes,” she told the Longford Leader.

Management of diabetes in children and adolescents requires a multidisciplinary team, consisting of one Clinical Nurse Specialist (CNSp) per 70 patients (or one per 50 patients on pumps), one full-time specialist dietician for every 150 to 200 patients, social workers and psychologists.

The Paediatric Diabetes Unit in Mullingar Regional Hospital currently facilitates 130 children and adolescents, 41 of whom are on insulin pumps.

Based on these numbers, the unit should have two full-time CNSp and dedicated dietetic support for diabetes in the region of 25 to 33 hours per week.

Currently, the service has no CNSp, dietetic support for diabetes amounting to just three hours per week, no social work and no psychological support.

“While efforts have been made to hire a nurse, the specifications of the job are very narrow requiring both diabetic and paediatric specialties,” said Ms Beatty.

“While one nurse is promised for 2022 we are left with the prospect of having no nurse at all for the whole of 2021, having made do without one, due to the generosity of Prof O’Grady, for more than a full year already.”

The Paediatric Diabetes CNSp for the unit retired in May 2019 and, while she provided partial cover until November 2019, there has been no specialist diabetes nursing support in the unit for 14 months.

There is a national shortage of people trained to work as a CNSp in Paediatric Diabetes, with a requirement for candidates to have a paediatric nursing background.

As far back as June 2019, Prof O’Brady asked that the HSE remove the paediatric nursing background requirement in order to broaden the field of potential applicants to nurses trained in diabetes management.

His requests, however, were ignored and, when the post was first advertised in 2019, there were no eligible applicants. While Prof O’Gorman was keen to re-advertise the post immediately, the HSE recruitment service advises at least six months between campaigns and it was not until September 2020 that the post was readvertised.

However, a successful candidate for the position would not be able to take up regular employment until next year.

“Due to the ongoing lack of any multidisciplinary team, the future of the diabetes services for children in Mullingar is now under serious threat and could conceivably end permanently in the coming months,” said a concerned Prof O’Grady.

“All diabetes clinic appointments for children attending Mullingar Hospital for care are now cancelled with immediate effect and will not resume unless and until appropriate multidisciplinary team resources are in place.”

As a result of these closures and cancellations, parents have desperately been contacting their local politicians for support in requesting the provision of “basic life-saving resources” for diabetic children.

Should the service close permanently, more than 130 patients will be referred to Dublin hospitals, which would likely threaten to overwhelm their services too.

Longford mother Lorraine Kelly highlighted her plight to the Longford Leader soon after receiving the letter from Prof O’Grady.

“This is what we are left with. I’m fuming,” she told the Longford Leader. Her daughter Chanelle has been using the service for three years now.

“What about our kids? Where is the care for them? I’m shocked that this is let happen as the care needed for these children is vital. No appointments now, only if they end up sick (we’re told to) take them to A&E. This is vital for the children’s healthcare and management. This is beyond a joke.”

Another concerned Longford mother, who does not wish to be named, has been attending the diabetic clinic in Mullingar with her 13-year-old son since his diagnosis with Type 1 Diabetes in December 2018.

“We live in Longford and have been attending this clinic every three months to ensure that my son’s diabetes is managed and that it does not impact his life prospects as he grows and develops, while learning to live with his condition,” she explained.

“Prof Michael O’Grady, the consultant paediatrician has worked tirelessly with limited resources to ensure the continuation of the service for his 130 patients. However, as he can no longer ensure the safety of his patients, he has been forced to cease all clinic appointments and no longer accept new patients.

“Should this service close due to these unsafe staffing issues, my child and the 129 other children attending Mullingar will be referred to the diabetic services in Crumlin, Temple Street, or Tallaght hospitals.

“These services are already operating at capacity and the addition of 130 patients to these services will definitely result in these hospital clinics becoming overwhelmed.”

A letter has been sent to politicians by parents of children who are patients in the unit, in a concentrated effort to bolster calls for the HSE to tackle the issue.

Longford/Westmeath TD Joe Flaherty has called on the HSE to urgently advise when a full diabetes clinic service will again be available to parents and children in Mullingar, stating that “it is very difficult for people and especially parents who are trying to manage medication and treatment. It simply cannot be allowed to continue”.