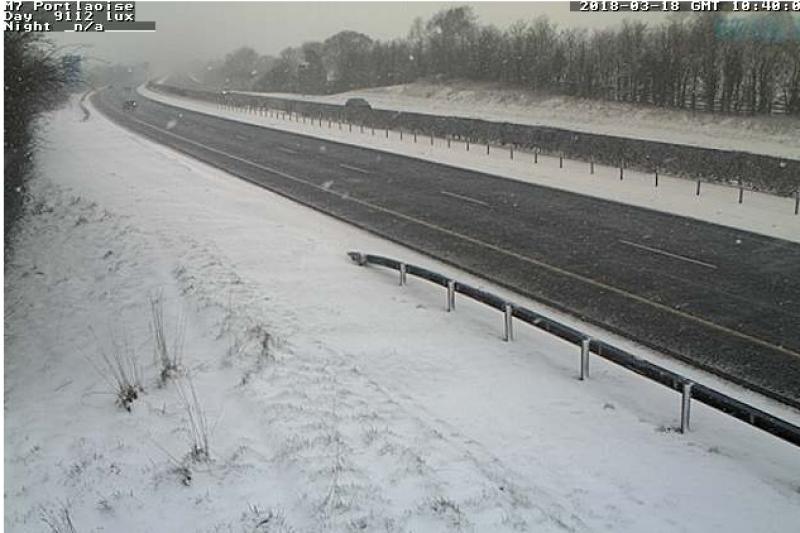 Met Éireann has issued new weather warnings for snow with a 24-hour alert covering the entire country as more snow is on the way to many parts of Ireland.

It says a band of sleet and snow will spread northeastwards during Thursday giving snow accumulations of up to 5cm in some areas (higher over the mountains), but transitioning to rain in the west and south on Thursday night.

A Met Éireann Weather Advisory remains in place for the whole country until 6pm on Wednesday. It warns of very cold temperatures in low single figures by day and with sharp or severe frosts and icy patches at night.

The Advisory says showers of sleet or snow at times in eastern counties. It alerts people to hazardous conditions on roads and paths.

Wednesday will not be an end to it, however. Snow will spread further inland from the east on Wednesday night while Thursday is set to blow snow through the country.

The overview is that it will remain cold and unsettled with more widespread falls of sleet and snow. Becoming windy over the weekend with spells of rain, possibly falling as snow in the eastern half of the country.

The cold snap is being powered by a weather front from Russia which has already caused Storm Darcy which dumped extensive snow on the Netherlands and parts of Europe. It is pushing eastwards in a similar way to the Beast from the East in 2018 which culminated in Storm Emma. FULL DETAILS BELOW.

NATIONAL FORECAST issued at 8:32am February 9.

TUESDAY: Cold and blustery today with scattered wintry showers of sleet or snow giving some accumulations in places. There will be a mix of cloud with some bright or sunny spells too. Highest temperatures of just 1 to 3 degrees, with icy stretches lingering in some areas through the day and an added wind chill factor due to fresh and gusty easterly winds.

Very cold night with a widespread sharp to severe frost setting in. Scattered wintry showers will continue overnight, mainly confined to the eastern half of the country as long clear spells develop elsewhere. Winds will ease to a light or moderate northeast breeze. Temperatures dropping to between -5 and 0 degrees with icy stretches.

WEDNESDAY: A bright, crisp start tomorrow morning for many areas with lingering frost and ice. It will be very cold again with wintry showers of sleet or snow mainly affecting north Leinster, east Ulster and the midlands. Many areas elsewhere will stay dry with sunny spells. Highest temperatures of 1 to 3 degrees, in moderate easterly breezes.

Largely dry, cold night with isolated wintry showers and clear spells. However rain, sleet and snow will move into the southwest overnight as southeasterly breezes freshen. Winds will become strong and gusty across the southwest. Lowest temperatures of -4 to +1 degrees with frost and ice forming, coldest in Ulster.

Thursday: Sleet and snow will slowly extend northwards from the southwest across much of Munster, Connacht and Leinster, with snow accumulations leading to hazardous conditions. Highest temperatures of 1 to 3 degrees. Feeling colder in fresh and gusty southeast winds, strongest in western and southwestern counties.

Remaining breezy overnight with sleet and snow continuing to fall over much of the east, midlands and north leading to further accumulations. However, precipitation will turn to rain in parts of the south and west. Lowest temperatures of -1 to +2 degrees with fresh southeasterly winds.

Friday: Some lingering falls of sleet and snow in the eastern half of the country, with outbreaks of rain elsewhere. More persistent rain will move into western counties during the evening. Southeast breezes will strengthen during the day, becoming strong and gusty in coastal counties. Highest temperatures generally of 1 to 4 degrees, however less cold in southwestern counties with highs of 5 to 8 degrees.

A wet, windy night with rain turning to snow over the north, east and midlands, leading to some accumulations. Cold night for many, with lowest temperatures of -1 to +2 degrees however much of Munster and southern Connacht will be less cold with lows of 4 to 7 degrees. Fresh to strong and gusty southeast winds.

Saturday: Windy with outbreaks of rain, possibly continuing to fall as sleet and snow in Ulster and north Leinster for a time. Southeast winds will be fresh to strong and gusty. Remaining cold across the north, east and midlands with highest afternoon temperatures of 1 to 5 degrees, a few degrees milder elsewhere. Windy overnight with further falls of rain, heavy in places, possibly turning wintry in parts of the north and east. Lowest temperatures of 0 to 4 degrees, with milder conditions persisting in the southwest.

Sunday: Current indications suggest Sunday will remain unsettled with breezy conditions and further rainfall. Some uncertainty regarding temperatures, with a possibility of colder and wintry conditions persisting in eastern areas.