Will there be snow? Met Éireann weather forecast for the week ahead #SNEACHTA 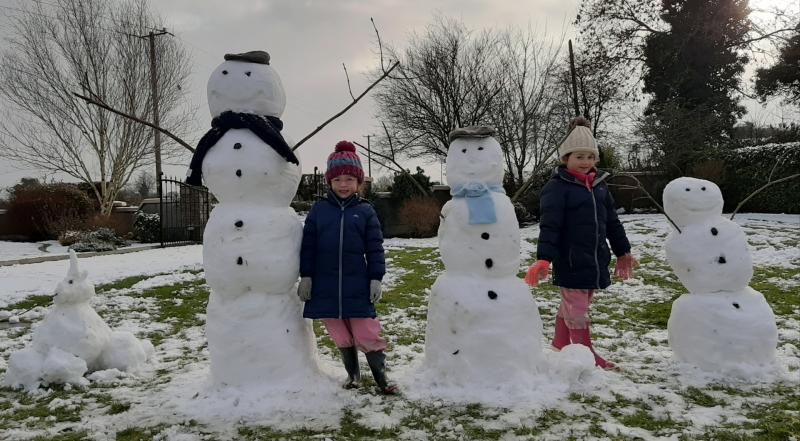 Erin and Evie Murray from Mullinalaghta enjoying the weather with their three snowmen and snow unicorn on Sunday morning, January 24 Picture: Micha Jennings

Ireland has escaped Storm Darcy which dumped a lot of snow in Europe and the UK but Met Éireann says we will not avoid 'accumulations' in the week ahead as the bitterly cold weather pushes east over the country.

Covid-19 testing had to be stopped at the weekend in the Netherlands was hit by its first major snowstorm across Europe in a decade as cold weather from Russia pushes further east over Europe. A Code Red alert was declared by forecasters there who named the storm on Friday. Darcy brought snow to other European countries.

The storm did not hit Ireland but the cold weather has hit and Met Éireann expects the bitter conditions to deliver snow from the start of the week in parts and spreading elsewhere as the week progresses with 'accumulations' later this week.

The cold front from the east, which is similar to the Beast from the East in 2018, is holding off weather from the Atlantic but this will not last.

Met Éireann's summary national outlook sums up what is expected when the two meet over Ireland this week. "Very cold with wintry showers out to midweek. More widespread falls of sleet and snow later in the week".

The forecaster says the snow will begin on Monday falling in the eastern half of the country but it will spread more extensively through the week though some respite is expected at the weekend. Thusday is looking like it will bring the most snow.

"A very cold day on Thursday as rain, sleet and snow spread northeastwards across the country, with accumulations leading to hazardous conditions," said the forecaster.

Just like the Beast from the East, the cold front could hang around for weeks.

Met Éireann's official forecasting partners in the UK  says in its long term forecast to March 7 that wintry conditions could persist.

"There remains a greater than the normal threat of disruptive winter hazards for all areas through this period, with snowfall possible for all areas, but most likely in the east," said the Met Office.

Storm Emma followed the Beast from the East in 2018. It struck Ireland between late February and early March causing significant snow.

Met Éireann said last week it is on high alert for the cold weather and warned of significant and lasting snowfalls depending on where the Atlantic weather meets the cold front. SEE MORE IN WEATHER SECTION.

Here is the latest cloud and rain forecast from our HARMONIE weather model. It covers the period from now until 06:00 on Wednesday.

MET ÉIREANN NATIONAL FORECAST Issued at 8.20 am on Monday, February 8.

MONDAY: Very cold and breezy today. Scattered showers of sleet and snow will move in over the eastern half of the country, with largely dry conditions and sunny spells elsewhere. Highest temperatures of just 1 to 4 degrees with an added wind chill factor in mainly fresh easterly winds.

Very cold with showers of sleet and snow drifting further inland and becoming more frequent at night. Lowest temperatures of -3 to +1 degrees with widespread sharp frost and icy stretches forming under clear spells. Moderate to fresh easterly winds, strong at times in the southwest.

TUESDAY: Another cold and breezy day tomorrow, Tuesday. It will be bright in many areas with sunny spells, but scattered showers of sleet and snow will continue through the day, most frequent over the eastern half of the country. Afternoon temperatures of just 1 to 3 degrees, again with an added wind chill factor in mainly fresh easterly winds.

Very cold tomorrow night with frost and icy stretches forming under long clear spells. Scattered showers of sleet and snow will become confined to the east and northeast, with largely dry conditions elsewhere. Lowest temperatures of -4 to 0 degrees in a light to moderate northeast breeze.

Wednesday: Wednesday will be another cold but rather bright day. It will remain dry in many areas but scattered wintry showers will continue to affect north Leinster and east Ulster. Frost and ice will linger through much of the day as afternoon temperatures reach just 1 to 3 degrees in a light to moderate easterly breeze.

Isolated wintry showers in the east and northeast on Wednesday night but mainly dry elsewhere to start. However, a band of rain, sleet and snow will gradually push into the southwest overnight. Very cold again with lowest temperatures of -3 to +1 degrees, with widespread frost in moderate easterly winds.

Thursday: A very cold day on Thursday as rain, sleet and snow spread northeastwards across the country, with accumulations leading to hazardous conditions. Quite breezy also with fresh southeasterly winds. Afternoon temperatures of just 0 to 3 degrees generally.

Further falls of snow in Ulster and Leinster on Thursday night, with outbreaks of rain elsewhere. Lowest temperatures of -1 to +3 in fresh southeasterly winds.

Friday: There is some uncertainty in the exact details for Friday. Current indications suggest that sleet and snow will continue for a time in Ulster and north Leinster with outbreaks of rain elsewhere. Highest temperatures of 1 to 5 degrees over Ulster, Leinster and north Connacht and 6 to 10 degrees elsewhere.

Further outlook: Less cold at the weekend with showers or spells of rain.