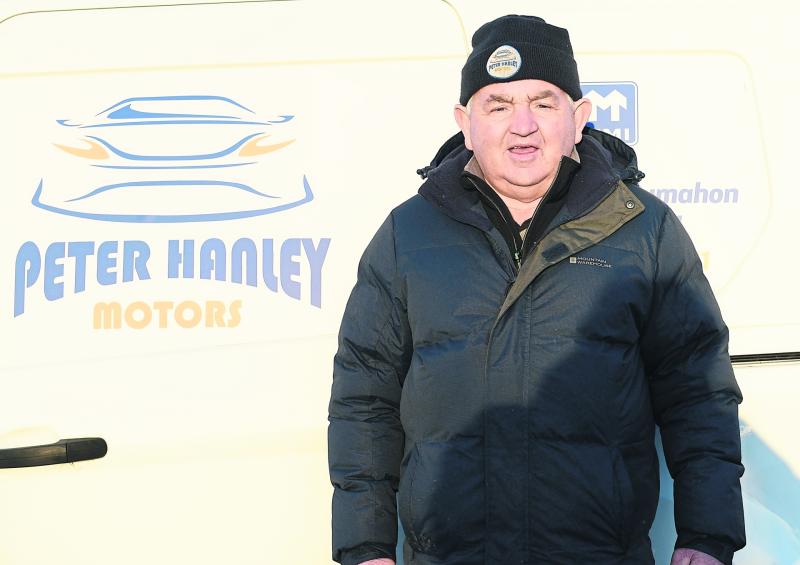 The 69-year-old Newtowncashel native successfully emerged from the rigours of a virus, which has already claimed almost 3,000 deaths nationwide, last Tuesday (January 19).

Now, the best part of three weeks on, Peter has spoken for the first time of his own brush with mortality as the country tries desperately to stem the tide of a virus which has wreaked havoc across almost every sector of Irish society.

Despite suffering from an underlying health condition sustained as a result of a road traffic accident several years ago, the free talking former Bord na Mona employee, said he never once let the challenges or threats posed by Covid-19 to get the better of him.

“I had the sick stomach and the headaches and then there was the fact that my lungs aren’t the best after an old crash I had a lock of years ago,” he told the Leader.

Part of that get up and go approach saw Peter take to starting up his own form of mental and physical exercise whilst in the midst of a 14 day period of self isolation.

“Be Jesus, I wasn’t tired, no,” said Peter, when asked about whether fatigue was one of his many symptoms.

“My daughter Laura got an online video, which helped me keep track of my oxygen and I didn’t let it go down below 90 (SpO2) because if I did, I knew I would have to go to hospital.”

In a bid to uphold those figures and his own respiratory well being, Peter recalled completing 12,000 steps in a day, all within the confines of his own bedroom.

“What I did was, I just got an old film, put it on and it kept me concentrated,” he reminisced.

Looking back on his own diagnosis, Peter is still at a loss as to how he contracted the virus and somehow managed to prevent spreading it to his wife Liz and near 20 strong workforce.

“I haven’t a clue,” he said simply. “She never contracted it and stayed away from me the whole time.

“But I remember feeling shivery cold that Saturday and I just thought I was getting a cold.

“I went home that night and didn’t say anything to anyone, got up on the Sunday and worked all day at a lawnmower I had at the house.

“There wasn’t a loss on me, so on the Monday I got up and though I felt a bit groggy, I went into work and passed no remarks.

“It was the following day when I got up out of bed, I just said to Liz to call the doctor as my chest was bad. But he said he wouldn’t go near me until I had a Covid test and it was the next day when it came back positive.”

A well respected businessman for the best part of half a decade, the name Hanley is synonymous with enterprise, resolution and no shortage of success.

Peter has been very much front and centre in helping to mould that sense of ingenuity not just within the boundaries of south Longford, but right across the wider midlands region.

It’s a virtue which has served him well, both from a commercial and personal standpoint.

“I would be half mad anyway,” he joked, as he looked on from the forecourt of his car dealership in Ballymahon.

Dedication and perseverance are two character traits you get the impression Peter adheres to closely, attributes which have and continue to serve him well despite the fiscal obstacles posed by Ireland’s ongoing public health emergency.

“Ah sure, I will probably take the boots off someday, but then they’ll probably be back on me in the garage at home,” he said, while responding to thoughts of retirement anytime soon.

“We have 16 or 17 full time lads in there and a few young fellas that come in of a Saturday, it’s a great team we have.”

This year marks Peter’s 52nd year at the helm of a family business which is undeniably one of Co Longford’s most revered names in its motor dealership fraternity.

His take on the current financial malaise affecting the local and wider economy is as predictable as it is candid.

That said, his appraisal on the Government’s own handling of the pandemic is indisputable.

“The lockdown looks like it’s here to stay for a while, doesn’t it?” Peter asked inquisitively.

“But I have to say the Government are doing a fantastic job, unreal.

“Sure, business is hard at the minute, but I haven’t had to let any of the boys go. There was a bit of worry around the Christmas and I didn’t want them going onto the €350 (Pandemic Unemployment Payment) a week.”

A deeply cherished figure in the world of local GAA, Peter could, and perhaps should, have enjoyed a longer playing career than he ultimately enjoyed.

By his own admission, personal and professional ambitions took precedence, something he contended was the right decision in the long run.

“Ah sure, I wasn’t much good at it, to be honest,” he said, revealing his favoured position was that of taking up the role of a no nonsense corner back.”

“I was working in Bord na Mona at the time and I was trying to get a business up and running at the same time.

“The way I looked at it was I was only getting in a big man’s way.”

Having overcome coronavirus, life, it would seem, could not be any better for Peter and he concluded by thanking everyone for the messages of the goodwill he has received.