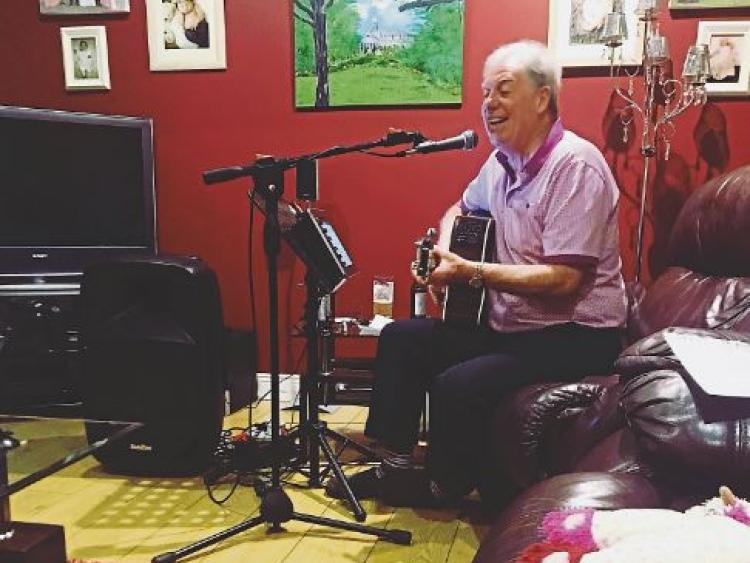 He may be one of the most instantly recognisable faces in Irish country music and now Sean Hussey is fast becoming one of social media’s fastest growing stars.

The Longford native, like umpteen musicians, has seen his livelihood and an industry he has become a mainstay of, virtually disappear overnight due to the continued spread of Covid-19.

In response to those setbacks, the genial father of three has switched his focus from the ballrooms to peoples sitting rooms courtesy of a two hour live Facebook concert every Sunday night.

It was a move which Sean confided was thrust upon him, more out of necessity than choice as Ireland’s battle to stem the tide of coronavirus took hold towards the early part of last year.

“I remember Paddy’s Day and my diary had been full, but within the space of two days the whole lot was gone,” he reflected with more than a hint of melancholy.

“At first there was a bit of relief because I was actually able to enjoy the weekend and as the weeks went by with the weather being as great as it was it felt like an extended holiday.”

Those attitudes would swiftly change course, however, as the looming reality of a prolonged period away from the live stage began to set in.

As those emotions grew, so too did questions from Sean’s loyal but restless fan base in terms of ensuring country music, and in particular his own industry niche, remained steadfast in the midst of a worsening public health emergency.

Little did he know then that the answer would come in the form of arguably social media’s biggest and most popular networking platform engine-Facebook.

“People just started asking when I was going to be back playing again,” said Sean.

“I had seen how a few bands had gone on Facebook Live so I said to myself: ‘Jees, I’ll give that a shot too’.”

The Longford Town soccer fanatic’s first foray onto Ireland’s online marketplace came in April with audience numbers rising from an initial “30 to 40” to the hundreds it now boasts each and every week.

Aside from enabling him to practice and put the finishing touches to new material, the decision to take to Facebook brought with it plenty of unforeseen but welcome benefits.

“What it showed me was how important it was to people because so many have since said it was their only form of entertainment and helped take them away from the news and all the talk of the virus,” he said.

“And it helped me too in that I also was able to learn new songs. It kept me going through it all.”

Those same sense of emotions were in rich evidence over the holiday period too as Sean, together with leading figures from the world of local music such as Paul Hennessy, Seán Ó Cinnéide Pat Elvis Barlow, Maeve Donnelly and Erin Ross treated residents at three Longford nursing homes to a festive sing along.

Add in his new found claim to social media fame and it's hardly surprising to hear the proud Longfordian in such positive form during his interview with the Leader.

Such has been the popularity of his live concerts, Sean now dedicates a couple of hours each Monday in running an eye over the numerous comments which are posted over the course of his two hour gigs.

Birthday requests are even catered for too, something you get the impression Sean gets more than a proverbial kick out of.

“I just go on Facebook Live, my amplifier and all my equipment is there as is a tripod and I just play away.”

It’s very much a shot into the unknown for a dedicated family man and proud Longfordian who spent over three and a half decades manning the fort at former Longford engineering firm Cameron until redundancy came to his door in 2016.

By his own admission, the hiatus engulfing an industry he has given 50 years of his life to is not one which may trouble him as financially as others.

That said, Sean is fully cognisant of the pressures which have been forced on many of his contemporaries overnight as he, himself, yearns for the day when live music is eventually given the green light to make its long awaited return.

“I’m in a lucky position in that I am retired from work for a few years ago,” he said.

“Don’t get me wrong, the money was great but I really do feel for the smaller musicians out there.

“I would love to see the whites of peoples eyes playing again and please God we will get back to it.”

Returning to some form of normality is a desire which is clearly not lost on the free talking Longford musician and his wife Mary.

“She has seen more of me than she ever has,” joked Sean, somewhat sarcastically.

“We are doing good. We have our own little routine where she does her thing and I do mine.

“She would go out walking with her friends and I do the same because you can’t be living in someone’s space 24/7.”

Routine is a virtue Sean pays a great deal of credence to and is one which came in for particular frustration only a matter of days ago as the county entered its third lockdown.

“This year would have been 26 years in the Tally-Ho with me playing every New Year’s Eve and this was the first year I was forced to miss it.

“That was hard, but please God I will be back there next year.”

For now and for the interim Sean’s staunch legion of fans, instead of dressing up, will have to content themselves with logging on to Facebook Live each and every Sunday night as the war against Covid-19 rages on.