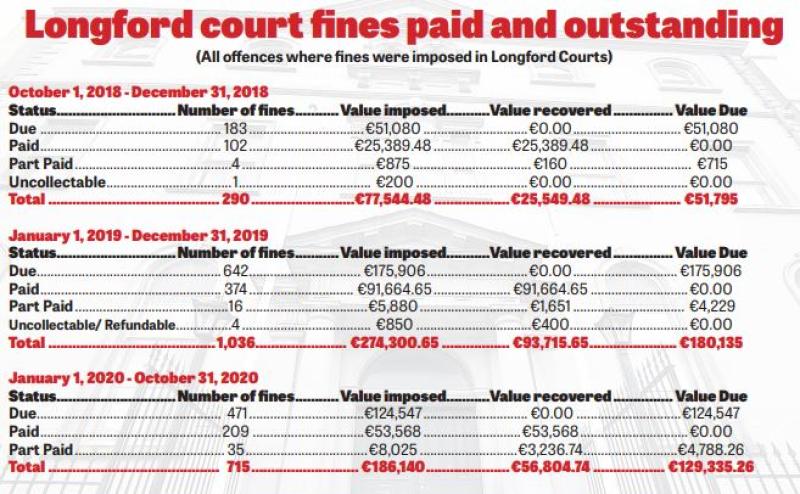 People are “milking” Longford's judicial system by openly choosing to go to prison rather than pay court imposed fines, a special Leader investigation has found.

According to a series of documents released to this newspaper, hundreds of thousands of euro are going unpaid each year with over two thirds of monetary sanctions issued at Longford District Court level yet to be recouped.

Those figures look set to worsen by the end of 2020 with close to €125,000 out of an overall total of €186,000 by the end of October having yet to be handed into Courts Service officials.

Fines, by their nature, are imposed by the courts on offenders as a sanction for a criminal offence and are a less severe option than community service and imprisonment.

A system allowing the payment of fines by installment was ushered in under the Fines Act 2014 in a bid to end the mass committal to prison of people unable to pay fines in one go.

Those commitals threw up a massive administrative burden on the prison system and on gardaí, with the bulk of those committed released within hours or the following day. Details of the Leader’s investigation this week has caused much angst at local political level amid claims from Joint Policing Committee (JPC) member Cllr Paraic Brady, alleging a growing cohort of people are “milking the system” and getting away “scot free” from facing up to any criminal punishment.

Aside from in excess of €361,000 which is still owed to the State by Longford courts, it would appear local taxpayers are also being hit in the pocket by rising interpreter costs and everyday maintenance expenses connected to the county town’s courthouse headquarters.

Close to €30,000 has been paid out to interpreters in defending people appearing before Longford Courts between October 2018 and October 2020 with over €92,000 having been spent on the general upkeep and preservation of Longford Courthouse.

The vast sums still owed to the taxpayer has led to claims of a “broken” system and calls for fines to be taken from a person’s weekly or monthly earnings.

“The system is broke,” said Chairperson of Co Longford’s Joint Policing Committee Cllr Seamus Butler. “Those orders should be made on any kind of income, including social welfare because the dogs on the street know there is no reason to pay a fine because there is no penalty for it.”